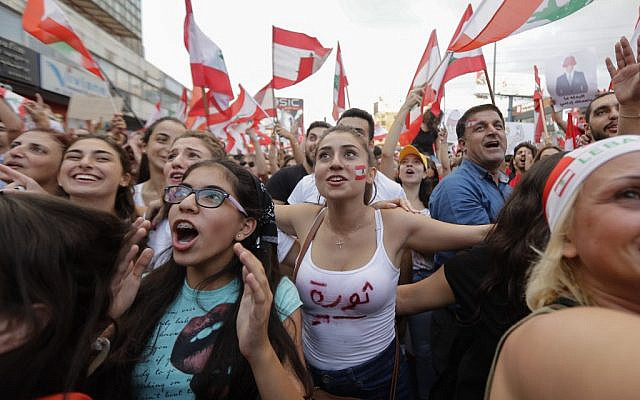 Hezbollah Terrorists Can Kill But Not Govern

The World Bank called on Lebanese authorities Wednesday to urgently form a new government that can address the country’s worsening economic situation. The institution warned that the small Mediterranean nation “does not have the luxury of time to waste.” Meanwhile, Hezbollah thinks it can wait out both the protesters and the fast sinking Lebanese economy. Hezbollah terrorists can kill but not govern.

The stark World Bank warning came in a statement issued after a meeting between the World Bank’s regional director and President Michel Aoun. The ongoing mass protests continue.

Prime Minister Saad Hariri resigned his government on Oct. 29 in response to the unprecedented Lebanese protests. The protesters erupted over proposed new taxes. Since, their demands snowballed into calls for the government to resign and for the entire political elite to step aside. The political elite has pilfered Lebanon into economic oblivion. Protesters are demanding accountability and return of all funds. Hezbollah encouraged and established this elite.

The protests have paralyzed the country. Banks were closed for two weeks and imposed capital controls since re-opening Friday, in a bid to hold onto dollar reserves, but deepening the uncertainty.

Lebanon, one of the most heavily indebted countries in the world, already was dealing with a severe fiscal crisis before the protests began. One rooted in years of heavy borrowing and expensive patronage networks run by entrenched political parties. The Lebanese pound is already trading at up to 2,000 to the dollar on the black market. This represents a devaluation of up to 30% from the official rate.

The protesters are calling for the formation of a technocrat government that would get to work immediately on addressing Lebanon’s economic crisis. They accuse officials, tom include Hezbollah in firm control of Lebanon’s political establishment, of dragging their feet. Hezbollah hopes it can wait out both the protesters and the collapse of the economy.

HEZBOLLAH TERRORISTS CAN KILL BUT NOT GOVERN

The politics has most attention, but economy has the most risks. With every passing day, the situation is becoming more acute and this would make recovery extremely challenging. Lebanon does not have the luxury of time to waste to redress issues that need immediate attention.

In its statement, the Word Bank suggested poverty could rise to 50% if the economic situation worsens.

Aoun’s office said the president assured the World Bank delegation that the next government will include ministers and experts with credibility and no record of corruption. However, there were no signs of serious talks between politicians on the shape and form of the new government. The process typically takes weeks or months of political wrangling.

On Wednesday, protesters rallied outside state institutions and ministries to keep up the pressure on officials to form a new government. Dozens of people gathered outside the justice, education and the state-run electricity company and the tax department.

In their third week, protesters have adopted a new tactic of surrounding state institutions to disrupt their work.

The protesters agreed on Tuesday to shift the focus of the protests and open main roads to ease up traffic.

Hezbollah Terrorists Can Kill But Not Govern