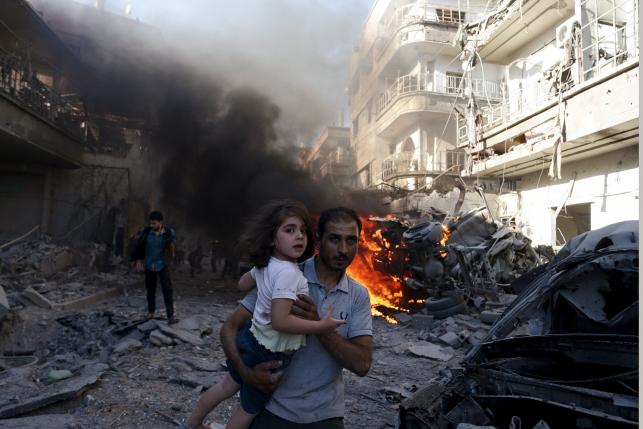 Syrian government air strikes on areas east of Damascus have killed 247 people in the last 10 days, including 50 children, and wounded 1,000 more people, activists on the ground told Reuters.

There is heavy Syrian civilian toll the result of terror strikes from both the Assad regime and the Islamists.

The attacks on the rebel-held Eastern Ghouta region included Aug. 16 air strikes that killed 117 people in a marketplace in Douma, some 15 km (10 miles) northeast of the capital. The area is besieged by government forces.

A rescue service operating in the rebel-held region, the Civil Defense, has documented 265 deaths, including 44 children and 33 women in the same period, said the spokesman for Rif Damascus – the rural area around the city. Speaking to Reuters via the internet, he put the wounded at 1,200.

The Civil Defense has declared Douma a disaster zone because of heavy Syrian civilian toll.

The air strikes near Damascus have coincided with a wider intensification of the four-year-old civil war estimated to have killed around a quarter of a million people and driven more than 11 million from their homes.

Fighting between government forces and rebels has accelerated on numerous fronts in western Syria.

Activists reported fighting between rebels and government forces and militias fighting alongside them on Tuesday in the Eastern Ghouta town of Harasta, the target of a recently launched rebel offensive against government

The United States said the Aug. 16 air strike in Douma showed Assad had lost legitimacy and called for “a genuine political transition”. But Syria’s political opposition said the protracted conflict could not be resolved if such attacks went unpunished.

Government-held Damascus, the seat of Assad’s power, has also been struck in a surge of rocket fire this month. Since Aug. 13, activists said rocket fire on the city has killed 27 people and wounded dozens more.

In this civil war, the heavy Syrian civilian toll caught between the savagery of Assad and the barbarism of ISIS is feeding into the terror machine in Syria.