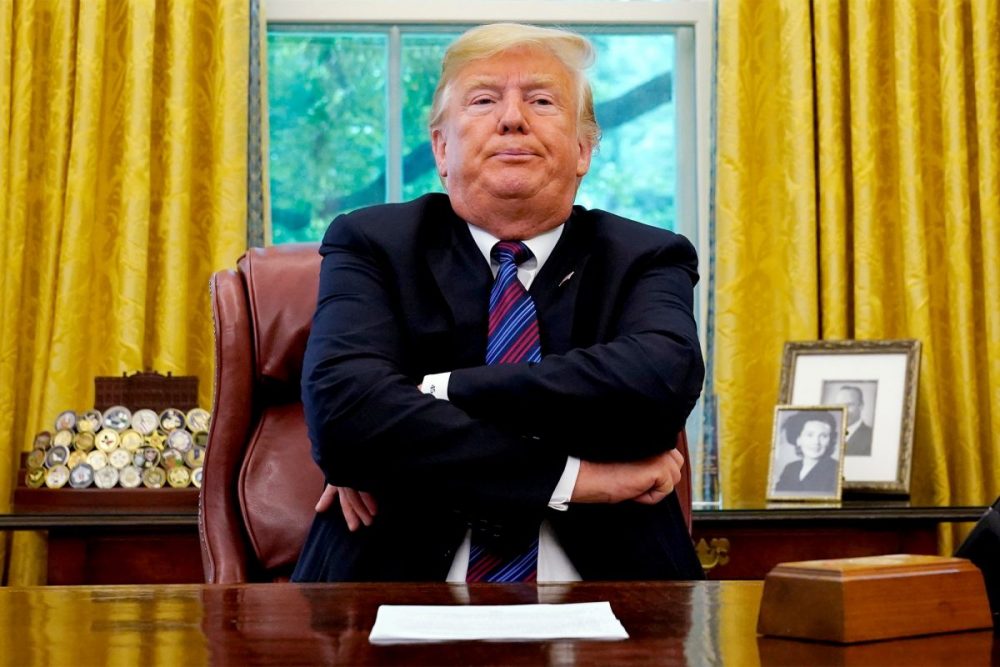 Has Donald Trump Become a Liability for Israel?

August 31, 2019 8:53 pm 0
To Truly Weaken Iran the United States Must Assassinate Assad
Everything Putin Would Do To America Trump is Doing
America Deserves Better Than an Anarchist President

There is no doubt that President Donald Trump is an avid supporter of Israel. Not out of a thoughtful stratagem, rather, out of a quick-draw, shoot first, pants-on-fire approach. Lately, though, one cannot but wonder has Donald Trump become a liability for Israel.

The American-Israeli alliance is unbreakable. It is based on both common interests and common values. Any other U.S. ally in the region comes way short on common values, which could sour the alliance and turn an ally into a lethal enemy (i.e. Saddam Hussein). Not so with Israel. Barack Obama recognized this fact, which is why he went the extra mile to mask the real goals of his Iran Deal.

Lately, however, one cannot but ask this intrepid question: Has Donald Trump become a liability for Israel? The diversion of their tactics is apparent to many. When Israel works so hard at making friends, Donald Trump makes it so easy to pile more enemies with every tweet.

That was clearly apparent when Israel President Reuven Rivlin called on Speaker of the House Nancy Pelosi to express Israeli neutrality when it comes to U.S. party politics. It happened right after Donald Trump accused American Jews of disloyalty if they vote for the Democratic Party. Unprecedented and 100% caused by Trump.

After this grotesque faux pas, the number of Americans who call our president “an idiot” may have doubled. At least, we think so.

HAVE YOU BECOME A LIABILITY?

After many decisions Trump made to favor Israel on many fronts, Israelis must ask this question of Trump: Have you become a liability Mr. President because of the enmity you spark with anyone, at any time? Can Israel afford to be so closely associated with Donald Trump to the point of losing its identity? One that pursues the policy of co-existence with such determination and resolve? Trump may be taking Israel for a ride it cannot afford to travel given the enemies he’s made on the global stage.

There is no doubt the president’s U.S. embassy move to Jerusalem and acquiescing to Israeli annexation of the Golan Heights have given Israel a boost. Behind the scene, Trump’s commitment includes the absolute security of Israel in case Khamenei loses his mind.

Not a story for the pixels of public screens, but it is almost a certainty the president, like many before him, made it clear the United States will defend Israel with its mighty military. Even though the defense of Israel is a U.S. institutional premise that may oscillate depending on the country’s electoral mood, a president’s assurance and commitment go a long way to appease the fears Israel may harbor from those who intended it much harm.

The president has also made ancillary decisions to help Israel indirectly. Such as not abandoning MbS at a time when the Saudi prince is as committed to defeating Iran. These semi-secret alliances between Arabs and Jews help Israel on the defensive front. Arab forward military bases, in essence, become Israeli forward weapons of defense.

Trump’s racism, rhetoric, and his ability to turn friends into foes impacts Israel even if the signs are unclear yet. Few countries whose leaders dislike our president and who teeter on supporting Israel with regard to its Iran policies may find it hard to ignore the guilt by association on display when an Israeli government is beholden to the personae of Trump. What they may say publicly may betray how they feel privately.

At this point, it may be better for Israel to distance herself from Trump. What benefits can Israel harvest from a U.S. president whose personality is a global magnet for criticism? Israel needs the U.S. to protect her from Iran; but she also needs, in the long-run, to turn her foes or straddlers into real friends.

Sometimes dumb friends make mistakes that could get you in deep trouble. On that basis, it is logical to ask whether distancing oneself from Trump may not be in Israeli best interests. In the long run where it matters the most.

Has Donald Trump Become a Liability for Israel?