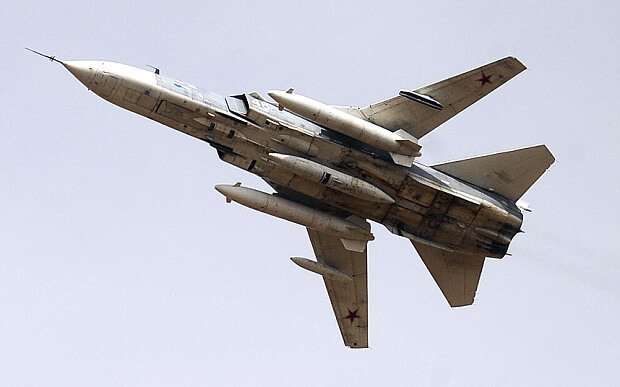 TFS Note: If you ever drove a Volga, you know how bad Russian jet fighters are.

Russian warplanes sent to Syria to back the regime of Bashar Assad are breaking down at a rapid rate that appears to be affecting their ability to strike targets, according to a senior Defense official.

Nearly one-third of Russian attack planes and half of its transport aircraft are grounded at any time as the harsh, desert conditions take a toll on equipment and crews, said the official who was not authorized to speak publicly about sensitive intelligence matters.

The Russians appear to be having difficulty adapting to the dusty conditions, and the number of airstrikes they have conducted seems to have dipped slightly.

Russian President Vladimir Putin deployed warplanes, including Russia’s advancedFullback ground-attack jet, helicopters and troops to a base near Latakia, Syria, in September. In addition, at least a dozen transport planes have been stationed there.

“They could have bad operating procedures, inadequate supplies of spare parts and support crews,” Aboulafia said.

Russia’s inexperience deploying forces at some distance, unlike their military actions in bordering countries such as Ukraine and Georgia, could also account for problems keeping planes in the air, he said.

“An awful lot of expeditionary warfare revolves around logistics,” Aboulafia said. “A lot of it comes down to experience. They don’t have that much of it.”

For U.S. warplanes, readiness rates of less than 80% would attract attention from top brass, said a senior Air Force commander with multiple combat deployments in the Middle East. The officer was not authorized to speak publicly about the matter. However, the officer noted that planes break, especially in austere, deployed conditions. He characterized mission-readiness rates of less than 80% as a matter of concern, not alarm.

David Deptula, a retired three-star Air Force general who led planning for the air war in Operation Desert Storm, said the rates for American fighters in combat zones has been above 90%. The readiness rate of 70% for Russian fighters isn’t surprising, he said, because they lack experience being deployed and have been flying their jets hard. He called their rates for cargo planes, “pretty low.”

“If those rates are accurate, it indicates that their deployed logistics function requires some attention,” Deptula said.

U.S. pilots and aircraft have flown combat missions in the Middle East almost continuously since the first Gulf War. They struck Saddam Hussein’s forces to push them from Kuwait, patrolled no-fly zones in Iraq for more than a decade, and fought wars in Iraq and Afghanistan. Last year, they returned to strike Islamic State militants on the ground in Iraq and Syria.

Last week, the Pentagon and Russian military reached an agreement to avoid conflict among pilots flying missions in Syria. Defense Secretary Ash Carter on Friday said the Russian attacks have targeted opponents of Assad in Syria, where the civil war has killed more than 200,000 people.

“What the Russians are actually doing is buttressing the Assad regime, which, as I have said, will have the effect of fanning the flames of the civil war,” Carter said. “And very few of their strikes have been directed toward ISIL, which is the reason why they said, initially, they were getting into the fight. So the Russians are on the wrong side of this in every way, and they’re going to contribute to the violence and the tragedy of the civil war that’s been going on now, all these years.”

Russian lawmakers said Sunday that Assad would be willing to call early elections, the Associated Press reported, but only after the defeat of “terrorist” groups, which is how the government refers to all of its armed opposition.