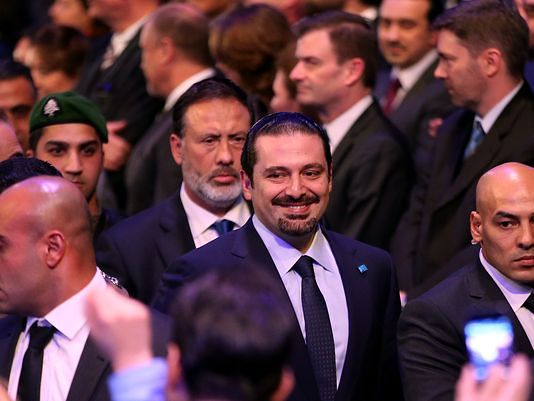 Hariri calls on Hezbollah to withdraw from Syria

(BEIRUT AFP) — Former Lebanese Prime Minister Saad Hariri called on the militant Hezbollah group on Saturday to withdraw from Syria, saying their involvement in the civil war next door has backfired into Lebanon.

Hariri returned earlier in the day to Lebanon from self-imposed exile to mark the 10th anniversary of his father’s assassination, a slaying that sharply divided Lebanon.

Rafik Hariri was killed with 21 others in massive truck bomb on a Beirut seaside road on Feb. 14, 2005.

Hariri is a harsh critic of Hezbollah and Bashar Assad, whom he accused in his speech Saturday of “destroying Syria on the heads of Syrians.”

Hezbollah has sent fighters to Syria to back Assad’s forces against rebels trying to remove him from power. The armed intervention in Syria earned the Shiite group the enmity of Syria’s predominantly Sunni rebels. Assad is a member of the Alawite sect, an offshoot of Shiite Islam.

“Withdraw from Syria. Stop dragging the fires from Syria to our country, at times from terrorism and at other times from the Golan and tomorrow from we don’t know where,” Hariri said referring to a wave of bombings that hit Lebanon over the past year, killing dozens.

Hariri’s comments came as Syrian troops and Hezbollah are on the offensive in an attempt to capture rebel-held areas on the edge of the Golan.

Last month, an Israeli helicopter attack destroyed a unit near the front line of the Golan Heights killing seven, including an Iranian general. Hezbollah struck back from south Lebanon killing two Israeli soldiers and wounding seven.

Hariri’s father was Lebanon’s most prominent Sunni politician. A United Nations-backed tribunal is trying in absentia five members of the militant Hezbollah group, the country’s most powerful Shiite faction, for the bombing.

Hariri said Hezbollah’s refusal to hand over the suspects is a main reason behind Sunni-Shiite tensions in the country.

Saturday’s visit marks Saad Hariri’s second return to Lebanon after four years in self-imposed exile. Hariri visited Lebanon briefly in August. He left Lebanon in January 2011 after his government was brought down by Hezbollah and its allies.

Hariri calls on Hezbollah to withdraw from Syria