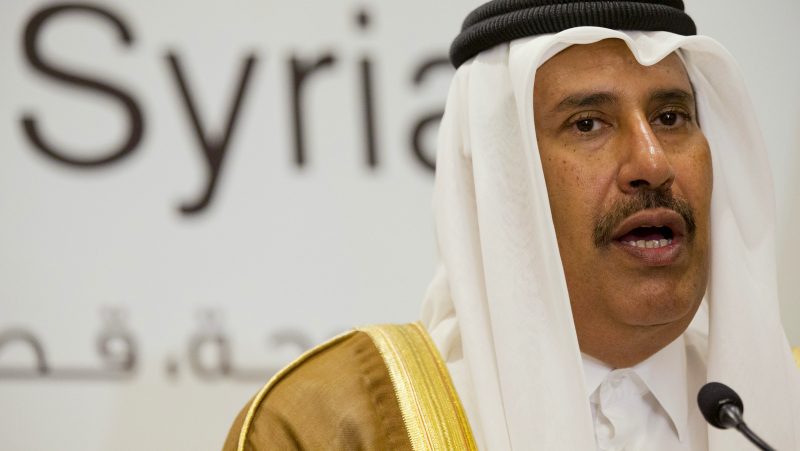 December 10, 2011 1:03 pm 0
Like Horses on the Auction Bloc
Message to the CIA: When the Attack Dog is at Your Throat, Don’t Fiddle with his Cage Key
Who Will Protect the Minorities of Syria?

What would you say if I told you that a Qatari envoy, and a member of al-Thani family, is a guest at the Quality Inn in Tripoli, Lebanon with one mission in mind: Disburse large sums of cash inside Syria for the people to support the SNC, which also means No-Fly Zone, no NATO, and no self-defense. We say, hands off Syria Arab League.

Every banner raised is worth 5,000 Liras ($100) and every Video hosted on YouTube is worth 10,000 ($200). Understanding the economic pressure Syrians are under, the Qataris, with Muslim Brotherhood duplicity, are not only buying popularity, but they are also driving the Syrian people to commit suicide by supporting an agenda contrary to their interest.

This comes from inside the SNC.

Meanwhile, Baschar al-Assad has given Homs 72 hours to surrender or else he will bomb the city to smithereens. We are watching another Hama in slow motion, except this time it is induced by not only Assad but also by the Arab League eager to protect itself from any present or looming danger.

The Assad government denied reports it intends to bomb Homs and instead claimed, through a spokesman for the Syrian foreign ministry that: “The Syrian forces are there to protect civilians and maintain law and order that is breached by those who are carrying arms against the State”.

Key words are “Maintain law and order”, which essentially means kill at will.

Today, Syria resembles a wedding cake. People admire its grandeur (The Arab League) but when slicing the cake, you start at the bottom (The Syrian people).

Absence of a clear western policy (Not driven by the Arab League or PM Erdogan of Turkey) to see Assad deposed by any means possible by openly supporting the FREE SYRIAN ARMY must commence immediately. A supported FSA will free Syrians from the treacherous grip of the Muslim Brotherhood; as well from the various Arab and non-Arab interests pouring into Syria the way they poured into Lebanon and caused havoc in the country.

A weak Syria is a violent Syria. If we allow our neighbors the luxury of a master/slave relation in our politics, it will lead to another Lebanon.

If Syria is to be an equal partner, it must be strong, peaceful, and independent of neighborly influence third. Just look at Israel and you will understand why friends and foes deal with the State as an equal. Its leadership answers to no one but Israeli interests.

Support the organic rebellion to free the people. Don’t let the country fall prey to others the way Iraq fell prey to Iran.

What Will Happen to Syria’s Weapons?
Which is Worse: Those who Permit Violence or Those Who Refuse to Stop it?
Just Civil War in Syria? Think Again
Syria News 1213 Syrian Revolution 1335