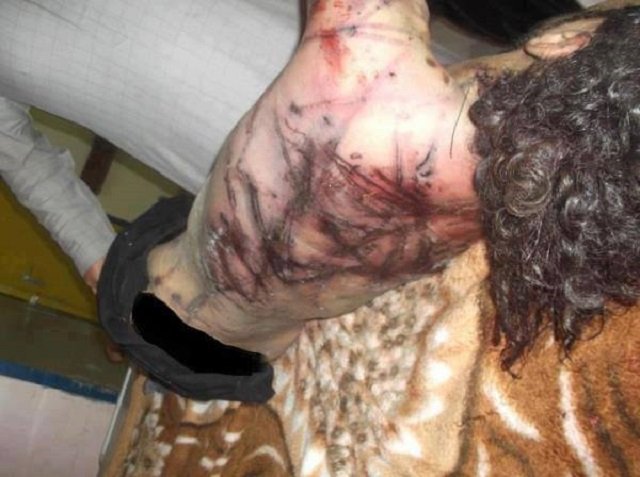 A team of internationally renowned war crimes prosecutors and forensic experts has found “direct evidence” of “systematic torture and killing” by the Syrian President Bashar al-Assad’s regime, the lawyers on the team say in a new report.

Their report, based on thousands of photographs of dead bodies of alleged detainees killed in Syrian government custody, would stand up in an international criminal tribunal, the group says.

CNN’s “Amanpour” was given the report in a joint exclusive with The Guardian newspaper.

“This is a smoking gun,” said David Crane, one of the report’s authors. “Any prosecutor would like this kind of evidence — the photos and the process. This is direct evidence of the regime’s killing machine.”

Crane, the first chief prosecutor of the Special Court for Sierra Leone, indicted former Liberian President Charles Taylor for war crimes and crimes against humanity. Taylor went on to become the first former head of state convicted of war crimes since World War II. He was sentenced to 50 years in prison.

CNN cannot independently confirm the authenticity of the photographs, documents and testimony referenced in the report, and is relying on the conclusions of the team behind it, which includes international criminal prosecutors, a forensic pathologist, an anthropologist and an expert in digital imaging.

The bodies in the photos showed signs of starvation, brutal beatings, strangulation, and other forms of torture and killing, according to the report.

In a group of photos of 150 individuals examined in detail by the experts, 62% of the bodies showed emaciation — severely low body weight with a hollow appearance indicating starvation. The majority of all of the victims were men most likely aged 20-40.

A complex numbering system was also used to catalog the corpses, with only the relevant intelligence service knowing the identities of the corpses. It was an effort, the report says, to keep track of which security service was responsible for the death, and then later to provide false documentation that the person had died in a hospital.

One of the three lawyers who authored the report — Sir Desmond de Silva, the former chief prosecutor of the Special Court for Sierra Leone — likened the images to those of Holocaust survivors.

The emaciated bodies were the product of starvation as a method of torture, “reminiscent of the pictures of those [who] were found still alive in the Nazi death camps after World War II,” he said in a CNN interview.

“This evidence could underpin a charge of crimes against humanity — without any shadow of a doubt,” de Silva told CNN’s Christiane Amanpour. “Of course, it’s not for us to make a decision. All we can do is evaluate the evidence and say this evidence is capable of being accepted by a tribunal as genuine.”

Throughout the civil war in Syria, al-Assad’s regime has denied accusations of human rights abuses and blamed “terrorists” for the deadly violence.

The report draws its evidence from the testimony of a Syrian government defector codenamed “Caesar” and almost 27,000 photographs he provided; in all 55,000 such images were brought out of the country.

According to the report, Caesar worked as photographer in the military police. Once the war broke out, his work consisted entirely of documenting “killed detainees.”

He claimed to have photographed as many as 50 bodies a day.

At one point he took the unusual step of photographing a group of bodies to show that it “looked like a slaughterhouse,” according to the report.

The fact that all the bodies were photographed, the report’s authors say, strongly suggests that “the killings were systematic, ordered, and directed from above.”

The killings may have been so thoroughly documented as a way of proving each person’s death without allowing the deceased’s family to see the body, the report suggests. Also, it may have been aimed at proving that “orders to execute individuals had been carried out.”

It is also possible that, far from being a systematic plan to document human rights abuses, the photographing was simply the way it had always been done — a little-thought-out continuation of a long-time practice.

Its release comes just days ahead of the Geneva II conference, the latest push for a diplomatic solution to Syria’s bloody civil war.

The lawyers were hired to write the report by the British law firm Carter-Ruck, which in turn was funded by the Government of Qatar, de Silva told Amanpour.

“We approached our task with a certain amount of skepticism, bearing that in mind.”

CNN was referred to Carter-Ruck, and this report, by a Qatari government official, and a CNN producer met in the Qatari capital Doha with the report’s authors.

The report says “Caesar” brought from Syria photographs of thousands of people who had been killed, he says, by the regime.

The lawyers and the three forensics experts with whom they worked were given 26,948 images on a laptop computer. They, in turn, did a “formal analysis” of images of 835 and then a much more detailed examination of 150 individuals.

The images given to CNN paint a horrific scene.

Stomachs, faces and even legs are concave — sunken, rather than convex. On some torsos, bruising and bleeding is so severe that the victims’ skin is a mosaic of black, red, purple and pink.

Oblong and parallel wounds, a mix of bruises and torn skin, line one man’s chest and torso, covering every inch of the victim’s body from neck to pelvis.

“This is not just somebody who is thin, or who maybe hasn’t had enough food because there’s a war going on,” Dr. Stuart Hamilton, a forensic pathologist who examined the evidence, told Amanpour. “This is somebody who has been really starved.”

The forensics team identified the neck bruising as consistent with strangulation with a rope, piece of rubber, or other such object, as opposed to the marks that would be left by a hanging.

“Strangulation of this kind is also consistent with strangulation being used as a method of torture,” the report reads.

Digital imaging expert Stephen Cole also offered his assessment that the images were not digitally altered or manipulated.

So why do the lawyers think that they were given “smoking gun” proof of murders by the al-Assad regime?

“In Sierra Leone I had 1.2 million human beings that were destroyed but I could not match them to names and incidents,” David Crane said. “Here we have the photographs, the photographer and the reports with documents, stamps, signatures and dates.”

Those numbers are obscured in the report released to CNN to protect “Caesar’s” identity and to hide the location of the military hospital where the photos were taken. However a CNN producer in Doha viewed the unobscured, original images.

When a detainee dies in custody, the body is sent to a military hospital where it is numbered and photographed as part of a bureaucratic record-keeping process.

This detailed numbering system, the lawyers say, is compelling evidence of the government’s deadly intent.

When a detainee was killed, the report says, the corpse was assigned a number that corresponded to the “branch of the security service responsible for his detention and death.”

The body was then taken by the security service to a military hospital.

There, the body would enter the Syrian government’s bureaucracy.

Caesar told the lawyers that he, a doctor, and a member of the judiciary would examine the corpse.

The doctor would then fill out internal paperwork, to document that he had seen the body, as well as an official death certificate, which would often list a false cause of death — like “heart attack” or “breathing problems” — to be given to the deceased’s family.

At this point, a second number would be assigned to the body, documenting its false cause of death, according to Caesar, the report says.

“As a prosecutor I have to prove a process,” Crane said. “And evidence like this, though not unusual, is rare in modern international law.” He added that he could walk a tribunal or jury through the process “line by line.”

Nice, in an interview with Amanpour, agreed. The number of bodies, the systematic way in which they were cataloged, and the effort given to obscuring their causes of death point in one direction, he said.

“You can reasonably infer that this is a pattern of behavior, which has to have higher authority,” he said.

Ever since the U.S.-led invasion of Iraq — bolstered by false evidence provided by a source codenamed “Curveball” — there has been deep skepticism in both the intelligence community and the press about believing single-source defectors like “Caesar.”

The lawyers who interviewed Caesar, including Crane whose background also includes experience in military intelligence, said they found him to be “a truthful and credible witness.”

Part of the report reads: “He revealed no signs of being ‘sensational,’ nor did he seem partisan. Although he was a supporter of those who opposed the present regime, the inquiry team is satisfied that he gave an honest account of his experiences.”

Caesar’s evidence, they say, “could safely be acted upon in any subsequent judicial proceedings.”

In September 2011, about seven months after the Syrian civil war broke out, Caesar was contacted by a man, a relative by marriage, who had fled the country just days after the uprising began.

This man is referred to in the report as “Caesar’s contact,” whom the lawyers also interviewed for the report.

The contact was working with what the report calls “international human rights groups,” and saw “Caesar” as a reliable source of information from within the country.

Soon Caesar was sending his contact thousands of images. When Caesar became concerned for his safety, his contacts in the Syrian opposition to whom he had leaked the photos arranged for him and his family to be smuggled out of Syria.

The lawyers have remained mum on how that was done, but the report says the process took four months, and that Caesar left the country before his family.

“If he wished to exaggerate his evidence it would have been very easy for him to say that he had actually witnessed executions,” the report says. “In fact, he made it quite plain that he never witnessed a single execution.”

It is unclear where Caesar and his family are currently living; the lawyers say only that they carried out their investigation in the Middle East.

Syria is not a member of the International Criminal Court. The only way the court could prosecute someone from Syria would be through a referral from the United Nations Security Council.

Because of Russia’s support for the Assad regime, and because it has veto power on the council, such a referral seems unlikely, at least for the time being.

But if, one day, the court were to take up Syria’s case, this report would almost certainly be entered into evidence.

“All we can do is put the ammunition in the pistol,” said de Silva. “It is for others to aim it and pull the trigger.”