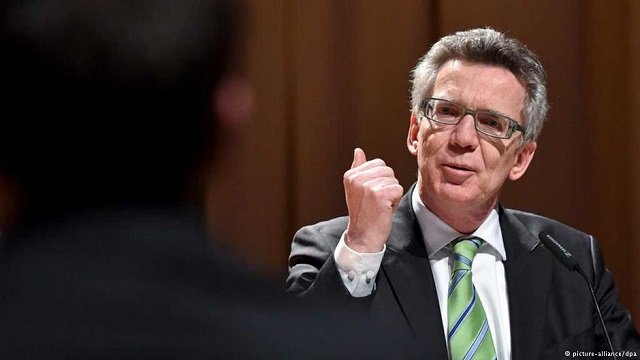 July 1, 2015 3:51 am 0
When Western Technology aids in Killing Innocent Syrians, It is Hard to Turn a Blind Eye
German Government Promoting Business with Iran Despite Existing Sanctions
Did We Reach the Limit of Syrian Tragedy?

German police have raided several offices belonging to a Lebanese support organization accused of harboring ties to the military arm of Hezbollah. The charitable organization was simultaneously banned, its assets frozen.

“Organizations which directly or indirectly work against Israel’s right to exist from German soil cannot rely on the guaranteed right to freely organize,” de Maiziere said.

The military wing of the Hezbollah organization in Lebanon disputes Israel’s right to exist and is listed as a terrorist organization by the EU.

Around 150 police officers took part in early-morning raids on properties belonging to the Essen-based group, with raids conducted in six German states in total. Police said that the employees reacted “with great surprise.” Nobody was arrested, but cash and files were seized from the offices, while authorities also froze two bank accounts containing around 60,000 euros in total.

De Maiziere said German investigators first started monitoring the charitable organization’s activities in 2009. The interior ministry said that the group had raised almost 3.3 million euros ($4.54 million) between 2007 and 2013, sending the funds to the so-called Shahid (Martyrs) Foundation in Lebanon.

That foundation is blacklisted by Germany for actively recruiting fighters for Hezbollah; investigators said that the orphans and widows they support were often relatives of suicide bombers. The foundation is also accused of seeking new recruits among the bereaved children.

“The name of this organization masks its real purpose,” undersecretary for the interior, Emily Haber, said in Berlin. “The group is not a humanitarian organization.”

The interior ministry said it had taken so long to complete its investigations in a bid to make its case “watertight.” Otherwise, the ministry said it would have expected an appeal from the group.

Article 9 of the German Constitution states that all citizens “have the right to set up clubs and organizations.” However, the article’s second paragraph stipulates that any such groups can be banned if they breach German laws, threaten constitutional order or actively work to harm understanding among peoples.

Did We Reach the Limit of Syrian Tragedy?
Can Obama say Ana Souri as Kennedy said Ich Bin Ein Berliner?
When Western Technology aids in Killing Innocent Syrians, It is Hard to Turn a Blind Eye
Radicalism 567