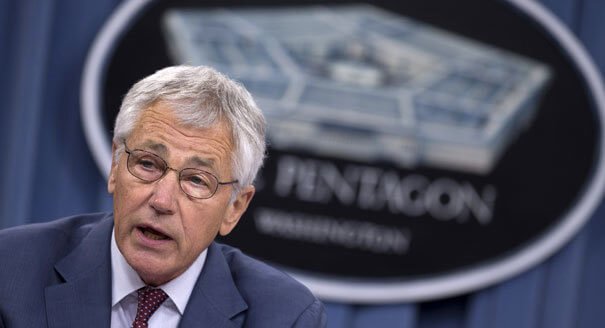 August 24, 2013 7:35 am 0
It is unconscionable to strike grain silos in northern Syria
Will Obama ask Iran to attack Israel?
Operation Noble Anvil vs. Operation Absent Conscience

President Barack Obama has tried a lot of ways to get the attention of Syrian Bashar Assad: International pressure, a “red line,” and assistance to the rebel forces fighting him. On Friday, Obama threw down another card from his deck: gunboat diplomacy.

Starting with targeted leaks and then a murky official statement from Defense Secretary Chuck Hagel, the administration warned Damascus that it has ordered U.S. Navy warships to close their ranges with Syria just in case Obama decides to order an attack.

Obama, by his own account, isn’t there yet. He told CNN earlier in an interview aired Friday that before deciding what to do next, the United Nations must formally conclude that Assad had in fact ordered the chemical weapons attack that is said to have killed hundreds or thousands of people, including women and children.

And even then, the U.S. could only move ahead with some kind of military action if it had the approval of the U.N. or a broad international consensus, Obama said.

“There are rules of international law,” he told CNN’s Chris Cuomo. “If the U.S. goes in and attacks another country without a U.N. mandate and without clear evidence that can be presented, then there are questions in terms of whether international law supports it, do we have the coalition to make it work, and, you know, those are considerations that we have to take into account.”

Another consideration that Obama did not add: Congress.

Republican lawmakers have blasted the Obama administration in the past when the president or his top officials have left the legislative branch out of their discussions about how they would proceed with military action. Several members have already offered legislation — though none has passed — that would restrict U.S. involvement in Syria.

But clearly eager to take some action now to show the Syrian government that Washington and the world are horrified, the White House elected to play its gunboat gambit.

Inside Washington, defense officials quietly downplayed the reports about the warship deployments — the Navy is not on the brink of an attack, they said; the ships have been in the region for some time; this is all just prudent decision-making.

According to The Associated Press report, Hagel told reporters aboard the aircraft carrying him to an international conference that Obama had asked for “military options” on Syria, though he declined to specify what those might be.

Besides the aircraft carrier with its roughly 80 strike aircraft, the strike group includes the cruiser USS Gettysburg and the destroyer USS Bulkeley. There may be other warships available to U.S. commanders in the Mediterranean, including fast-attack submarines whose movements the Navy does not publicly discuss.

The Harry S. Truman group was operating in the Gulf of Aden as recently as Thursday and could be tasked to sail north up the Red Sea; the Gravely called at the Israeli port of Haifa earlier this month.

If Obama marshaled some or all of these units near Syria, the amount of firepower at commanders’ disposal could be formidable. In addition to the Harry S. Truman’s strike aircraft, the surface combatants can carry many dozens of Tomahawk land-attack cruise missiles between them. Such weapons can strike targets precisely far inland without risking a human pilot, as they did in Libya and both Iraq wars.

Or Obama may go as far as to order manned Navy or Air Force warplanes to attack — The New York Times reported that his advisers are studying President Bill Clinton’s intervention in the Balkans as a possible blueprint for a Syria operation.