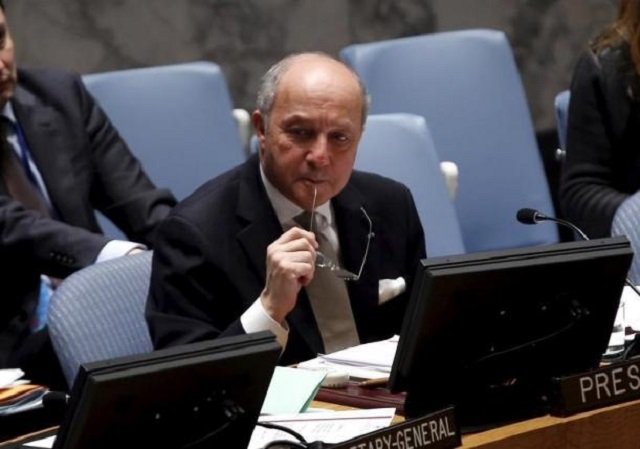 October 6, 2015 6:55 pm 0
The Good, the Powerful, and the Abused
France Teaching Obama How to Strike Terrorists
Plastic Explosives Stolen from French Military Base

France shows Obama how to lead. The U.S. President has not once proposed such a Resolution at the U.N. because Khamenei decides Obama’s policies.

The resolution has little chance of clearing the Security Council, where Assad’s staunch ally Russia has often blocked efforts to condemn him and his government, but could be seen as an alternative to a Russian resolution currently being circulated at the world body.

Western diplomats have said a resolution demanding an end to barrel bombing – something that France has previously been spearheading with Spain – would be helpful as it would emphasize the Syrian government’s continued use of such weapons, in clear violation of international law.

“In Syria, what is the objective? First, to strike Daesh,” Fabius told French lawmakers, using the Arabic acronym of the militant group, when asked what France was doing in Syria.

“Secondly, obtain the end of the dynamite bombardments by Bashar al-Assad of the civilian population and a resolution will be put forward in this sense. Thirdly, there isn’t just military action, but obviously political action to plead and act for a political transition,” he said, describing Assad as the “executioner” of the Syrian people.

A French official confirmed that talks were taking place with Britain and the United States over the possibility of putting forward an alternative U.N. Security Council to the Russian one. France shows Obama how to lead.

Moscow circulated a draft resolution to the 15-member Security Council on Sept. 30 that would urge states involved in military efforts against Islamic State and other militants to coordinate with the countries where they are operating.

With Moscow now conducting air strikes in Syria, including against Western-backed rebels, and urging cooperation in military activities with Assad’s government, the prospects for the Russian resolution to succeed also appear dim.

Western and Arab states as well as human rights groups have repeatedly accused Assad’s forces of using barrel bombs – steel drums full of shrapnel and explosives dropped from the air.

Since barrel bombs are considered to be an indiscriminate weapon, their use in civilian areas is already banned under international conventions.

But the chances of a specific resolution that would target Assad clearing the Security Council are very slim.

Russia and China have already used their veto four times to block Security Council action in Syria, including one that would have referred the Syria conflict to the International Criminal Court for possible crimes against humanity.