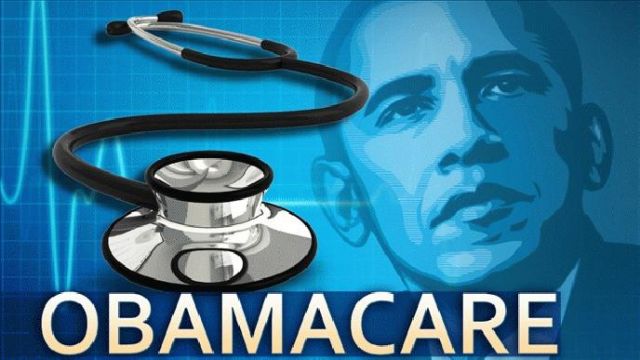 Scott Wilson’s article here at the Washington Post on the long term consequences for Obama’s second term agenda of the “loss of trust” in Obama related to the healthcare roll out  reminded me of an exchange of tweets I had in early September with Larry Sabato about the lasting relevance of Obama’s ongoing image problems related to Syria. An argument was floating around that by drawing a red line over chemical weapons and then not following through, Obama was fatally damaging his standing with the public in a way that would cause irreparable harm to his second term agenda.  I took the contrarian viewpoint that any impact for Syria-related events on U.S. public opinion towards Obama was going to be fleeting, and as suggestive “evidence” tweeted a comparison of Google Searches in the United States for “Syria” and “Miley Cyrus” at the height of the crisis.  Here’s an updated version of that comparison: 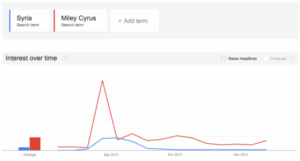 The patterns are clear.  Even at the height of the Syrian crisis (with one very brief exception), Americans were much more likely to go to Google to find information about pop star Miley Cyrus and her latest antics than they were about Syria.  Since the crisis died down, however, it is not even comparable.  Interest in Syria has gone to almost 0 in the Google trends scale (which measures searches on the term in question relative to all searches) while Miley has remained a topic of interest.

Now as commenters on a related Monkey Cage post at the time pointed out, Google trends data are of course not a perfect measure of U.S. public opinion. But we can find evidence of this relative disengagement from the Syrian issue in other metrics as well. Our Social Media and Political Participation (SMaPP) lab at NYU has been collecting tweets on a variety of search terms related to Syria. Here’s a timeline of the number of tweets per day we’ve collected in English mentioning any of our Syria-related search terms.  (So note that this is not limited to the U.S., as the Google Trends data was.  For more on tweets on Syria across all languages, see this excellent blog post by SMaPP lab graduate student Pablo Barberá here):

Again, the patterns are unmistakably clear: once the crisis subsided, so too did mass attention to Syria in English language tweets.

I raise this point for two reasons. First, I think it illustrates the tension between the propensity of the 24 hours media to want to attribute lasting importance to the current issue of the day and the fact that most Americans do not have a tremendous amount of time to think about politics, and therefore are most likely to be paying attention only to the most salient political issues currently being discussed by elites, as John Zaller pointed out in his classic book The Nature and Origins of Mass Opinion. To return to Google trends, here is some more comparative data:

To the extent that Google searches are a reasonable proxy for public interest, what we find, not surprisingly, is that Syria was supplanted in the public interest by – among other things – the government shutdown and issues related to healthcare. (Although I was surprised not to see as much of a spike related to Obamacare. I ran the same search using “healthcare.gov” and basically got a flat line, which does raise the question of whether the public finds the health-care rollout less captivating than even the Syria crisis.) This is consistent with the idea of a short attention span to political issues, and that this short attention span is exacerbated by issues related to foreign policy, especially “non-event” issues like the decision not to bomb Syria.

However, the second reason I wanted to raise this point now is because of Obama’s dropping approval numbers.

What do we see?  Yes, Obama’s job approval have declined and his disapproval ratings have gone up since the Syria crisis at the end of the summer.  So is it possible that the conventional wisdom that Obama could not recover from Syria is correct?  Of course it is, and there is nothing in this figure that would contradict the claim that Obama “can’t recover” from events in early September 2013. However, two other patterns are undeniable.  First, the drop in presidential approval has been going on fairly consistently since the start of 2013.  There are fluctuations in late August/early September, but these are clearly not sharp turning points in the public opinion time series.  Second, the real gap between Obama’s job approval and disapproval opens up in October, not September.  So could Syria has set the stage for people to be less trusting of Obama when the next issue unfolded?  Perhaps, although Obama’s approval after the end of the government shutdown had rebounded to approximately the same levels as earlier in the summer.  But did the Syria crisis leave a dramatic or lasting impact on Obama’s approval rating that would have been visible now had the problems with the health-care roll out not occurred?  It would be hard to conclude that from these data.

Kind of makes you wonder just how “lasting” the damage from the health-care rollout is going to be by the time we hit the next big thing a few months from now.