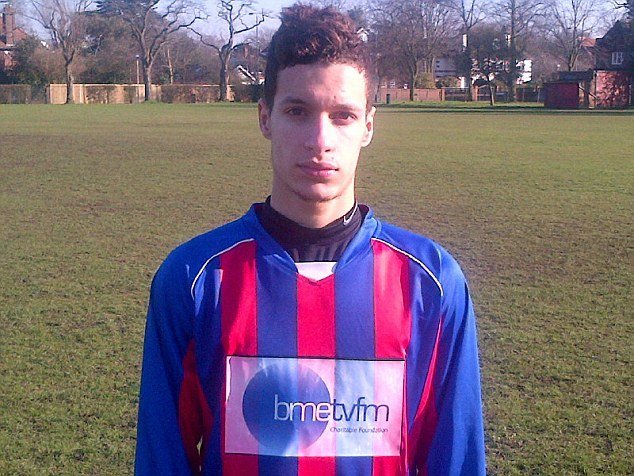 By JACK CRONE FOR MAILONLINE

The group of militants all moved from their native Portugal to London, where they converted to Islam before adopting extremist views and travelling to Syria to join the terrorist network’s ranks.

The men, who lived in Leyton and Walthamstow, have long been on the radar of intelligence officials – who believe the group plays a vital role in the production and dissemination of the sick beheading videos featuring Jihadi John.

In July 2014 – 39 days before James Foley became the first Western hostage to be murdered – one of the east London cell’s ringleaders posted a message on Twitter indicating he had advance knowledge of the American journalist’s grisly fate.

Nero Saraiva, who lived in a one-bedroom council flat in Walthamstow for three years, tweeted: ‘Message to America, the Islamic State is making a new movie. Thank u for the actors.’

Just over a month later James Foley was beheaded in a YouTube video entitled A Message To America.

European security officials now believe Saraiva and his East London cell are responsible for the filming and dissemination of the series of sickening beheading videos, including the execution of British hostages Alan Henning and David Haines.

Experts hope the group’s link to Jihadi John, who speaks with a London accent, will help them build a background profile of the ISIS executioner and his networks – and aid in any mission to capture or kill him, the Sunday Times reports.

MI5 are said to have worked out the identity of Jihadi John but have not yet released his name.

In his most recent video, broadcast lat week, the killer threatened to murder two Japanese hostages unless a ransom of $200million was paid.

Yesterday, new footage appeared to show that one of the captives has been killed.

All five of the football-playing jihadists showed a passion for football in their younger years, and after moving to the UK, would often meet in a Portuguese-run cafe in east London to watch matches.

It is still unclear how they were radicalised in Britain but the borough of Waltham Forest where they lived is known to be home to a number of Islamic extremists.

Also among the five, who all moved to London over the space of several years to study or find work, is Fabio Pocas, the youngest member of the group at 22.

Pocas moved from Lisbon to London in 2012 in his bid to become a professional footballer.

He had previously played at the youth academy of Sporting Lisbon – a club which has bred a host of world stars including Luis Figo and Cristiano Ronaldo.

After helping the side become champions of their division, he was offered the prospect of a trial with a professional club.

‘In about May 2013 an agent came down and said “Work hard over the summer and I will get you a trial [with a professional club]”.’

But Pocas, who had recently converted to Islam, failed to capitalise on the offer and simply ‘disappeared’ – before later resurfacing in Syria in ISIS propaganda photos.

The talented footballer has since been prolific on social media, posing in online pictures with ISIS flags and guns.

He now goes by the name Abdurahman Al Andalus and lives in a town called Manjib with his Dutch teenage jihadi bride.

In a recent Facebook message, he wrote: ‘Holy war is the only solution for humanity.’

All five of the men had family roots in Portugal’s former African colonies and some were brought up to be Christians.

They travelled to London separately but at one point, a few of them shared a flat in Leyton, according to Expresso newspaper in Lisbon.

Celso Rodrigues da Costa, 28, is believed to have had training sessions with Arsenal – but was not offered a contract by the club.

Last April, he was seen in an ISIS video shot on the banks of the Euphrates in Syria with an AK-47 in hand.

In the clip, he slammed the West and denounced school teachers as ‘drug dealers and paedophiles’.

Celso is thought to have followed his older brother, Edgar, to Syria in 2012.

His 31-year-old sibling, who studied management and accounting in Portugal before emigrating to London, is thought to leading a band of foreign militants in Aleppo.

Both men were enrolled at the University of East London (UEL) in Stratford, but were thrown off their courses after failing to attend lectures.

Ringleader Saraiva, who posted the tweet suggesting advance knowledge of James Foley’s death, was the first of the group to travel to Syria in the summer of 2012.

He has a five-year-old son in the UK, who he has never supported financially, and is thought to have lived in Britain the longest, having appeared on the electoral role in 2003.

He is a known supporter of hate-preaching cleric, Abu Hamza, recently jailed for life in America for terrorism offences.

The fifth member of the cell, a 26-year-old former Catholic known as Sandro, was the last to travel to Syria and was reportedly killed last October in a coalition airstrike.