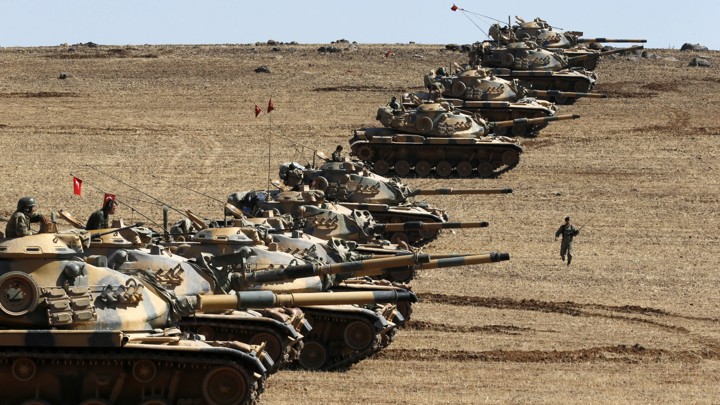 In a dramatic change of policy, the United States abandoned the Kurds and U.S. President Donald Trump, after a call with his counterpart Turkish President Tayyip Erdogan, gave the green light for Turkey to establish its own safe zone in Syria. After years of seeking refuge from the Assad terror, finally Syrians have a safe zone Assad cannot touch.

Republicans and Democrats have warned that allowing the Turkish attack could lead to a massacre of the Kurds. Both said it would send a troubling message to American allies across the globe.

The decision is a stark illustration of Trump’s focus on ending American overseas entanglements. But his goal of swift withdrawals in Syria, Iraq and Afghanistan have been stymied by concerns from U.S. officials and American allies about the dangerous voids that would remain. As he faces an impeachment inquiry at home, Trump has grown more mindful about making good on his political pledges; even at the risk of sending a troubling signal to American allies abroad.

The Turkish presidency said after the call that Erdogan and Trump had agreed to meet in Washington next month, following an invitation by the U.S. president.

The call came a day after Erdogan said a military incursion into northeastern Syria was imminent. On several occasions, Ankara accused Washington of stalling efforts to establish the “safe zone”.

During the phone call, Erdogan expressed his frustration with the failure of U.S. military and security officials to implement the agreement between the two countries, the Turkish presidency said.

Erdogan also reiterated the necessity of the safe zone to eliminate the threats from the Syrian Kurdish YPG militia, which Ankara considers a terrorist organization, and to create the conditions necessary for the return of Syrian refugees, it said.

The White House Press Secretary said in a statement:

Turkey will soon be moving forward with its long-planned operation into Northern Syria. The United States Armed Forces will not support or be involved in the operation, and United States forces, having defeated the ISIS territorial “Caliphate,” will no longer be in the immediate area.

The statement from the White House also said:

Turkey will now be responsible for all ISIS fighters in the area captured over the past two years.

In the past, European nations ISIS fighters came from refused U.S. requests to take them back.

The NATO allies agreed in August to establish a zone in northeast Syria along the border with Turkey. Ankara says it will clear the zone from any YPG fighters.

Turkey says it wants to settle up to 2 million Syrian refugees in the zone. It currently hosts 3.6 million Syrians sheltering from Syria’s more than eight-year conflict. It remains unclear who will foot the cost of resettlement, which could run in the billions.

Turkey says the United States, which supports the Syrian Democratic Forces (SDF), a YPG-led force that defeated Islamic State fighters in Syria, is moving too slowly to set up the zone. It has repeatedly warned of launching an offensive on its own into northeast Syria.

The two countries are also at odds over how far the zone should extend into Syria; as well as who should control it. Turkey says it should be 30 km (19 miles) deep. As of this phone call between Trump and Erdogan, Turkey will have total control over the safe zone.

Turkey’s purchase of Russian S-400 defense missiles has created tensions between the U.S. and Turkey.