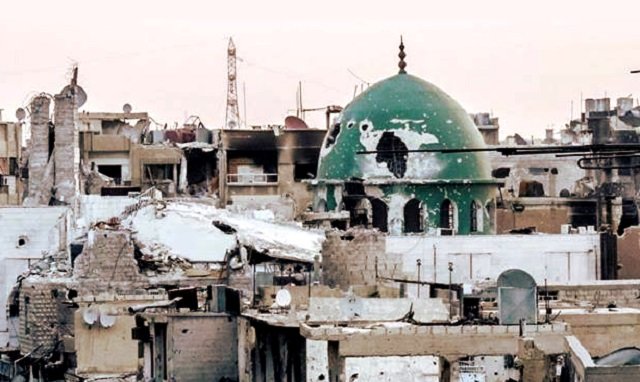 July 14, 2013 7:29 am 0
One Reason We Can’t Win Our Freedom
So much for Kerry’s agreement to strip Assad of Chemical Weapons
Assad Men Torture Women by Inserting Live Rats in Their Vagina

Government troops fired tank shells and artillery in heavy clashes between Syrian forces and rebels Sunday on the edge of Damascus, where the military has been pushing its offensive to retake key districts that have been in opposition hands for months. Fighting traps 200 civilians inside Mosque In Qaboun.

The Syrian army has seized the momentum in the civil war over the past three months, wresting back territory lost to rebel forces and solidifying its hold over contested areas, particularly on the fringes of Damascus. Two of the embattled districts are Jobar and Qaboun, from which rebels frequently launch mortar rounds on the heart of the capital.

A Syrian military commander said forces loyal to the psychopath Baschar al-Assad have recaptured 60 percent of Jobar, south of Qaboun, and were trying to retake the rest. The commander talked to reporters Sunday during a military escorted tour of Jobar organized by the Information Ministry. His claim could not be independently verified.

An Associated Press reporter on the tour saw widespread destruction that pointed to heavy fighting in the neighborhood. Marble tile factories were destroyed. Reporters made their way in the devastated area by climbing through holes knocked in walls because of warnings of rebel snipers in the area.

At least two bodies, apparently those of rebel gunmen, lay on the floor of a bunker described by the official as a “terrorist” hideout.

Jobar is near the road linking Damascus with its eastern suburbs known as Eastern Ghouta. Rebels have been using the road to transport weapons and other supplies to the capital, the seat of Assad’s power.

During the tour of Jobar, reporters were taken to a hideout the army said it seized a day earlier after killing 30 rebels and their leader there. Reporters were shown RPG mortar rounds and explosive devices, as well as an alleged chemical material with a strong odor.

Arabic graffiti on the walls read: “The al-Tawhid Brigade,” and “the Islamic State of Iraq and the Levant” – names of militant groups fighting to topple Assad.

Sunday’s tour came as Syria’s main Western-backed opposition group claimed that fighting traps 200 civilians inside mosque in Qaboun as fighting raged outside between rebels and Assad’s army. It warned that thousands of civilians in Qaboun could be “massacred” by Assad’s army as armored vehicles and elite forces move in.

Later Sunday, a powerful bomb explosion rocked the Deir Atiyeh town north of Damascus, killing and wounding a number of people, activists said. The bomb went off near a police station in a densely populated area, but most of the casualties were civilians, according to the Military Council for Damascus and its Suburbs, a rebel group.

In Washington, U.S. officials said Israel targeted advanced anti-ship cruise missiles near Syria’s principal port city in an airstrike earlier this month, according to a report by The New York Times. It cited the officials as saying the attack on July 5 near Latakia targeted advanced Russian-made Yakhont missiles that Russia sold to Syria.

There was no immediate comment from Assad’s government, whose key political ally and arms supplier is Russia.

Asked about the reports on the CBS-TV show “Face the Nation,” Israeli Prime Minister Benjamin Netanyahu refused to confirm or deny Israeli involvement.

He insisted that he will not allow “dangerous weapons” to reach Lebanon’s Hezbollah militants.