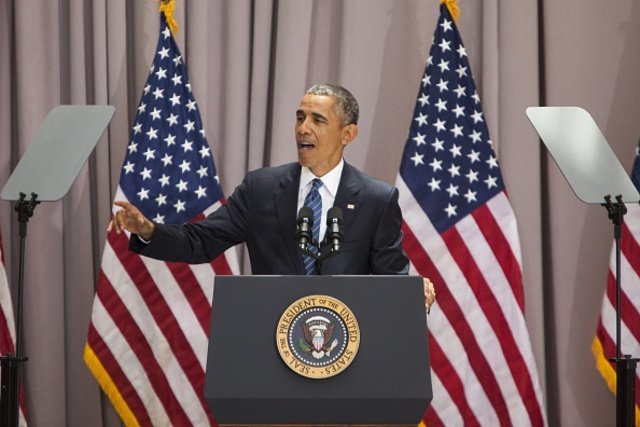 Fight Back Obama On His War-mongering Accusation

Two weeks ago, President Barack Obama cited a controversial and illogical argument with regard to his Iran deal that did not sit well with many. The Washington Post explained it in these two opening paragraphs:

President Obama’s defense of the complex and painstakingly negotiated nuclear deal that his administration reached with Iran boiled down to a simple, if controversial, contention: The only real alternative to the deal was war.

Obama returned to that conclusion repeatedly Wednesday at a news conference that stretched for more than one hour.

That was the left jab. Now comes the right hook.

During his speech on August 5 to a crowd of supporters at the American University, Obama began a new campaign of attributing opponents of his Iran deal to Iraq war-mongering. He said:

“Many of the same people who argued for the war in Iraq are now making the case against the Iran nuclear deal.”

For those who are able to connect dots easily, what Obama is saying, between the two positions, is this: My opponents want to start a war and if it was not for my Iran deal, we would go into another Iraq-like war by the same pro-Bush crowd.

No one, here at TFS, that we know of has said that war is the alternative. No one has even come close to discussing a military conflict with Iran as the solution to Iranian terror. In fact, prime minister Benjamin Netanyahu, the most vocal and ardent opponent of Obama’s Iran deal, during his address to Congress, said:

“The alternative to this bad deal is a much better deal.”

Obama is falling back to his old bad habits of blaming Bush for his own shortcomings. And as we fought him back on his “Blame Bush” deliberate campaigns, we should fight back Obama as hard on his new deceptive campaign leading the American people, who oppose his deal 2 to 1, to believe that it is either his deal or the Bushites lurking in the dark who will take us to another Iraq war again.

America has never experienced a dirtier politician than Barack Obama. He is the product of Chicago known for grooming the worst of the worst. We should fight back Obama on his claim that the alternative to his bad Iran deal is war before he makes it stick even though many in the know are mocking his assertions.

Obama’s desperation is clear. He will say anything to ram down our throats a bad Iranian deal that would jeopardize the safety of this great nation and our allies overseas.

Fight Back Obama On His War-mongering Accusation