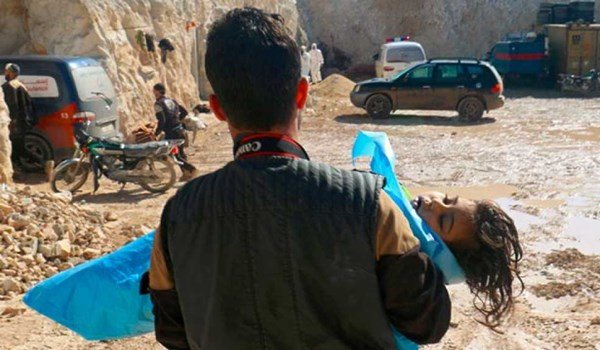 November 26, 2018 9:10 am 0
Topple Assad to Quiet the Middle East
US Strikes Assad Forces, Israel His Factories
The Coronavirus May Have Saved More Syrian Lives

Falafel read in an AP story that Ambassador Fernando Arias, director-general of the Organization for the Prohibition of Chemical Weapons, was mulling over sending his inspectors to Aleppo to investigate the latest Chemical Assad attack, he figured there was a story to be told here. Using his iPhone, Falafel interviews OPCW Arias.

Falafel: Ambassador Arias, thank you for taking my call.

Arias: To talk to the great Falafel is an honor.

Falafel: As you know, two days ago Chemical Assad gassed Syrian civilians in Aleppo as an excuse to bomb the civilian population in Idlib into submission. The people of Aleppo already submitted to him, yet he uses them as bait to hurl deadly barrel bombs on the last bastion of the Syrian Revolution. Why are you “mulling” investigating the matter?

Arias: Well, we are not a political organization. Who did to whom is of no concern to us.

Falafel: There is a logic involved here, which begs the question: What prompted Chemical Assad to gas the people of Aleppo? People who are not fighting him?

Arias: Again, this does not concern us. We just look for the culprit without infusing the logic of “Who bombed the Russian Buinaksk and Volgodonsk apartments in Moscow in 1999?”

Falafel: Funny that you mention Buinaksk and Volgodonsk apartments Putin is accused of bombing. History repeats itself here. Let me ask you Mr. Arias, why are you “mulling”?

Arias: “mulling” is used loosely here. I could have used “considering”, but it would sound so mundane. “mulling” has power to it.

Falafel: Is it because you need a nod from the Trump to proceed?

Arias: Not at all. However, talking to partner countries legitimizes our effort. The last OPCW needs is to begin an investigation only to read in the newspapers that countries like the United States, the UK, or France stand against.

Falafel: Thank you for your honesty.  Have you heard from the west?

Arias: It could be that Chemical Assad got there before us.

Arias: He got the green light from Jared Kushner in return for some concession.

Falafel: You are wrong there. Kushner is an honorable man and he would never trade lives for money.

Arias: Until the West gives us a green light, we are “mulling”.

Kushner? No way. What could Chemical Assad concede in return? Quiet borders with Israel? They have been under the Assad regime for a long time. Maybe, pinpointing the way Iran delivers weapons to Hezbollah? This is important, but Kushner would never trade lives for information.

We will know soon if “mulling” turns into a “full investigation”, or into oblivion.