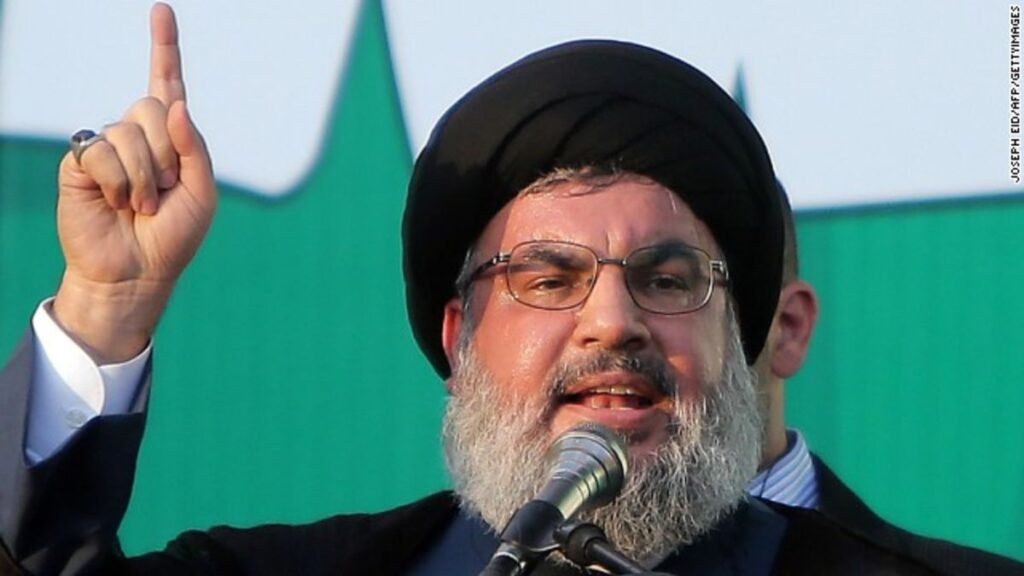 Falafel has been trying to book an interview with the grand Sayyed of all Lebanon and its master par excellence Hassan Nasrallah for as long as he remembers. The head of the terror organization Hezbollah has shunned him from the start. Later, unknown to him, Falafel hears Soleimani order Nasrallah to act.

But suddenly, and because of all the troubles he faces in Lebanon, Nasrallah decided to grant Falafel his interview.

Falafel arrived to the Dahyieh area in south Beirut where Nasrallah’s bodyguards blindfolded him and took him in a black sedan for quite a distance. Finally, they stooped. Took him down an elevator. and then ushered him into a luxurious bunker Hitler would have envied Nasrallah for its size and elegance. Nearby, Falafel could hear a bunch of kids playing and Arabic music blaring from another far corner of the bunker.

Falafel entered a large room where Hassan Nasrallah was squatting on a carpet with tea boiling in a small gas kettle sitting next to him. Behind him is an enormous picture of Ayatollah Khamenei. All around are pictures of Nasrallah with Iranbian leaders and dignitaries. Not one picture of Michel Aoun, the president of Lebanon.

Falafel: Thank you for seeing me Sayyed Hassan.

Without saying a word, Nasrallah point to Falafel to squat in front of him.

After a long pause, Nasrallah speaks:

Nasrallah: A strong and free country able to defend itself from the colonialists and the land thieves.

Falafel: I presume you mean Israel when you say “land thieves”. But the Jews lived in these lands long before the Palestinians.

Nasrallah: I did not ask you to come hear to give me a lesson in history. Ask your questions.

Falafel: Fair enough. Why not let the Lebanese get their wish by forming a government of technocrats, not political hacks?

Nasrallah: Because the Lebanese don’t know anything about anything. We are here to educate them.

Suddenly, someone walks into the room holding a cordless red phone.

Nasrallah takes it. Starts talking in Farsi to the person on the other line. Not realizing Falafel understood the language.

Here is a brief of what Nasrallah said.

Nasrallah: We are ready but we prefer to wait a bit more.

Nasrallah: Yes general. I will immediately let our men loose. It should take us about a week to control all the institutions and establish a curfew.

Nasrallah: We will kill whomever we have to kill, just as you wish.

Nasrallah: OK, I will suspend the Parliament too.

Nasrallah: The same method we used against his father?

Nasrallah: Will do. Can Assad help by sending some of his experienced prison guards? We may need to torture the Sunni and Maronite activists for information.

Nasrallah: Within a week. That’s a promise. Shall we fear American retaliation?

Nasrallah: I agree. Trump barks but does not bite.

Nasrallah: You can count on me. Lebanon will be under your control in one week.

Nasrallah hangs up, then turns to Falafel.

Nasrallah: Where were we?

There you have it folks! Hezbollah destroyed Lebanon’s economy to be able to fully control it and turn it into a small dictatorship. Just like Syria and Iran.