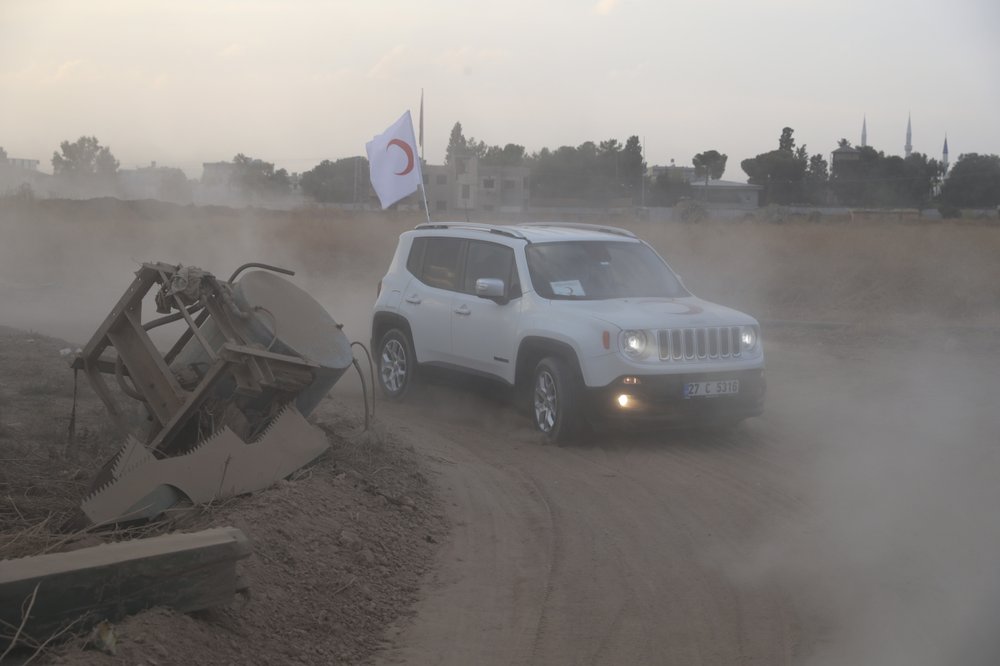 October 20, 2019 7:34 am 0
Trump Keeps Half Pregnant Presence in Syria
NATO Members Clash Over The Syrian Kurds
Syrian Oil Fields are off Limits to the Trifecta Terrorists

Turkish President Recep Tayyip Erdogan wants Syrian forces to retreat from areas near the Turkish border so he can resettle up to 2 million refugees there, his spokesman told The Associated Press on Saturday. The request will top Erdogan’s talks next week with Syria’s ally, Russian President Vladimir Putin.

Arrangements along the Syrian-Turkish border were thrown into disarray after the U.S. pulled its troops out. It opened the door to Turkey’s incursion to drive out Kurdish-led fighters it considers terrorists.

The Kurds, which the U.S. abandoned, invited Damascus to send troops into northeastern Syria as protection from Turkish forces. That has complicated Turkey’s plan to create a “safe zone” along the border, where it can resettle Syrian refugees now in Turkey. Most of those refugees fled Syria’s government.

A REQUEST TO SECURE SAFETY OF REFUGEES

Erdogan’s spokesman, Ibrahim Kalin said Ankara does not want either Syrian forces nor Kurdish fighters in the border area because refugees would not go back to areas under their control.

Turkey has said it wants to oversee that area.

This is one of the topics that we will discuss with the Russians, because, again, we are not going to force any refugees to go to anywhere they don’t want to go. We want to create conditions that will be suitable for them to return where they will feel safe.

The Assad regime tortures and kills any Syrian cooperating with its enemies. Assad considers Erdogan a dangerous foe.

Turkey has allowed some 3.6 million Syrians fleeing the conflict in their homeland. Because of domestic tensions against the refugees, Turkey wants most of them to return. So far, very few have returned to an enclave Turkey already took over and has controlled since 2017. The refugees fear Assad tentacles of terror will reach them.

Under an agreement made by the U.S. and Turkey Thursday, a five-day cease-fire has been in place. Turkey expects the Kurdish fighters to pull back from a border area.

A senior Syrian Kurdish official acknowledged for the first time that the Kurdish-led forces agreed to the pull-back. He stated that his forces will move 30-kilometer (19 miles) south of the border.

Redur Khalil, a senior Syrian Democratic Forces official, told the AP that the withdrawal will take place once Turkey allows the Kurdish-led force to evacuate its fighters and civilians from Ras al-Ayn, a border town under siege by Turkish-backed forces. He said that Kurdish-led force was preparing plans to conduct that evacuation on Sunday, if there are no further delays.

Khalil said Kurdish-led fighters would pull back from a 120-kilometer (75-mile) stretch along the border from Ras al-Ayn to Tal Abyad, moving past the international highway.

We are only committed to the U.S. version not the Turkish one.

A previous agreement between the U.S. and Turkey over a “safe zone” along the Syria-Turkish border floundered over the diverging definitions of the area.

Erdogan has said the Kurdish fighters must withdraw from a far larger length of the border from the Euphrates River to the Iraqi border — more than 440 kilometers (260 miles) — or else the Turkish offensive will resume on Tuesday.

But U.S. officials say the agreement pertains to the smaller section between the two towns. Kalin confirmed that is the area the pause in fighting is affecting, but said Turkey still wants the larger zone.

Two days into the cease-fire, the border town of Ras al-Ayn has been the sticking point in moving forward.

We hope that as of tonight or tomorrow, they will stick to this agreement and leave the area.

A partial evacuation took place Saturday. Medical convoys were let into part of the town still in Kurdish hands, evacuating 30 wounded and four bodies from a hospital. Khalil said the plan to complete the evacuation from Ras al-Ayn is now set for Sunday.

Turkish officials denied violating the cease-fire or impeding the fighters’ withdrawal. They instead blamed the continued violence on the Kurds.

If Kurdish fighters then pull back from the 120-kilometers (75 miles) border area, it is uncertain what the arrangement would be along the rest of the northeastern border, most of which remains solely in the hands of Kurdish-led fighters.

Last week, Syrian forces began deploying into Kurdish areas, moving only into one location directly on the border, the town of Kobani, and a few positions further south.

Khalil said the Syrian government and its ally Russia did not want to deploy more extensively in the area. To avoid apparently frictions with Turkey.

We noticed there was no desire (from the Russians and Syria) to have the Syrian military on the dividing line between us and the Turks except in Kobani.

The border town of Kobani also stands between Turkish-controlled Syrian territories to the west and Kurdish-held eastern Syria.

Khalil said it was not clear what would happen after his forces’ withdrawal and five-day cease-fire ends.

“The deal essentially is handing Syrian land to a foreign country. This is not good. It is bad for us,” he said. “We have nothing to win. The only win is the international sympathy.”

ISIS occupied the lands across the border from Turkey, which the Kurdish took over. Originally, the lands were home to the 2 million Syrian refugees Turkey is settling.