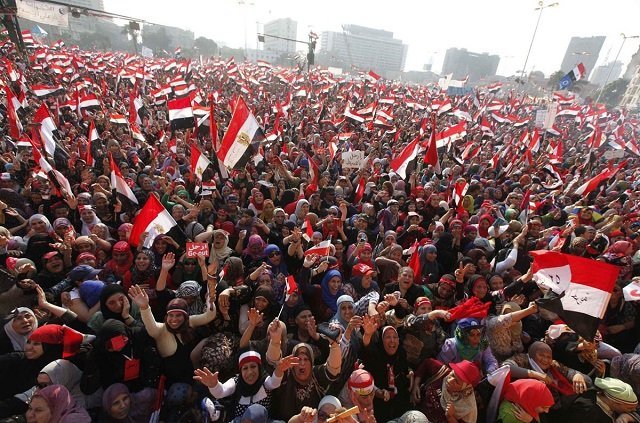 What can Syrians supporting the barbarism of Assad claim after watching the Egyptians reject Islamism through peaceful means? Egypt strips Assad supporters of ALL excuses.

That they were wrong in following Assad to the abyss or that Assad has been and will always be the problem in Syria? Not only Assad has manipulated their fears for his own self-interests, but also he increased by tenfold the Jihadist problem in Syria while destroying the well-balanced fabric of the country we all called home.

In Egypt, an army respects the will of the people by showing wisdom and balance; in Syria, the Assad regime butchers the Syrian people and deceives the minorities into believing their salvation rests on his extreme violence.

Salute the Egyptian people and the Egyptian army that stood by them in support of their aspirations for a free society.

Salute the Copts of Egypt who refused to submit to Islamism and found the will to change history to accommodate their desire for a free society.

We sold the Arab Spring short because of our own fears of Islamism, but the people of Egypt turned out to know more than any short-sellers.

We permitted Assad to destroy a country out of our fear of Islamism when we could have saved a country from the sectarian war burning all its moderates.

Time to recognize how wrong we are into believing Islamism is invincible or that the Arab countries, with a vibrant minority, will simply bend to its will.

Egypt, before us, strips Assad supporters of all excuses and shows how gullible and weak they have been.

History will not judge the minorities of Syria kindly for standing by the violence of Assad against their own people when they could have abandoned him to support the rule of law and a free Syria able to write history on clean parchments instead of the blood soaking canvas Assad painted for us.

Recognize that Assad is the problem in order for all of us to find a way to save Syria together, shoulder-to-shoulder.