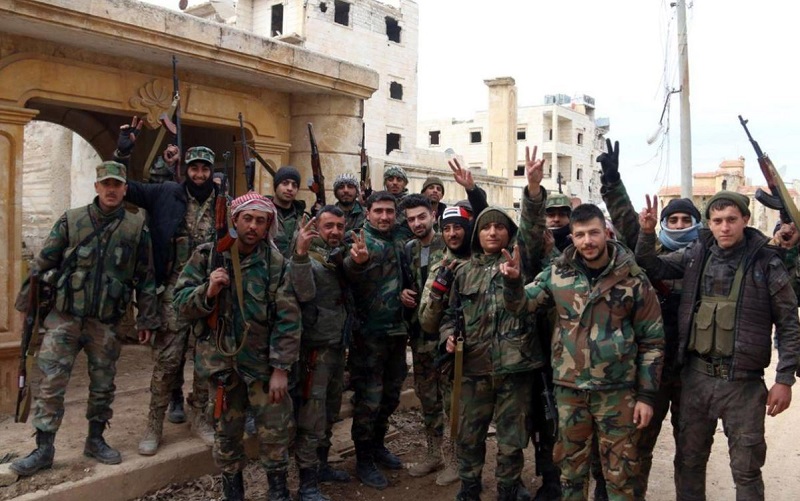 Does Anyone Really Believe Assad Has Won in Syria?

Does anyone really believe Assad has won in Syria? On the surface, Assad controls more land and more people. But he also controls more ruins and more economic problems. Ruins he cannot undo. Quite irreversible unless Putin and Khamenei can pay to rebuild Syria from their own personal fat bank account.

Not to speak of more enemies and much more violence to come his way in the form of hit-and-run guerilla warfare.

DOES ANYONE REALLY BELIEVE ASSAD HAS WON IN SYRIA?

Think about it. If Assad wins, so do Russia and Iran.

Who, here, thinks the United States of America is going to sit idly while Assad licks his chops? Who, here, believes Israel is going to sit idly by while Iran spreads its diabolical hegemony whose aim is to kill and maim the Jews? Further, who, reading this, believes Turkey and Qatar are just going to whistle to the wind by letting Iran slowly destroy the Muslim Brotherhood across Syria?

Not convinced? Do you think Saudi Arabia is just going to let Iran spread its wings with ease in Syria just so it can cause more problems for the kingdom in Yemen? King Salman will try and cause as much havoc for Iran in Syria as it causes him on his southern borders.

So, go ahead Mr. psychotic Assad. Claim your victory and then sit back and watch Syria enter a new phase that no army can win over. A phase where bloodshed and brutality become a routine of daily life while you proclaim Syria is peaceful and under your tight controls. If little Lebanon suffered from a 17-year old civil war, how long do you think Syria’s civil war is going to last?

We know how long. Until your last breath.

Both the United States and Israel are waiting for Assad to mop up the extreme AQ-type Islamists before they react. He is doing them both a favor. But once he is done, it will be, you know, the Saddam treatment.

You don’t remember the Saddam treatment? Let us refresh your memory.

Saddam initiated, on the behest of solid U.S. encouragement, his war against Iran in 1980 hoping to annex Kuwait to Iraq. After an eight-year brutal and heinous war, Saddam came calling for his prize. Instead, General Norman Schwarzkopf army descended upon him to clip his wings and shut his mouth.

Mind you, Russia and our U.S. Congress may not allow another Schwarzkopf to descend upon Assad, but Putin would be helpless when the United States slaps similar sanctions on Assad it has slapped on Iran once he annihilate the extremists. With a little bit of salt and pepper on the side in the form of Suxtnet version 2.0 just to make sure Syria remains perpetually stuck in the medieval age.

Now, let us ask you again: Who, here, thinks Assad has won his war in Syria?

Those of you, Assad supporters, reading this article, we say you’re welcome. For what? For the “thank you” we read on your lips. What “Thank you”, you ask? For opening your eyes to the reality of Syria and the Assad short lifeline.

So, go ahead and celebrate for a moment. Open your champagne bottles and let your goblets and chalices bounce off each other with joy. When reality hits you that Assad has really lost all of Syria, you will ponder over your slogan of “Assad or we burn the country” with your eyes closed.

And then you will ask yourselves the immortal question: Was it all worth it to destroy a whole country for one man?

Does Anyone Really Believe Assad Has Won in Syria?