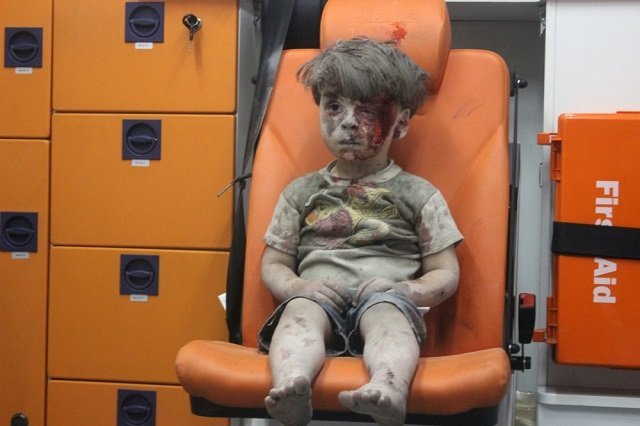 Stop Blaming Trump For The Disaster Obama Made Of Syria

August 20, 2016 5:58 am 0
An Opportunity for Israel to Finish Hezbollah Off
Obama, Kerry surrender Syria and the Middle East to Iran
Israeli Airstrike on Hezbollah in Eastern Syria

Source: The Federalist – by Tom Nichols (Stop Blaming Trump For The Disaster Obama Made Of Syria)

There is only one American who must bear the moral stain of allowing Syria to become an abattoir, and that is the current president of the United States, Barack Obama.

And now, a word—if only one—in defense of Donald Trump.

No, I haven’t changed my mind, and yes, I still think he’s the most odious major-party candidate in the history of the republic. He’s responsible for many things, including his own unique soiling of our political culture and constant efforts to make a mockery of the constitutional traditions of our national elections.

One thing for which Trump is not responsible, however, is the disaster in Syria. There is only one American who must bear the moral stain of allowing Syria to become an abattoir, and that is the current president of the United States, Barack Obama.

This should be obvious, but apparently, the new fashion is to consign the president’s role in creating this disaster to the memory hole, and instead to see if enough blamestorming can make Syria stick to Trump instead.

This Isn’t Trump’s Mess (Yet)

On Thursday, for example, a reporter for a Dutch newspaper tweeted out the now-viral video of a young Syrian boy in Aleppo who survived an air strike. It’s a heartbreaking image of a child in a war zone, stunned and covered in debris. The reporter added a caption he attributed to Trump: “I will look Syrian kids in the face and say go home.” (Trump actually said: “I can look in their face and tell them they can’t come here.”)

The same day, CNN published an article by Syrian human rights advocate Roaa Hasan, who said: “Trump’s take on Syria’s opposition — and on [Syrian President Bashar Assad]– have shocked many activists and shattered their hopes of finding a friendlier American president who might have been more helpful to the rebel cause.” Hasan mildly chides Hillary Clinton for supporting a no-fly zone that was never implemented, but somehow never mentions President Obama.

Trump’s response to the Syrian nightmare, and especially his utter lack of empathy for the children of Syria, is disgusting. (It is part and parcel of his general lack of empathy about everyone not named “Trump.”) But the bloodletting is not his fault. Invoking Trump’s heartlessness and stupidity is not a substitute for holding responsible the people who allowed Syria to descend into hell.

American inaction on Syria was the coagulated result of several factors, including President Obama’s simplistic beliefs about Middle Eastern affairs, the callous political calculations of his White House staff, the administration’s lumbering and poorly managed interagency process, and the institutional weakness of Secretary of State John Kerry. The few advocates within the administration for a response against Assad were outflanked. (Clinton claims she pressed earlier for a different policy, but if that is true, it only confirms what an ineffectual secretary of State she truly was.)

In the wake of all of this fecklessness, the Syrian people have been consigned to slaughter. Today, Assad acts with impunity while Russian jets fly missions out of Iran, a result of the administration’s shocking abdication of a cornerstone of U.S. foreign policy—that is, to limit Russian power in the region—since the end of World War II. This was an outcome many of us saw coming years ago and said so at the time with great alarm.

It’s Obama’s Fault We Have a Global Disaster

Rather than blame Obama, however, the game now is to point to Trump, as though he is somehow responsible for this mess and has a positive obligation to do something about it. He doesn’t.

None of this excuses Trump for responding to questions about the crisis with answers that are both cruel and stupid. Refugee applications, as independent candidate Evan McMullin (himself a former CIA officer) has pointed out, are unlikely to be rife with terrorists. Trump’s comments about “extreme vetting” are inane and his insistence that “no one knows what’s going on” is pure projection from a man who never has any idea what’s going on anywhere. Trump has no policy for dealing with Syria beyond “getting smart” and “getting tough” and all his other empty verbal tics.

But there is a grain of truth in Trump’s stubborn refusal to react to the destruction in Syria, in that he is not obligated to panic over a situation he did not create. The situation is now horrifically out of control, and it is not up to Trump or any Republican to propose a remedy acceptable to the liberals and human rights activists who have steadfastly supported the president who created this disaster in the first place.

There’s also the irony, of course, that the same liberals who still insist that no human being could solve the problems George Bush created in Iraq are now desperate to pin future failures in Syria on both Trump and Clinton before Obama has even left office. No matter who wins, neither Trump nor Clinton deserve to be preemptively castigated for their solutions, whatever they are, to Obama’s monumentally poor decisions on Syria.

Trump’s critics, however, are right about one thing: no matter who created them, Syria’s refugees are now a global problem, and pretending these wounded people do not exist is not an option. Neither, however, is it realistic merely to throw the world’s doors open and try to solve a civil war by resettling the entire population of Syria in Europe and North America. No matter what we do, none of the choices are good.

The only sure outcome after November, unfortunately, is that Syria will continue to burn. Syria’s children will continue to be found in the broken streets of what’s left of Aleppo—and under the rubble of 70 years of American foreign policy in the Middle East brought to ruin by one man, and one man only: Barack Obama.

Stop Blaming Trump For The Disaster Obama Made Of Syria