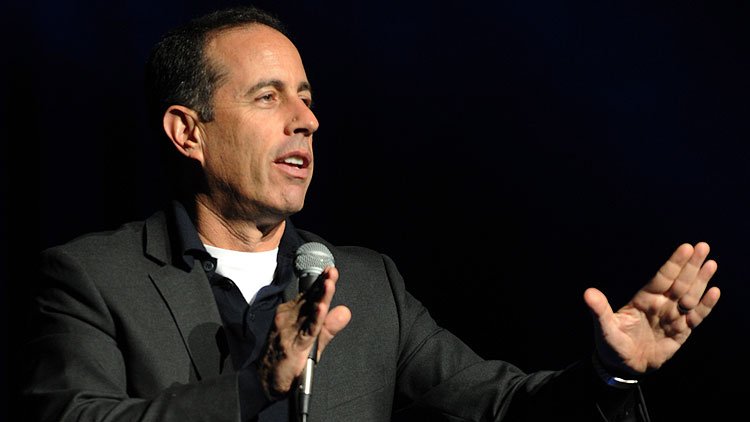 Did You Know Jerry Seinfeld Is of Syrian Descent?

November 20, 2015 7:21 am 0
Syrian regime using chemical weapons in battle for Homs
Is Obama Providing Putin with Intelligence on Syrian Opposition Positions?
Anyone Calling Assad to Stay is Clueless About Syrian Resolve

Incidentally, none of them is a terrorist just in case our popular Congress has new ideas to stem the flow of Syrian refugees trying to find refuge in America.

And all of them contributed immensely to America’s values and traditions.

For example, did you know Jerry Seinfeld is of Syrian descent? Jewish Syrian on his mother’s side? Every Syrian, Jewish or not, should be proud of this fact. Imagine the next Jerry Seinfeld or Steve Jobs Congress just blocked from coming to America.

Here is the full list of famous Americans of Syrian descent with details to their Syrian kinship.

The famous comedian from Massapequa is of Syrian Jewish descent on his mother’s side.

According to an Ellis Island Record obtained by the New York Times in 2009, Selim Hosni – Seinfeld’s maternal grandfather – arrived in 1909 from Aleppo, Syria, aboard the S.S. Hudson with his wife and infant daughter.

One of the founders and the most famous face of Apple, Steve Jobs’ birth father was a Syrian immigrant.

Jobs’ biological parents were Joanne Schieble Simpson and Abdulfattah Jandali. They gave the baby up for adoption at the insistence of Joanne’s father, but later got married and had a girl.

Jobs would meet his mother and biological sister later in life, but never formally met his father, according to the “Steve Jobs” biography by Walter Isaacson.

The biography goes on to tell the story of a Mediterranean restaurant Jandali managed in San Jose where Jobs used to eat.

He was born in Beirut in modern-day Lebanon to Syrian parents from Damascus, according to an article appearing in the New York Times.

According to an article appearing in the English version of Israeli newspaper “Yedioth Ahronoth,” Abdul’s father is Syrian Jewish.

He was born in Aleppo and raised in Brazil.

The actor most famous for winning the Academy Award for best actor for his role as Antonio Salieri in the 1984 film “Amadeus” has a father who emigrated from Syria during the 1920s.

Brandon Saad is a 23-year-old from Pittsburgh, Pa., who plays left wing for the Columbus Blue Jackets and played for the 2013 and 2015 Stanley Cup champion Chicago Blackhawks.

According to his NHL Draft player profile, Saad’s father migrated to the United States from Syria.

In a story published by the United Arab Emirates government-owned newspaper “The National,” Brandon spoke about his father’s relationship with relatives back in Syria.

“They’re back in his hometown – he’s in contact with them all the time, Skyping and talking to them,” Saad said. “We’re trying to get them over here.”

The father of the Canadian singer who became a naturalized citizen of the United States in 1990 immigrated to Canada from Syria.

Al-Hadid is a contemporary artist who is best known for her sculpture work.

She immigrated to Canton, Ohio, from Aleppo with her family when she was five.

So next time someone tells you Syrian refugees are a burden, tell them we are taking back all the laughter Jerry Seinfeld rained on them along with their iPhone they do not deserve.

Did You Know Jerry Seinfeld Is of Syrian Descent?