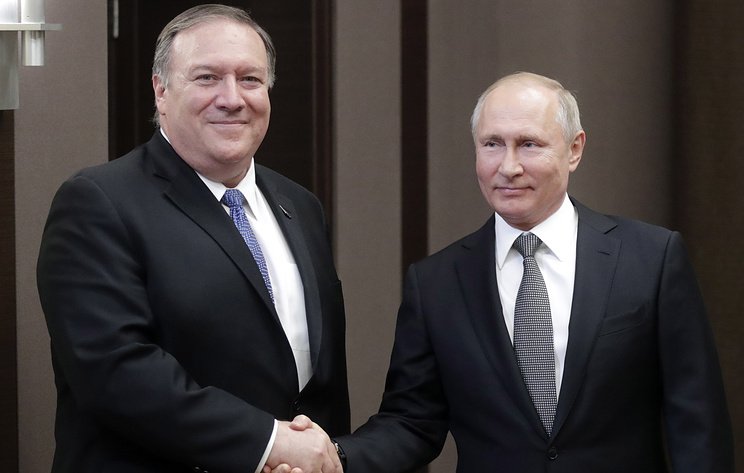 Did Pompeo Capitulate to Russian Demands on Syria?

May 15, 2019 6:16 am 0
Iran Frees US Citizen But Assad Still Detains Austin Tice
Similarities Between Trumpism and Assadism
ISIS Is Done. Khamenei, Putin Under Pressure. Assad Is Ignored

After meeting with Vladimir Putin, Secretary of State Mike Pompeo was in high spirits. In fact, he said he was “very excited” about the prospects. Why is Pompeo very excited about Syria talks with Russia? What could have happened to sow such optimism? Did Pompeo capitulate to Russian demands on Syria?

According to the Washington Examiner, the United States got closer on Syria by sharing common grounds. What those might be? Could they be universal in nature to include Russian sanctions, or are they strictly local or regional?

After all, these are the two boys on the block that matter the most, which includes the new boy in the neighborhood Barack Obama permitted to occupy his place when he vacated the region. Putin bullied Obama, and Obama just yielded to his bullying. Remember those bare-chested images of Putin that made our president shake in his boots? Oh, well, let us not digress.

What did the two boys agree upon? TASS, the Russian news agency, reported that Yury Ushakov, Putin’s aide, said:

In the Syrian context, we discussed the importance of jointly fighting against international terrorism and noted that it is very important to finally launch the Syrian constitutional committee.

Boring, we said. Everyone knew that part. But how, we ask? Ushakov answered:

The only basis for overcoming the conflict is in a peaceful negotiations process under the auspices of the UN with participation of all constructive forces.

THE UNITED NATIONS IS RUSSIA’S EQUALIZER AGAINST AMERICA

Let it be known to all that when Russia mentions the United Nations, it is only because it could use its veto power against America. That is it. It’s Russia’s way of winning. And if Pompeo agreed to this plan, it means he has yielded to Russian demands.

This is reinforced even further when Ushakov used the words “participation of all constructive forces“. Translation? Assad is going nowhere. Pompeo may have just abandoned the notion of regime change in Syria the U.S. was toying with through support for the Syrian Constitutional Committee followed by new elections.

It was enough for the Russians to praise the Syrian Constitutional Committee Russia was not on-board in its direction just one day earlier. According to The Washington Examiner, Ushakov concurred:

Why would Pompeo give-up on Assad? What did he get in return?

IRAN REMOVAL FROM SYRIA IS U.S. ONLY GOAL

We believe Russia, and implicitly Assad, agreed to the removal of Iran from Syria. This is the only thing that matters in Washington today. Since Assad is not party to these negotiations, he could simply point the fingers at the two boys on the block for anti-Iran actions. Will the Iranians by Assad bullshit? Or will they concoct a counter-plan that may include Assad removal on their own for his treachery?

Don’t take out that x factor out of the equation. Iran did not work so hard at spreading its wings while costing it funds and blood to simply acquiesce to the great Satan and the new Satan.

We will find out the answer to: Did Pompeo capitulate to Russian demands on Syria in the next few weeks. If Assad aggressively commits atrocities in Idlib, he has the backing of this new understanding between the U.S. and Russia. Brave dictators tend to express their bravery by killing more civilians than necessary.

This is not a good day for Syria. Especially after the report by the New York Times detailing how prevalent and systematic have become the Assad prisons of torture against the Syrian civilian population.

Once again, women and children find themselves the victims of violence engineered by men whose brains pump too much serotonin, and too little emotions.

Did Pompeo Capitulate to Russian Demands on Syria?