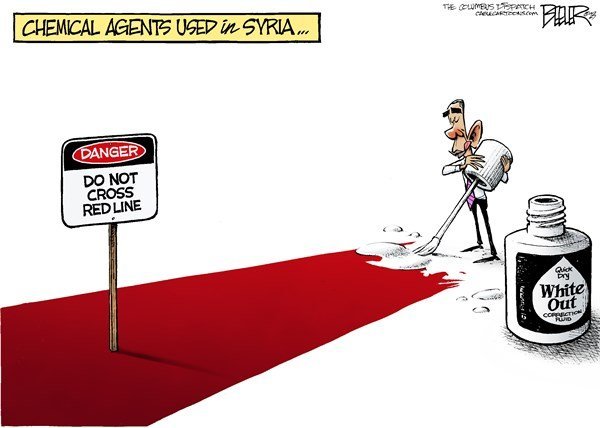 September 1, 2013 10:21 am 0
Are we at war with Islamic fascism?
Britain Must Break Away from Obama
The Assad Regime is Utterly Depleted of All Resources

Syria is the moral and strategic test that U.S. President Barack Obama neither sought nor wanted. He had done his best to avert his gaze from its horrors. He, the self-styled orator, had said very little about the grief of Syria and the pain of its children. When he spoke of Syria, it often sounded as though he was speaking of Iraq — the prism through which he saw the foreign world and its threats.

In his first term, his four principal foreign policy advisers — the secretaries of state and defense, the director of the Central Intelligence Agency, and the chairman of the Joint Chiefs of Staff — supported arming the rebellion in Syria: He overrode them. Earlier this year, he himself promised the rebels weapons that were never delivered.

History will record for Obama that it was Bashar al-Assad who dragged him into this fight. Obama had made much of the distinction between wars of choice and wars of necessity. He is said to have pondered theories of just and unjust wars. To this Syrian ordeal, he came late in the hour, after the barbarisms, after the veritable destruction of Syria’s nationhood, after the jihadis had carved out their emirates. It doesn’t matter much whether this entanglement is one of choice or of necessity. This is only partly a hand that Barack Obama was dealt. To a greater extent, he has shaped the conflict with the passivity he opted for in a standoff with a petty dictator who should have been thwarted long before.

Obama now makes his stand the lawyerly way, on very narrow grounds — the use of chemical weapons in the Ghouta, east of Damascus. True, the use of chemical weapons was a transgression all its own, the first since Saddam Hussein’s campaign of death and ruin in Kurdistan a quarter-century ago. But Assad had sacked and reduced to rubble ancient, proud cities. He had ignited a religious war between Sunni and Shiite Islam; he had sent vigilante squads to maim and kill across a volatile fault-line between Sunni and Alawite towns, with the transparent aim of “cleansing” whole communities. The peace and fabric of an old, settled country has been torn to shreds as its people have fled in terror into neighboring states. A million children, 740,000 of them younger than 11, the United Nations estimates, have been made refugees.

Why indict Assad on the chemical weapons attack on the Ghouta alone? One would think that the use of airpower against civilian populations would have sufficed as a trigger for military intervention. Pablo Picasso immortalized Guernica for the bombing it suffered in the Spanish Civil War. But Guernica was a small market town of 7,000 people, and it was attacked by German and Italian bombers; Aleppo, which endured the brutality of the regime’s fighter planes, is a city of more than 2 million.

The Obama administration has already announced an intended strike of limited duration and magnitude, and done even this with an air of doubt and irresolution. The dictator has already been told that his regime is off-limits. From the very beginning of this terrible war, Assad has been smugness itself. He had warned the rebels that no foreign cavalry would ride to their rescue. Borrowing a page from the book of his late father, Assad has openly proclaimed that America did not have the stamina for tests of strength in the Levant.

It is an unfortunate fact of Arab political life that adventurers can walk out of the wreckage of bitter defeats and claim victory before the gullible. Consider the trail: In 1991, the U.S. inflicted an overwhelming defeat on the regime of Hussein, but the Iraqi despot was spared, and the “Arab Street” that had rallied to him was never convinced that their hero had faltered.

Seven years later, during the presidency of Bill Clinton, it was time to go at Hussein again. Operation Desert Fox, an Anglo-American campaign, was meant to punish the Iraqi despot for his defiance of UN inspectors looking into his weapons programs. After four days of strikes, the thing came to an end, and Hussein took it as evidence of the weakness of Western powers.

In 2006, the leader of Hezbollah ignited a war on the Israeli-Lebanese border. He spun his own legend about the “divine victory” that his militia had secured. There had been death and economic ruin in Lebanon, but it was enough that Hezbollah was left standing after the fight.

The Syrian regime must then be denied the dividends of an inconclusive military campaign. The regime itself — its barons, its secret police, its elite military units and its air bases — ought to be legitimate targets, and the same is true of Assad’s presidential palace. There should be conviction and courage in this fight with the Assad dictatorship.

The truth of it is that the (Sunni) Arab world is now full of animus toward the Syrian ruler and his cabal. No tears will be shed for Assad. The vast majority of Arabs must dream of an end for him similar to the macabre fate that befell Muammar Qaddafi. The unwillingness of the League of Arab States to support a military effort against Assad’s regime is a piece with the moral abdication of that group. That body is a league of despots that has never acknowledged truths known to practically all Arabs. No attention ought to be paid to the Arab League and its pieties. The classic Obama concern about antagonizing the sensibilities of the region can be set aside. This is “the East” and Western deeds play out under watchful eyes, in full view of people with a scent for the resolve and weakness of strangers. Obama has proudly proclaimed that he does not bluff. In his bunker, that petty Syrian dictator has called his bluff.

(Fouad Ajami, a Bloomberg View contributor, is a senior fellow at Stanford University’s Hoover Institution. He is the author of “The Syrian Rebellion,” published by Hoover Press.)