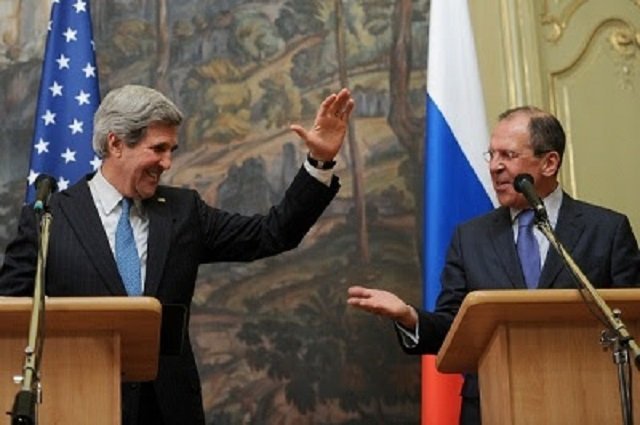 Desperate Times at the US State Department

It is known that wars produce casualties. But did you know that failed diplomacy produces even more death and destruction? Look no further than the disastrous combination of Syria and John Kerry to realize the desperate times at the US State Department that every diplomat senses. The day Barack Obama appointed John Kerry as Secretary of State, there was a morose fog that landed at Foggy Bottom, which has flatlined overnight our American potent diplomacy of yesterday.

John Kerry is acting like a desperate man. All you have to do is follow his under-achievements the last two months over Syria to realize the man is trying to clinch to a life jacket he permitted the Russians to own. John Kerry has been reduced to carrying messages for Lavrov, and the more he tries to extricate himself from this sinister predicament of his own making, the shorter his Russian leash becomes. To be realistic, even at the expense of sounding impolite, John Kerry has become Lavrov’s bitch in every sense of the word. He is willing to make any agreement with Russia that serves Russian interests, and then sell it as a triumph of US diplomatic achievements.

As far as our real diplomats are concerned who work so earnestly every day to make America stronger, it must look like desperate times at the US State Department with John Kerry at the helm. One cannot imagine how much our seasoned diplomats must suffer when watching a not-so-bright ex-US Senator blow the top off their building. They must suffer while watching their leader sell their store to the Russians for pennies every time Kerry meets with Lavrov. Here is one article that demonstrates amply John Kerry as the misfit that he is to lead our diplomatic corps.

In fact, John Kerry has become a man looking for approval from Sergey Lavrov. There is a psychiatric meaning for such a behavior. It is called Histrionic Personality Disorder (HPD). Look it up and see the patterns forming around John Kerry’s personality.

Every instance a new idea generates enough interest to pursue with regard to Syria, John Kerry rushes to Lavrov to seek his approvals. Compare this style of diplomacy to Secretary George Schultz, who imposed his will upon our enemies backed by American power, to realize the infantile role John Kerry has permitted our US diplomacy to play on the world stage. Lavrov is able to manipulate John Kerry like play-dough because the Russians know Barack Obama has no balls to confront them. It is the classic one-two punch that showed Russia the way to defeat America in the Middle East.

Honestly, why are our career diplomats so quiet about John Kerry’s scary diplomacy is a mystery to us. Is it because none of them feels safe as an anonymous source due to Obama’s NSA reach? Probably. They are all afraid they may jeopardize their hard-earned careers if they step outside the tiny circle Barack Obama drew for them the day he appointed John Kerry to lead them. Maybe a retired diplomat might dare express how calamitous John Kerry has been to Foggy Bottom. Let us hope so.

Enough is enough of Kerry’s missteps and Histrionic sorry-ass. Let us expose this weak and fraudulent diplomat. America deserves better than to have her own Secretary of State become our enemies’ number one bitch.

Desperate Times at the US State Department

Send Assad a message he will understand
Burying Malaise of Internal Breach by Buying Praise for Global Outreach
The Free Syrian Army vs. the Syrian National Council — Which Should We Support?
Opinions 890 Syria 450