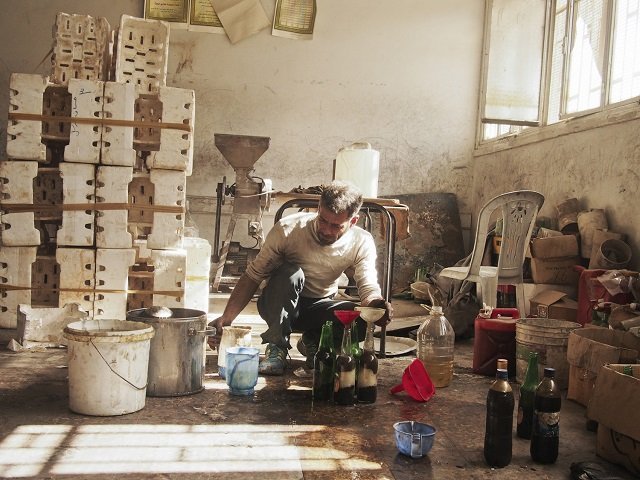 With Western countries reluctant to aid Syria’s opposition, a cottage industry has sprung up to supply the increasingly desperate rebel forces fighting President Bashar Assad with ammunition and arms for the battlefield, using whatever materials are available.

“We killed a lot of his soldiers using our homemade weapons,” Saif, a Free Syrian Army soldier, told NBC News. “We even repair the weapons that we get through our battles with the Syrian regime.”

“There are a lot of houses or warehouses that have been turned into workshops for the arms industry,” added the fighter, who did not want his last name to be revealed for fear of reprisals. “People are happy to support us. The main reason for this industry is the lack of required weapons for the Syrian fighters.”

They create weapons including rockets, cannons and car bombs using whatever they can find, working in homes across the country in the hopes they will stay under the radar of Assad’s forces.

“They work for 24 hours if the necessary materials are available,” Saif said. “Our weapons are not always accurate, but they are good and have a strong impact on the battlefield.”

The FSA began running training courses when it formed in June 2011 after the peaceful demonstrations turned into armed fighting. Because many have to learn on the job – dismantling unexploded bombs or rockets and handling the TNT inside – the fighters have also lost a number of men making the weapons.

But without support from the outside world, they say they have no alternative.

In June, President Barack Obama authorized sending military aid to the opposition after accusing Syrian forces of a nerve-gas attack which killed more than 1,400 people.

But so far there are few indications on the ground that many U.S. arms have made their way to the country – even as the United Nations and the Organisation for the Prohibition of Chemical Weapons (OPCW) work to remove and destroy Assad’s chemical weapons stockpile. The momentum seems to have sputtered with many lawmakers in Congress expressing concerns about weapons falling into the wrong hands.

“The opposition remains very fractured,” said Raffaello Pantucci, a Syria and counter-terrorism expert at Britain’s Royal United Services Institute think tank. “They fight together on the battlefield but they don’t agree ideologically. Among them you have groups that the Western governments think that they can deal with and you also have Islamist groups.”

Some of those groups — such as the al Qaeda-linked Islamic State of the Levant (ISIS) — “expanded their influence significantly in 2013,” according to a recent report by military journal Jane’s Defense Weekly. This has made them one of the most effective actors on the battlefield, Pantucci said.

“They want to establish an Islamic emirate where they will impose Shariah law and start exporting jihad,” he added. “So the last thing the West wants to be doing is arming people who want to start a war against them.”

Russia, which has its only naval facility outside of the former Soviet Union in Syria’s Mediterranean port of Tartous, continues to supply arms to its long-time ally Assad.

“Russia has been selling for a long time, has signed contracts and is completing deliveries of technology that consists of anti-aircraft systems,” Russia’s Foreign Minister Sergei Lavrov told reporters in October.

Both the U.S. and Russia are seeking to negotiate a peaceful solution to the bloody conflict at the “Geneva 2” conference in January. The war has killed at least 100,000 people over the past two-and-a-half years, according to U.N. estimates.

The lack of a unified military and political opposition in Syria is a formidable obstacle, Jeffrey White, a former senior intelligence officer with the U.S. Defense Intelligence Agency, told NBC News.

“[Some opposition groups] will try and cooperate because they want the backing of the Western states, so they’ll make an effort but I think their internal contradictions will make it very hard for them to be effective players,” said White, now a defense fellow at The Washington Institute think tank.

But the West’s perceived lack of follow through has frustrated many of the fighters trying to oust Assad.

FSA Captain Ammar al-Aswad, one of the first officers who defected from Assad’s army, said he had “lost hope in the Western countries.”

Al-Aswad added that he had participated in some of the early meetings with foreign officials assessing how to help the FSA obtain arms and ammunition.

“Let me tell you something. They were just lying to us. They didn’t even have the intention to help,” he said. “But we don’t need their help anymore.”