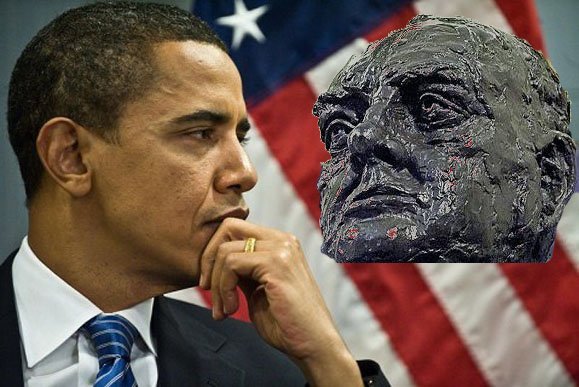 “The price of greatness is responsibility. If the people of the United States had continued in a mediocre station, struggling with the wilderness, absorbed in their own affairs, and a factor of no consequence in the movement of the world, they might have remained forgotten and undisturbed beyond their protecting oceans: but one cannot rise to be in many ways the leading community in the civilised world without being involved in its problems, without being convulsed by its agonies and inspired by its causes.” After reading this, it is almost impossible to describe mediocrity without saying Obama.

These words came from a speech Winston Churchill delivered in 1943 at Harvard University, the Alma Mater of President Obama.

Judging in how the President has tried his best to have everyone forget America beyond her protective oceans, he must have skipped that history class at Harvard.

Worse yet, he is not willing to pay the price of greatness; he would rather steal it with spin, lies, and constant dodging of serious attention to serious international matters.

In a democracy, this should be intolerable indeed, when one person is granted so much singular power by the people and the Constitution. I see a day, long after Obama leaves office, when men and women with great character debate an amendment to the US Constitution to match America’s great responsibilities, not shrink from them.

How is it possible, when one witnesses how this President turned his back on the Syrian Revolution that destroyed Syria instead of our enemies, not also describe mediocrity without saying Obama in the same sentence? No Syrians asked for US boots on the ground or for US funds. For heaven’s sake, Assad is firing SCUDS on civilians.

How is it possible, when one witnesses how this President turned his back on the Iranian people in June 2009 who courageously stood up to our enemies, not also describe mediocrity without saying Obama in the same sentence?

How is it possible, when one watches how the President has empowered the fundamentalist Islamists in the Middle East region, not also describe mediocrity without saying Obama in the same sentence?

David Rohde writes in The Atlantic an article everyone should read. It highlights the shortcomings and the lies of this administration with regard to Syria. It is almost impossible to describe mediocrity without saying Obama.

For one, the President has ordered all of our allies NOT to lend a helping hand to the Free Syrian Army with weapons it can defeat Assad with. I wrote about this in 2011 after I met a high UN Official in Europe who confirmed the matter to me as shocked as I was by it. Yet, Obama keeps lying about this issue. As if he is ashamed to admit the best secret everyone knows.

For two, it uses Israel as a scapegoat when an Obama official said to RohdeÂ “God forbid a U.S. weapon be used to strike an Israeli passenger plane or land in Israel” to describe why the President refuses to arm the Syrian Rebels. The Israelis know how to defend themselves from tens of thousands of rockets and missiles. Let them worry about that instead of putting them front and center as if it was Israel’s fault.

For three, one official is quoted as saying to Rohde “The United States has a long history of picking winners and losers based on the guy who speaks English well, it’s just trying to learn the lessons and be humble.” I have always said that Obama is learning-on-the-job because he skipped the steps a President ought to take to prepare him/her to be a great Commander-in-Chief, just like he skipped the history class on Winston Churchill at Harvard.

Dissidents in pursuit of freedom, democracy, and human rights tend to focus on a single target or goal. In the case of American-Syrians, we have concerns not only about Syria, but also about the well-being of the country that protected us from the likes of Assad. We have Assad to defeat and the illogical policies of Obama to be concerned with.

The worst part about this observation is that Obama is acting as if he is protecting one of the worst US enemies responsible for killing thousands of US Marines in Iraq.

When a President cannot find the courage the dispense of the enemies of his nation when delivered on a silver plate, mediocrity manifests itself. It is inevitable.