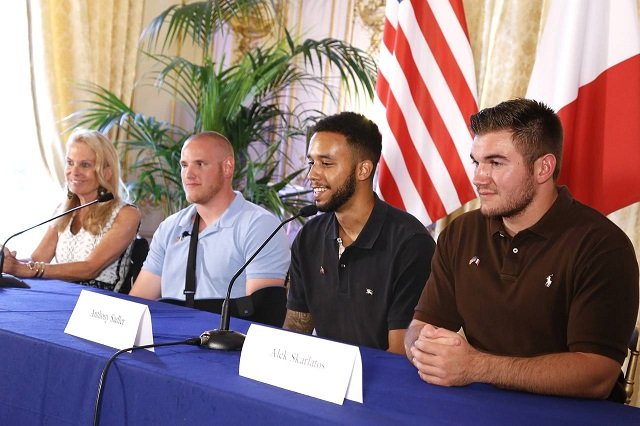 Defining Heroism Up Once Again

August 25, 2015 8:19 am 0
For Heaven’s Sake, We Are the United States of America
Happy Thanksgiving America
To Those Who Equate Syrian Refugees to Terrorists, Shut the FU

Source: The Wall Street Journal – by Ted Lindberg (Defining Heroism Up Once Again )

Aboard a train to Paris, suddenly leaping into action and risking death to save the lives of countless others.

We don’t yet know the full story of what a 25-year-old Moroccan citizen was doing on a Paris-bound train from Amsterdam Friday, armed, according to police, with an AK-47, a handgun and a box cutter. The reason we don’t is the quick action of two Frenchmen, a Briton and—most decisively—three Americans to subdue Ayoub El-Khazzani before he was able to act on his intentions.

The six who saved the day perfectly represent the modern face of heroism as it came to the fore in the 20th century: In a situation of extreme danger, they chose to expose themselves to additional risk, thereby saving the lives of others. Nowadays, in our mostly peaceful societies, the word “heroism” is often used as a synonym for everyday inspiring behavior, or steeliness despite suffering, or selfless generosity or any number of other exemplary actions. The actions of these six men, however, were the genuine, life-risking article.

As the world knows by now, a French banker, who has chosen to remain anonymous, was the first to confront Mr. El-Khazzani, according to authorities, followed by a French academic named Mark Moogalian, who reportedly grappled for the AK-47 and was shot in the neck by Mr. El-Khazzani with his handgun. Two of the Americans were off-duty U.S. servicemen: Oregon National Guard Specialist Alek Skarlatos and Airman First Class Spencer Stone, who, along with their friend, college student Anthony Sadler, charged Mr. El-Khazzani and subdued him. British businessman Chris Norman jumped into the fray as well. Though badly slashed in the face and thumb by the gunman with a box cutter, authorities said, Mr. Stone then attended to Mr. Moogalian, applying pressure to his neck wound, likely saving his life in addition to the countless others spared on the train that day.

The U.S. ambassador to France, Jane Hartley, has called the Americans “humble” heroes, a designation that seems to fit. These heroes showed no more concern for their own safety than did those described by Homer rampaging in battle. Yet the classical heroes of history and legend, from Achilles to Julius Caesar, set out on epic adventures to demonstrate their greatness.

Modern heroes, by contrast, don’t assert their own superiority, but rather try to eliminate danger to others, and, with luck, to themselves. Something inside them—the source of such a rarefied human quality will forever elude science—calls forth extreme acts of physical courage at a moment when others feel only the impulse to flee. The heroes on the train were six guys minding their own business on an ordinary day that, in a flash, suddenly required the extraordinary valor they summoned.

What causes some individuals to react heroically while others don’t? What made Lenny Skutnik, a federal employee, jump into the icy Potomac River in January 1982 to rescue a woman who had just survived the crash of an Air Florida jet? Something separated him from the many other onlookers who didn’t jump in. Mr. Skutnik, too, was a humble hero.

Most people are interested in self-preservation, and running toward a gunman isn’t an obvious way to enhance their chances of survival. Cowering in terror is always an option. So is trying to run away, even on a train. So is simply waiting it out in the hope that someone else will charge and subdue the attacker.

On Monday, French President François Hollande pinned the medal of the Légion d’Honneur, his nation’s highest decoration, on four of those six heroes, including the American trio. The award was created in 1802 by Napoleon Bonaparte, who wanted to establish a new decoration divorced from the feudal order of the ancien régime. The members of the Légion d’Honneur would be recognized simply on the basis of meritorious achievement.

It is accordingly an award that befits a democratic, egalitarian society such as France’s and our own. Anyone is eligible, but few will warrant the distinction. Those who put their own lives at additional risk and thereby save others qualify for a kind of distinction and a claim to superior virtue that doesn’t challenge but rather enhances the democratic character of modern society. We honor them for what they have done for us, not for themselves.

A familiar refrain from jihadists these days goes: “We love death more than you love life.” The claim is intended to prove the superiority of the jihadist cause over those of its modern, egalitarian enemies—the ultima ratio for why the jihadist cause will prevail, and why we should be afraid.

The heroes on the train in France—who showed that some who love life are willing to risk it, thereby saving the lives of others—offer a powerful counterargument. Though our heroes typically dwell among us unexceptionally day-in, day-out, when their moment is at hand, their inspiring courage is the antipode of fear.

Mr. Lindberg is a research fellow at Stanford’s Hoover Institution. His new book is “The Heroic Heart: Greatness Ancient and Modern” (Encounter).

Defining Heroism Up Once Again

Let Syrian Israeli Falafel War Begin
Syrians Caught between Devils You Ought to Know
Did You Know Jerry Seinfeld Is of Syrian Descent?
Things That Matter 382