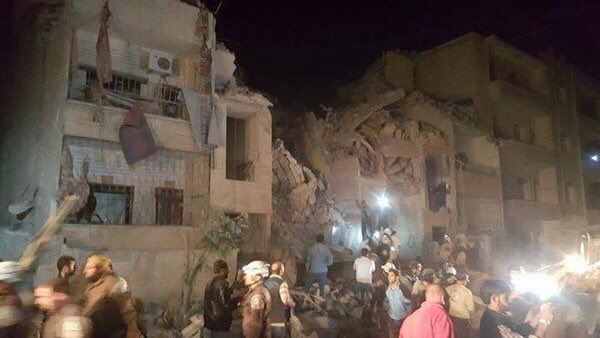 Women and children among the dead in attack on the hospital near the city of Idlib in the country’s northwest.

At least 10 people, including three children and four women, have been killed in air strikes on a hospital in northwestern Syria’s rebel-held Idlib province.

Al Jazeera’s Adham Abu Hossam, reporting from the site of the attack in Meles, a town about 15km from Idlib city, said Saturday’s raids had also left many in critical condition.

“Destruction is everywhere. This hospital has been targeted with four consecutive air strikes,” he said, adding that rescue teams continued the search for survivors.

Humanitarian groups have repeatedly called for a halt to strikes on medical facilities.

The Syrian Observatory for Human Rights (SOHR), a UK-based monitoring group, also reported the air strikes, saying it was not yet clear whether Russian or Syrian government jets had targeted the hospital

“The hospital now is completely out of service. According to doctors working in it, the hospital used to serve 70,000 people in this area,” said Al Jazeera’s Hossam.

“This is not the only hospital targeted by regime and Russian air strikes today.

“They also targeted a hospital in Sarmin [also in Idlib province] and it is now out of service. Other hospitals have been targeted in the last few days.”

Syrian American Medical Society (SAMS), the medical charity, said that July was the worst month for attacks on medical centers since the beginning of Syria’s five-year-old conflict.

“There were 43 attacks on healthcare facilities in Syria in July – more than one attack every day,” a SAMS statement said.

Opposition activists reported further developments in the northern Syrian city of Aleppo with the first humanitarian aid convoy containing food supplies coming in after rebels declared they had broken the government siege on Saturday.