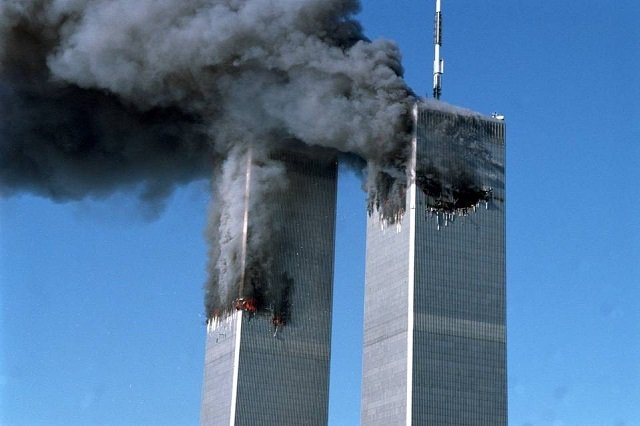 September 11, 2016 11:58 am 0
Russian Policy of Raping Muslim Women
What the Syrian Opposition Must Ask Kerry
Assad to Syrians is what AQ is to America

Fifteen years ago this Sunday, nearly 3,000 Americans were killed in the deadliest attack on the U.S. homeland in our history. A decade and a half later, we remain at war with Islamic terrorists. Winning this war will require an effort of greater scale and commitment than anything we have seen since World War II, calling on every element of our national power.

Defeating our enemies has been made significantly more difficult by the policies of Barack Obama. No American president has done more to weaken the U.S., hobble our defenses or aid our adversaries.

President Obama has been more dedicated to reducing America’s power than to defeating our enemies. He has enhanced the abilities, reach and finances of our adversaries, including the world’s leading state sponsor of terror, at the expense of our allies and our own national security. He has overseen a decline of our own military capabilities as our adversaries’ strength has grown.

Our Air Force today is the oldest and smallest it has ever been. In January 2015, then-Army Chief of Staff Gen. Ray Odierno testified that the Army was as unready as it had been at any other time in its history. Chief of Naval Operations Adm. Jonathan W. Greenert testified similarly that, “Navy readiness is at its lowest point in many years.”

Nearly half of the Marine Corps’ non-deployed units—the ones that respond to unforeseen contingencies—are suffering shortfalls, according to the commandant of the Corps, Gen. Joseph F. Dunford Jr. For the first time in decades, American supremacy in key areas can no longer be assured.

The president who came into office promising to end wars has made war more likely by diminishing America’s strength and deterrence ability. He doesn’t seem to understand that the credible threat of military force gives substance and meaning to our diplomacy. By reducing the size and strength of our forces, he has ensured that future wars will be longer, and put more American lives at risk.

Meanwhile, the threat from global terrorist organizations has grown. Nicholas Rasmussen, director of the National Counterterrorism Center, told the House Homeland Security Committee in July that, “As we approach 15 years since 9/11, the array of terrorist actors around the globe is broader, wider and deeper than it has been at any time since that day.” Despite Mr. Obama’s claim that ISIS has been diminished, John Brennan, Mr. Obama’s CIA director, told the Senate Intelligence Committee in June that, “Our efforts have not reduced the group’s terrorism capability or global reach.”

The president’s policies have contributed to our enemies’ advance. In his first days in office, Mr. Obama moved to take the nation off a war footing and return to the failed policies of the 1990s when terrorism was treated as a law-enforcement matter. It didn’t matter that the Enhanced Interrogation Program produced information that prevented attacks, saved American lives and, we now know, contributed to the capture and killing of Osama bin Laden. Mr. Obama ended the program, publicly revealed its techniques, and failed to put any effective terrorist-interrogation program in its place.

We are no longer interrogating terrorists in part because we are no longer capturing terrorists. Since taking office, the president has recklessly pursued his objective of closing the detention facility at Guantanamo by releasing current detainees—regardless of the likelihood they will return to the field of battle against us. Until recently, the head of recruitment for ISIS in Afghanistan and Pakistan was a former Guantanamo detainee, as is one of al Qaeda’s most senior leaders in the Arabian Peninsula.

As he released terrorists to return to the field of battle, Mr. Obama was simultaneously withdrawing American forces from Iraq and Afghanistan. He calls this policy “ending wars.” Most reasonable people recognize this approach as losing wars.

When Mr. Obama took the oath of office on Jan. 20, 2009, Iraq was stable. Following the surge ordered by President Bush, al Qaeda in Iraq had largely been defeated, as had the Shiite militias. The situation was so good that Vice President Joe Biden predicted, “Iraq will be one of the great achievements of this administration.”

Today, Iraq’s border with Syria has been erased by the most successful and dangerous terrorist organization in history. ISIS has established its “caliphate” across a large swath of territory in the heart of Syria and Iraq, from which it trains, recruits, plots and launches attacks.

On Aug. 20, 2012, Mr. Obama drew a red line making clear he would take military action if Syrian President Bashar Assad used chemical weapons. A year later, Mr. Assad launched a sarin-gas attack on his own people in the suburbs of Damascus. Mr. Obama did nothing—a failure that destroyed America’s credibility and strengthened the hand of our adversaries.

We now know that the president’s refusal to act came as the Iranians and the U.S. were engaged in secret talks about Iran’s nuclear program. In his new book, “The Iran Wars,” Wall Street Journal correspondent Jay Solomon writes that according to Iranian sources, “Tehran made it clear to the American delegation that the nuclear negotiations would be halted if the U.S. went ahead with its attack on Assad.” The Iranians were now in the driver’s seat, not just regarding their own policy in the Middle East, but in determining America’s.

President Obama and Secretaries of State Hillary Clinton and John Kerry were so concerned with pleasing Iran’s ruling mullahs that they were willing to overlook the American blood on Iranian hands and decades of Iran’s activities as the world’s leading state sponsor of terror. In pursuit of the nuclear deal, they made concession after dangerous concession.

Every promise made to the American people about the Obama nuclear agreement has been broken. We were promised a “world-class” verification process. Instead, the Iranians are allowed in key instances to verify themselves.

We were promised that non-nuclear sanctions, including those that block Iran’s access to hard currency and our financial systems, would remain in place. Instead, the Obama administration has paid the mullahs at least $1.7 billion in cash, which includes at least $1.3 billion in U.S. taxpayer money, the first installment of which was ransom for the release of American hostages.

In case there is any doubt that the regime will use these funds to support terror, Iran’s parliament recently passed Article 22 of its 2016-2017 budget, mandating that all such funds be transferred directly to the Iranian military. Fifteen years after 3,000 Americans were killed by Islamic terrorists, America’s commander in chief has become the money launderer in chief for the world’s leading state sponsor of terror.

Iran isn’t the only adversary benefiting from the age of Obama. Russia is threatening NATO, invading sovereign territory, selling air-defense systems to the Iranians, using its military to defend the Assad regime, bombing American-backed rebels in Syria, and playing a larger role in the Middle East than at any time since Anwar Sadat expelled his Soviet advisers from Egypt in 1972.

Across the region, nations that previously were strong American allies are making different calculations. Russia is seen as a reliable ally standing with Mr. Assad, while the U.S. walks away from its friends. The steady stream of visitors from the Middle East to Moscow, including most recently Israeli Prime Minister Benjamin Netanyahu, is evidence of Moscow’s growing role in the region. Neither Russia nor Vladmir Putin shares America’s interests.

China is also ascendant—threatening freedom of navigation through the South China Sea and developing weapons systems that directly threaten American military superiority. North Korea represents a growing nuclear threat to the U.S. homeland. Mr. Obama’s announced pivot to Asia turned out to be hollow, further alienating our allies and emboldening our enemies in the region.

Undoing this damage will require an effort of historic proportions. Our next president must abandon Mr. Obama’s fantasy that unilaterally disarming, retreating and abandoning our allies will bring peace and security. We must begin at once to rebuild our military. This means ending sequestration and returning to a Defense Department budget built around defeating the threats to our nation. We must remedy readiness shortfalls, modernize and upgrade our nuclear arsenal, develop and build a robust missile-defense system, and invest in technologies necessary to maintain our military superiority, particularly against advances by adversaries like Russia, China, Iran and North Korea.

Among the most important lessons of 9/11 was that terrorists must be denied safe havens from which to plan and launch attacks against us. On President Obama’s watch, terrorist safe havens have expanded around the globe.

Our next president must recognize that Islamic terrorists pose an existential threat to the U.S., and must instruct the military to provide plans necessary to defeat them and deny them safe havens. These should include expanding the pace of our air campaign against ISIS, removing the onerous rules of engagement, and dedicating additional special operators and other American forces as necessary to defeat our enemies.

Winning the war against Islamic terrorists will also require that we rebuild our intelligence capabilities. Our next president should reinstate the Enhanced Interrogation Program, ensure that Guantanamo remains open so we have a facility to hold enemy combatants, and increase our intelligence activities so we can identify and disrupt plots before they are carried out.

We must make clear that we will not allow Iran to obtain a nuclear weapon or become nuclear capable. Our next president should renounce the Obama-Clinton nuclear agreement, develop a strategy in consultation with our allies in the region to address Iran’s state sponsorship of terror, and make clear that all options are on the table where Iran’s nuclear program is concerned.

We must also rebuild our relationships with allies across the globe so that we can build the coalitions necessary to defeat Islamic terrorism and restore our strength and power. This includes reinvigorating NATO and affirming America’s unshakable commitment to the most effective military alliance in history.

Generations before have met and defeated grave threats to our nation. American strength, leadership and ideals were crucial to the Allied victory in World War II and the defeat of Soviet Communism during the Cold War. It will be up to today’s generation to restore American pre-eminence so that we can defend our freedom and defeat Islamic terror.

Since World War II, America has been freedom’s defender—for ourselves and for millions around the world. We do this because our security depends upon it and because there is no other nation that can.

As Americans calculate the costs of leadership, we must remember that the costs of failing to lead—or of inaction—are much higher. Imagine a world where Russia, Iran, China and North Korea set the rules; where militant Islam spreads its evil ideology unchallenged across the globe; where parts of Europe are once again enslaved by Russia, our NATO alliance impotent; and where China achieves military superiority over the U.S. and dominates Asia and beyond.

Finally, imagine a world where the terrorists and their leading state sponsor have nuclear weapons. Fifteen years after 9/11, we can say with certainty that this is the world that will be created by withdrawal and retreat—by Barack Obama and Hillary Clinton’s policies—if we don’t reverse course.

For Syrians to Upstage Assad, Israel Must Take Their Side
Is Irrational Trump a Danger to National Security?
The Talents of Barack Obama
Opinions 1017 Radicalism 567 Things That Matter 382 Western Appeasement 483