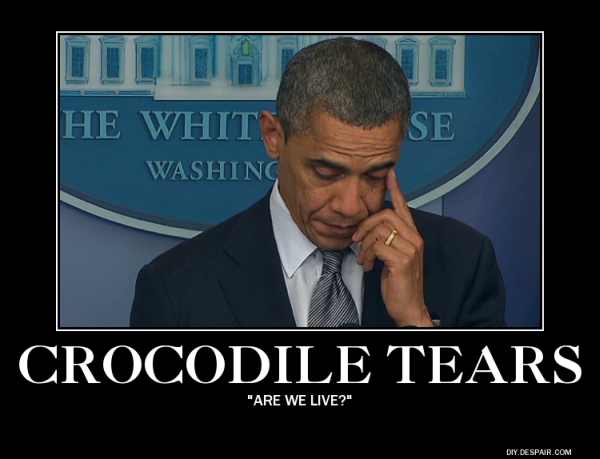 Have you noticed a strange trend in Obama’s behavior with regard to the Jews around the world? Every time a Jew is murdered, the crocodile tears president cries while at the same time every opportunity he has to make life easier for Israel, he stabs the Jews in their hearts.

In Jerusalem, Obama condemned the horrific attacks against the Jews that killed three Americans. However, he ignored Assad and Khamenei assisting the Palestinians in their quest to terrorize Israelis. If he really cared, why does he not condemn both terrorists publicly for their involvement?

People compare Obama’s era to Chamberlain’s. One of appeasement and diplomacy. The truth is far worse. This administration looks forward to the rise of another Hitler to kill the Jews. As Obama watches Assad burn, ravage, and destroy, he is saying to himself “I found my Hitler. Keeping him safe is now my top priority.” This is why he refuses to stop his massacres against Syrian civilians. For Obama, Assad butchering his own people is a sign he will do worse against the Jews.

To protect the little Hitler in Damascus, Iran is building a 100,000 strong Hezbollah-like army in Syria. Did you hear Obama condemn this move at all, anywhere? Why not? Asking the hard questions is the first order to understanding veiled evil.

Of course, Obama and his inner circle cabal will deny their devious plan until Gherkins Khan rises from his grave (Watch out for Valerie Jarret). As the British say, “the proof is in the pudding”. Well the pudding was the Muslim Brotherhood in Egypt, a safe Assad showing off his barbarism, a safer Iran threatening Israel constantly with destruction for which Obama keeps mum about, and Gaza, which Obama wants to legitimize with international credibility. West, North, East, and South. Is that a hug Mr. President?

Beware of anyone who claims he is out to protect you while surrounding you with your enemies; all terrorists and mass murderers the world has not seen since WWII.

Beginning 2009, Obama helped the Muslim Brotherhood ascend to power in Egypt, and simply sat back as the organization began threatening Israel with Jihad. He refused to interfere or even scold Morsi for his excesses. When Morsi failed and Egypt returned to normal, Obama was more determined than ever to shield Assad from any harm. His “Hitler” protégé must win this war even if he destroys Syria because Obama has a job for him.

When Assad forged ISIS (Don’t believe me? Read for yourself here, and the US State Department tongue slip here), it got out of his control and threatened both Assad and Iran. Who comes to their rescue immediately flying to save their necks?

Did you ever hear about the Khorasan group before, the excuse Obama used to protect Assad and Iran from ISIL? This is what we call “wagging the dog”. As far as Obama, and his inner circle conspiring against Israel, is concerned, no harm should come to either the terror machine of Khamenei or Assad. Both must remain safe and ticking. Obama is not about to lose either as he lost Egypt.

During the Gaza attack on Israel, Palestinians armed with rockets and missiles rained them on more than half the population of Israel, Obama tried to interfere publicly by seeking a truce. Since when a US President provides a seat at the table to a bunch of terrorists on equal basis to our ally Israel? It is as if Norway asked the United States to sit with al-Qaeda in Washington to hammer out their differences. Are you kidding me?

That Gaza war, as far as I am concerned, was Obama’s way to test Iran and Assad for their loyalty toward his grand scheme of annihilating the Jews. There is a good reason why we know so little about Barack Obama’s past. Never forget Obama was a community organizer or to put it mildly, someone who stuffs envelopes and rings doorbells. Would you take this job if you had a degree from Harvard? Unless you were an extreme ideologue of the first order, you would not.

As far as the letter that Obama wrote to Khamenei, everyone thinks this leak was an accident. IT WAS NOT. Obama wants everyone to believe he is truly working to keep the peace, so he leaked the letter to keep his opponents guessing. Do not let such deviousness fool you. Obama wants Iran to build a nuclear bomb, but he must NOT look like he is helping Khamenei. I will bet my toaster that come November 24, there will be another delay.

The excuse that Obama wants everyone to believe is that he is an isolationist, which is total crap. An isolationist does not choose where to fight wars (Libya but not Syria, ISIL but not Hezbollah).

Furthermore, do not forget an essential trait of Obama’s personality. HE IS HEARTLESS. Remember when he eulogized James Foley and ten minutes later he was laughing his heart out on a Golf course? A true crocodile tears president.

Are you watching the stubbornness of Obama in US domestic policies even when his party was clobbered at the polls? That defeat would have humbled any US President, but not Obama because he is on an extreme mission.

During the last six years, Obama provided Iran with the space and the time to get stronger. Enough so that when he leaves office in 2017, Iran would have crossed the Rubicon in terms of invincibility. Either because it will possess the bomb or because it has spread its evil in so many countries that it would be impossible to dislodge her tentacles. Iran now occupies four different Arab countries when it had only a presence in Lebanon during George Bush.

Get smart people. Time is our enemy. Unless Saudi Arabia, Egypt, and Israel build an Arab army with ONE purpose to confront the evil of Assad and Khamenei, by the time Obama leaves office, we will all be slaves to their terror. In Syria, Assad’s liberal Generals who defected would rule as they do in Egypt.

Egypt has the mass, Israel the technology, and Saudi Arabia the money. Building an army is just a question of will. And we have so little time left.