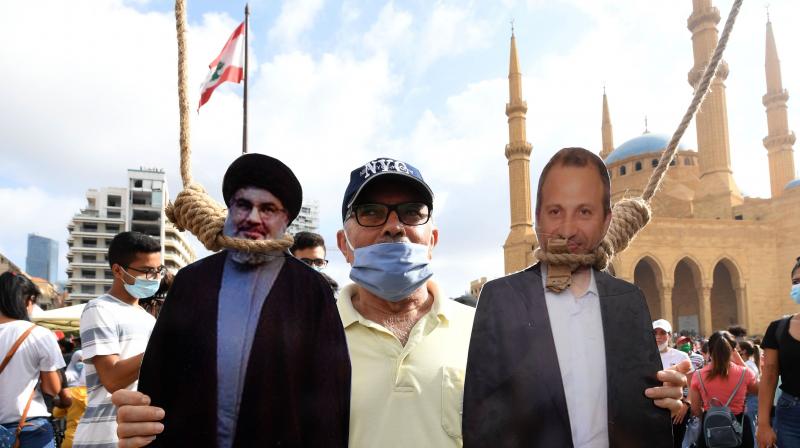 Step back for a moment and consider the number of countries that benefit from the demise of Hezbollah. On a global level. The success of the terror organization spreading death and destruction has paralyzed its opponents and gave rise to appeasers who believe they can, through quiet diplomacy and submission, tame their terror.

But can they really?

LEBANON BENEFITS THE MOST

Lebanon is a truly special and amazing country. All those who visit, interact with its people, or simply learn about its history come away in awe of its impact. It represents the perfect example of the idiom that goes: Biggest bang for the buck.

The Lebanese people are quick to point out their history as the inventors of the first Alphabet during the times of the Phoenicians. Incidentally, the Phoenician language is very close to Hebrew, which begs the question: Which country is best suited to be friendlier to Lebanon? Israel or Iran?

By far Lebanon would benefit the most with Hezbollah’s demise. Not only its people could breathe easier knowing that Hezbollah’s arsenal of missiles are not pointed at them, but also because no Muslim extremists are capable of producing bright futures for any country. This is not their business. Theirs is about revenge, violence, and mass murder.

The history of Hezbollah in Syria is one of unbelievable violence against helpless women and children. The same kind Hezbollah does not dare attack in Israel because it fears the response. But in Syria, Hezbollah is immune from accountability and practices its statecraft with zeal and evil malice. In the future, Syria will build its array of museums to showcase the last 10 years of violence. Among those will be a dedicated Hezbollah museum with a centrist theme highlighting what Muslim extremists, like the terrorist Hezbollah, are capable of doing.

Mass graves? Hezbollah dug too many. Setting wild snipers on pregnant Syrian women foraging for food in garbage bins? Hezbollah terrorists enjoyed every minute of it. Targeting school children? One less Sunni is one less Sunni.

The museum would screen all the testimonies of so many European doctors who witnessed first-hand Hezbollah’s terror against pregnant Syrian women. How it forced conversion to the Shia faith like ISIS forced the conversion of Yazidis. Tens of thousands of Syrians are willing to testify once Assad is gone. There is nothing in Syria that spills blood, sweat, and tears Hezbollah did not violently cause.

How could you blame the Israelis when faced with a terror organization whose whole raison d’être rests on one simple idea: Erase the Jewish race?

ISRAEL WILL NOT REST

There is no hiding the hate that exists between Hezbollah and the State of Israel. How could you blame the Israelis when faced with a terror organization whose whole raison d’être rests on one simple idea: Erase the Jewish race? In Israel, Hezbollah met its most lethal foe. One, we believe, that one day will annihilate it into oblivion. But until then, Israel is in a constant state of alert against a terror group that is armed to its teeth with missiles able to strike their schools and hospitals.

There is no doubt that a new war is coming that will peg the Israelis against Hezbollah terrorists. As sophisticated as its intelligence gathering is, Israel will only engage Hezbollah with the highest probability of success and the minimum loss of life. So while it seems that time is working for Hezbollah, the reality is that Israel is making the most of its time to accurately terminate Hezbollah for good. Israel is not going to lose that war.

From a superpower’s point of view, the Middle East is a cauldron of smoldering ashes that could, at any moment, erupt into a devastating Armageddon. It is imperative for the United States to stabilize the region by tipping the balance in favor of those countries willing to seek the same goals. Organizations, like ISIS, al-Qaeda, and Hezbollah disturb the equation. Think of them as the matches that could start World War III.

After all, it took one assassin to kill Archduke Franz Ferdinand to start WWI.

Although the United States has successfully defeated the Sunni extremist groups, the Shia extremists are pausing its resolve. The logic should dictate that if we can bomb ISIS to kingdom come, we should also be able to blow Hezbollah to their waiting virgins. Why not? Because the danger to Israel is real and because the U.S. is also playing the waiting game until Hezbollah crosses the hairs of its scope.

OTHER COUNTRIES THAT BENEFIT FROM THE DEMISE OF HEZBOLLAH

There are many other countries that would also benefit from Hezbollah’s demise. Saudi Arabia, the United Arab Emirates, and the Gulf countries in general because it weakens Iran.

Europe would benefit because Hezbollah, indirectly, caused the immigration mayhem from Syria. It could do it again in another Sunni Arab country, and there are quite a few of them.

Turkey might one day benefit when it restructures itself as a secular state rather than one adhering to the ideology of the Muslim Brotherhood. So will Central and South American countries Hezbollah is using for drug smuggling, or African nations with a large population of Lebanese emigres Hezbollah has tapped into to fund its terrorist activities. With Hezbollah gone, the U.S. would ease its Herculean financial monitoring of those African nations.

Besides the ancillary benefits Arab societies might derive from the knowledge of Israel, it is important to stand by Israel for another reason: To help neutralize Hezbollah and direct its supporters towards a life of peace and co-existence.

Think of it this way. With Hezbollah still terrorizing, we stand at DEFCON 2. Without Hezbollah, we drop to DEFCON 4.

The risks are worth it.