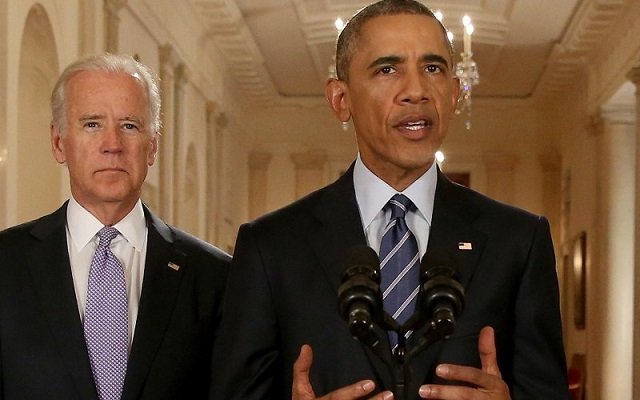 Congress Must Reject Deal to Avoid Future War With Iran

The U.S. Congress received the Iran nuclear agreement on Sunday and it will have 60 days starting Monday to decide whether to reject the deal. President Barack Obama acceded in May to a review demanded by Congress and has agreed not to waive U.S. sanctions during that period.

For 22 days after that period, Obama could veto a resolution as promised and Congress could try to override it. Overriding the veto will require a two-thirds majority of both the House of Representatives and Senate.

Congress must reject deal as it is negotiated to avoid a future war with Iran. Iran aggressively pursuing expansionist policies against our allies facilitated by the President will force the U.S. to interfere militarily in the future to stop Iranian terror and aggression.

The issues drawing the greatest attention of lawmakers as they start to consider the deal range from inspections to sanctions.

INSPECTIONS – The deal gives United Nations inspectors, with no Americans included, access to suspect Iranian military sites, while giving Tehran 24 days to provide access to the facilities, which is ample time to hide any evidence.

Lawmakers who wanted “anytime, anywhere” inspections will want to know how this will ensure that Tehran will not cheat. They worry the delay could allow compromising material to be destroyed. “A lot can be done in 24 days,” said U.S. Representative Steve Israel, a Democrat.

Congress must reject deal if it wants to protect U.S. interests in the Middle East.

ARMS EMBARGO – Congressional questioning about the nuclear deal has focused on the lifting of a U.N. ban on Iran for conventional weapons after five years and for ballistic missile technology after eight years. These issues were negotiated by Tehran the last minute and Obama caved to their demands.

“It is hard for us to accept it, so we just want to take a look at it,” said Ben Cardin, the top Democrat on the U.S. Senate Foreign Relations Committee. Lawmakers worry that Tehran’s access to advanced arms, even years down the line, would enhance its ability to fuel regional sectarian strife and threaten U.S. ally Israel.

The Obama administration says the deal is the only alternative to Iran moving forward on developing a nuclear weapon. Those rejecting the deal claim Obama gave away the house with his horrible negotiating skills.

Congress must reject deal if it wants to contain Iranian terror and violence in the region already simmering in four different Arab countries.

SANCTIONS – Under the deal, the main oil and financial sanctions could be lifted this year. Many lawmakers questioned the wisdom of giving Iran access to up to $150 billion in revenue before it proves it will adhere to the agreement.

“That is an immediate, giant benefit to the Iranian regime,” said U.S. Representative Brad Sherman, a Democrat. Sherman said he worried the money made available to Tehran would be funneled to Syria’s Assad or militants fighting U.S. allies, or even Americans. Is he saying Valerie Jarrett will get her cut?

Congress must reject deal if it wants to protect Israel from an Iranian onslaught Obama seems oblivious to its results.

PRISONERS – Even lawmakers who are prepared to support the deal said they were disappointed that it did not include the release of former U.S. Marine Amir Hekmati, Christian pastor Saeed Abedini, Washington Post Tehran bureau chief Jason Rezaian and former FBI agent Robert Levinson. Obama shamed a reporter who asked him why he ignored Americans languishing in Iranian jails.

Congress must reject deal if it wants our prisoners to come home. Obama traded for Bergdahl but found every excuse not to bring our own home.

UN SECURITY COUNCIL VOTE – Both Republicans and Democrats, including the chairman and ranking member of the influential Senate Foreign Relations Committee, do not want the United Nations to vote on the Iran nuclear deal before the 82-day U.S. review period ends in September. After stopping in at a meeting between Vice President Joe Biden and committee Democrats, Senator Bob Corker, the panel’s Republican chairman, called the vote, now set for Monday, “an affront to the American people.” Cardin co-signed a letter urging Obama to postpone the vote.

Congress must reject deal if it wants to remain in control of the behavior of rogue countries Obama is happy to relegate to the U.N. with a history of infatuation towards tyrants and despots.

Congress Must Reject Deal to Avoid Future War With Iran