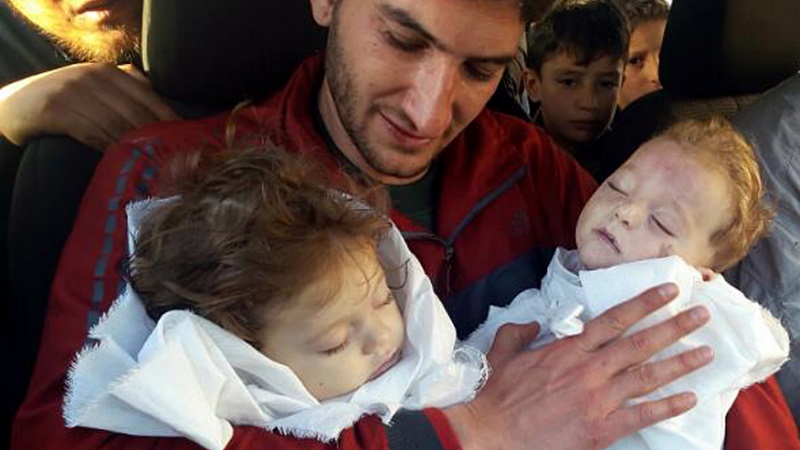 Members of the Organization for the Prohibition of Chemical Weapons (OPCW) established the special investigative unit in 2018. Its goal is to identify perpetrators of illegal attacks. Until now the OPCW had only been authorized to say whether chemical attacks occurred, not who perpetrated them.

This is the first time OPCW points the finger at the perpetrators.

ASSAD AND PUTIN ALWAYS DENY WHAT IMPLICATES THEM IN WAR CRIMES

Officials in the government of Chemical Assad and its military backer Russia have repeatedly denied using chemical weapons. They instead accuse insurgents of staging attacks to implicate Syrian forces. To this day, barbaric Putin still denies his government doped Russian athletes too. Even with overwhelming evidence to the contrary.

U.S. Secretary of State Mike Pompeo said in a statement the United States concurred in the new report’s findings. He called the report:

… the latest in a large and growing body of evidence that the Assad regime uses chemical weapons attacks in Syria as part of a deliberate campaign of violence against the Syrian people.

Washington also assesses that Assad’s government retains enough sarin and chlorine and expertise “to use sarin, produce and deploy chlorine munitions and develop new CW (chemical weapons),” Pompeo said. Damascus should immediately halt the production, stockpiling and use of such weapons, he said.

The OPCW Investigation and Identification Team (IIT) said the attack impacted more than 100 people by the 2017 attacks, carried out on March 24, 25 and 30 in the town of Ltamenah.

According to the IIT report, the 50th Brigade of the 22nd Air Division of the Syrian Air Force dropped M4000 aerial bombs containing sarin on the town. They also dropped a cylinder containing chlorine on a hospital. The Assad regime conducted the raids using the Sharat and Hama air bases, it said.

POINTING THE FINGER AT ASSAD

Then the report dropped the bomb by saying:

Military operations of such a strategic nature as these three attacks only occur pursuant to orders from the highest levels of the Syrian Arab Armed Forces.

In other words, Assad ordered the attacks.

While individuals were identified by the OPCW investigators, their names have been redacted from the report, which was to be circulated to the OPCW’s 193 member states on Wednesday.

There are reasonable grounds to believe that the perpetrators … were individuals belonging to the Syrian Arab Air Force.

The OPCW’s identification team is not a judicial body and it will be up to OPCW’s members, the U.N. Secretary General and the international community to “take any further action they deem appropriate and necessary”, OPCW chief Fernando Arias said.

Russia and China will veto any U.N. action. Unless President Trump takes a unilateral action against the Assad regime, which is almost not going to happen.

An attack on the Syrian town of Douma led U.S. President Donald Trump to carry out missile strikes on Syrian government targets in April 2018 with the backing of France and Britain.

Created in 1997, the OPCW was initially a technical body to enforce a global non-proliferation treaty. It has become the focus of diplomatic conflict between Syria and Russia on one side and the United States, France and Britain on the other.