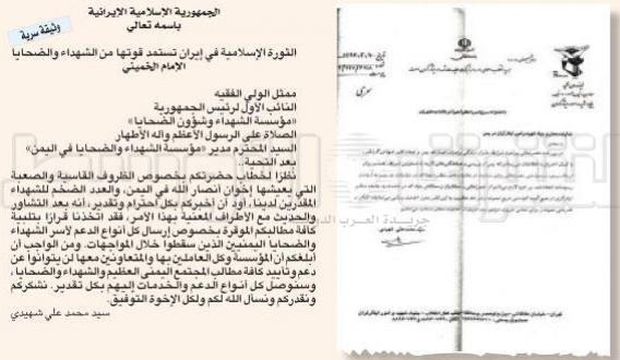 Tehran-A copy of a high-level classified document obtained by Asharq Al-Awsat has revealed the extent of Tehran’s support for the Houthi movement currently in control of large parts of Yemen.

Informed sources told Asharq Al-Awsat the message is a reply to a request by the Quds Force on behalf of the Yemen Martyrs Foundation.

The Quds Force is an elite division of Iran’s Islamic Revolutionary Guard Corps involved in various operations outside Iran, including fighting the Islamic State of Iraq and Syria (ISIS) in Iraq.

The sources say the Quds Force requested the Iranian Martyrs Foundation to increase its financial support for the Houthis to 3.7 million US dollars due to the heavy losses the Houthis have sustained in recent months following Saudi-led airstrikes targeting the group in Yemen.

In the message, Shahrati says the Iranian Martyrs Foundation is ready to meet the requests for support to the families of the Houthis, addressing them as “Ansar Allah,” an alternative moniker for the group.

“In response to your message regarding the harsh and difficult circumstances which the brothers from Ansar Allah [the Houthis] are currently experiencing in Yemen, and the large number of martyrs we have lost, I would like to inform you with all respect and esteem that after consultations and discussions with the relevant parties in this affair, we have taken the decision to fulfil all your esteemed requests relating to sending all forms of support to the families of all the Yemeni martyrs and victims who have fallen as a result of the current conflict,” the message says.

It continues: “It is incumbent upon me to inform you that the [Iranian Martyrs Foundation], its employees, and all those who cooperate with it, will not delay in supporting all the demands of the great Yemeni people and the martyrs and victims, and we will continue all forms of support for them with all respect and esteem . . .”

The Iranian Martyrs Foundation was founded by Ayatollah Ruhollah Khomeini in the early 1980s following the start of the Iran–Iraq War. The Foundation aims to help the families of soldiers killed in the conflict through financial and other means of support.

They added that a list of Houthis killed in the current conflict has been sent from the Houthi leadership to Quds Force commander Gen. Qassem Suleimani twice a month since the conflict in Yemen began.

Families of Houthi “martyrs” are then able to obtain the same compensation offered to their Iranian counterparts, including financial support, clothing, and access to healthcare.

Iran has been accused by Yemen’s internationally recognized government and Saudi Arabia and its allies of aiding the Houthi coup in Yemen.

The Houthis overran the capital Sana’a and took over government and military buildings and facilities last September. They then launched a coup in February, dissolving the cabinet and putting President Abd Rabbuh Mansur Hadi under house arrest.

Hadi eventually fled to the Saudi capital Riyadh where he formally requested Saudi Arabia and its Arab allies to intervene in Yemen in order to restore political legitimacy. The Saudi-led aerial campaign targeting the Houthis began in late March.

Expansionist Iran no more
Pakistan to Iran, don’t mess with Arab countries
US joins Saudi coalition against the Houthis
Radicalism 547