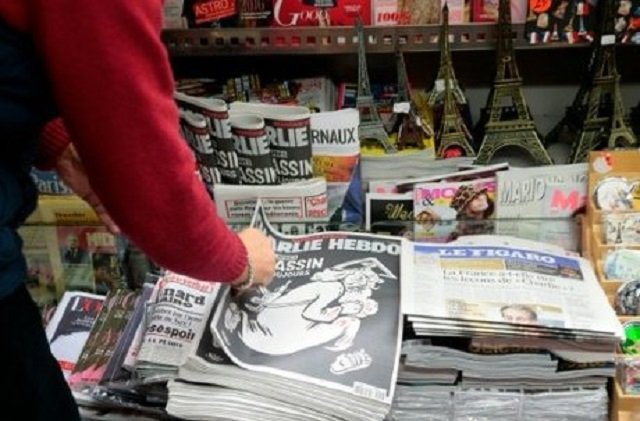 Charlie Hebdo Loses Many of Its Supporters

Jordan’s Queen Rania has hit back at a cartoon in French satirical magazine Charlie Hebdo depicting drowned Syrian toddler Aylan Kurdi as a grown-up committing sexual harassment in Germany. As a result, Charlie Hebdo loses many of its supporters who stood by the magazine after the terror attack it experienced.

The cartoon shows a pervert chasing a woman, with the caption asking: “What would have become of small Aylan if he grew up?”

“Someone who gropes asses in Germany,” it added, referring to the multiple acts of sexual assault blamed on migrants on New Year’s Eve.

In response Queen Rania posted a cartoon on Facebook and Twitter by Jordan’s Osama Hajjaj depicting the little boy lying face down on the beach alongside an older child with a backpack and finally a doctor.

The queen added the caption: “Aylan could’ve been a doctor, a teacher, a loving parent.”
Her Tweet said it all:

Aylan could’ve been a doctor, a teacher, a loving parent…

One of Queen Rania’s Twitter followers summed up how many people felt towards the crudity of Charlie Hebdo shock cartoon.

@QueenRania @osamacartoons Shame on you @Charlie_Hebdo_ cartoonists! Aylan deserved to live equally like your children deserve to live too!

The Charlie Hebdo drawing has triggered sharp criticism on other social networks as well while Aylan’s relatives in Canada expressed “disgust”. Charlie Hebdo loses many of its supporters when it bashes the symbols of our humanities.

The magazine, contacted Thursday by AFP, declined to comment.

Charlie Hebdo is a French satirical weekly magazine, featuring cartoons, reports, and jokes. With its Aylan satire, the magazine went too far astray of any decent behavior.

On January 7, 2015, jihadist gunmen killed 12 people in an assault on the Paris offices of Charlie Hebdo, which had been a target since publishing cartoons of the Prophet Mohammed in 2006. The attack killed its editor Charb and many of its top cartoonists.

Charlie Hebdo Loses Many of Its Supporters