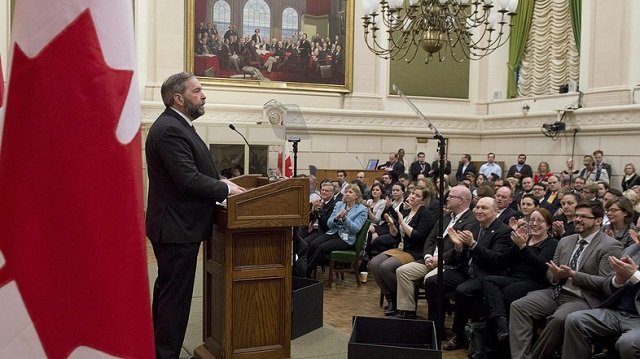 September 6, 2015 10:13 am 0
Britain Reacts to the Petition to Air Drop Food for Madaya
[Assad] Man held on accusations of war crimes in Syria
Their Oxygen is Our Stupidity

Conservatives in North America have this nasty habit of often not being able to predict what is good for their own future. Nothing exemplifies this more than the Conservative Party in Canada led by Prime Minister Stephen Harper rejecting Syrian refugees.

As the Syrian refugee crisis became a major campaign issue this week, the Canadian opposition party New Democrats promised Saturday to welcome Syrian refugees to Canada if it wins the upcoming legislative elections.

The announcement follows intense media coverage of the death of a Syrian toddler who drowned as his family fled the war-torn country and a refugee crisis shaking Europe, which has put migration policy front and center in the October 19 elections.

The New Democrats say they are asking the current Conservative government to accept 46,000 refugees through 2019, 10,000 this year and 9,000 each of the next four years.

“Let us move forward with concrete measures focused on saving lives now and a stable plan for helping in the years to come,” New Democrat foreign affairs leader Paul Dewar said in announcing the migration plan.

Canadian Conservatives shot themselves in the foot with their refugee stingy policy.

Had they heeded the warnings of the Syrian opposition and the Arab gulf countries to remove Assad from power, the Syrian refugee tragedy would not have existed. Donald Trump is right when he says foreign leaders, like Putin, think we are stupid. They take advantage of our stupidity the way he is taking advantage of Barack Obama today on Syria.

The Conservative government has said it will accept an additional 10,000 refugees from Syria and Iraq, combined, per year over the next three years.

The Liberal party, the other major opposition party, has said the government should “immediately” accept 25,000 Syrian refugees.

Prime Minister Stephen Harper, leader of the Conservative party, has called for a several-fold approach that would welcome migrants but also step up military intervention in Syria and Iraq.

“I don’t know how you look at these images and conclude we should walk away and let those people be killed because we don’t want to participate in a military engagement. I think that’s completely irresponsible. Our reaction is we’re doing everything. We need to do more. We will do more on every front,” Harper said Thursday.

Too little, too late, Canadian Conservatives just shot themselves in the foot by ignoring Syria for too long.

The New Democrats and Liberals oppose greater military action, calling instead for a dedicated focus on the refugee crisis.

In making their announcement, the New Democrats said the UN has called on Western countries to resettle one million Syrians over the next five years, with Canada taking in 9,000 of those.

Are Conservative American Jews at Risk for Standing by Donald Trump?
What if Jews Numbered 1.5 Billion and Muslims 15 Millions?
Catholic Pope Francis Appeals to Orthodox Patriarch Bartholomew I
Things That Matter 382