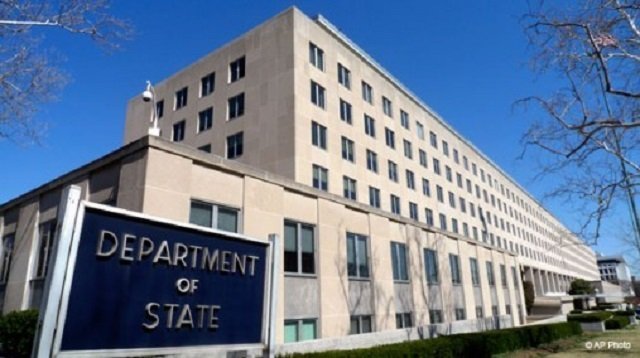 July 4, 2013 11:21 am 0
Trump mocks State Department’s 2015 boast of peace in Syria
Desperate Times at the US State Department
The Free Syrian Army vs. the Syrian National Council — Which Should We Support?

The US State Department spent $630,000 of US taxpayer’s money to buy 2.5 million Facebook “Like” on four different thematic pages using targeted advertising and marketing campaigns over a two-year period.  The program’s goal was to build global outreach platforms for engaging with foreign audiences. This is clearly a case of burying malaise of internal breach by buying praise for global outreach.

The report by the Office of the Inspector General, which disclosed the information, did not have nice things to say about this useless squandering of money at a time when the US Government’s debt has reached $16.74 Trillion.

The report claimed that only 2% (50,000 visitors) of those targeted actually bothered to visit the pages to share the information with their friends or followers.

Spending $630,000 to get 50,000 visitors over a 2-year period when one article in the New York Times can get 100,000 hits a day and earn adverting Dollars for the paper shows just how little the U.S. State Department is appreciated for its policies.

We are not experts on rescue missions of American Diplomats from harm’s way but we would imagine if the US State Department is so enthralled to “target foreign audiences for the purpose of engagement”, why can’t their officials “target US enemies for the purpose of saving American lives“?

Almost ten months to the Benghazi tragedy and the Obama Administration to this day has yet to target any foreign audience responsible for this senseless act of terror. The killers of four brave American diplomats and security officials still roam the streets of Benghazi free and beholden to no authority.

Maybe if U.S. State Department protected its own much better, people would flock to their pages out of pride for saving American lives instead of paying to have visitors pay them a timid look to their pages boasting defeatism of American might and power.

Something to think about.