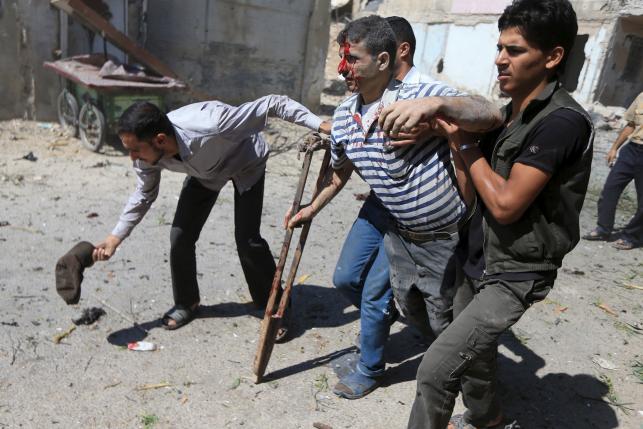 August 12, 2015 10:05 am 0
Down Memory Lane: The Pelosi Damascus Pilgrimage
Are We Inventing Intelligence Now?
Do Unto Others..

The violence came ahead of an expected visit by Iran’s foreign minister to Damascus to discuss a new plan to resolve the more than four-year-long civil war.

Bombing Damascus is a clear message to President Barack Obama that Iran, a non-Arab country, has no business interfering in Syria.

Warplanes targeted several areas in the insurgent-held district of Eastern Ghouta on the capital’s outskirts, activists on the ground said, killing at least 31 people and wounding another 120.

In YouTube videos that purported to show the aftermath of the strikes, emergency workers and residents pulled charred bodies from buildings damaged or reduced to rubble in the town of Douma to the northeast of Damascus.

activists on the ground said more than 50 shells hit central Damascus in a bombardment by insurgents that wounded 60 people. The state news agency put the death toll at five.

Central Damascus, Assad’s seat of power, has been mostly spared the worst of the conflict. Bombing Damascus this time around just before the arrival of the Iranian foreign minister Mohammad Javad Zarif is a message to Barack Obama that empowering Iran will continue to spark wars and conflicts in the region.

Foreign Minister Mohammad Javad Zarif was expected to head for Damascus from Beirut later in the day, according to Iranian state media. An Iranian Foreign Ministry spokeswoman said he would be discussing a new plan to resolve the war.

As long as Iran interferes in Syria, Syrians will continue fighting to cleanse Syria of all Khamenei traces of terror.

Iran has been a crucial ally for Assad during the war, which has killed over 300,000 people.