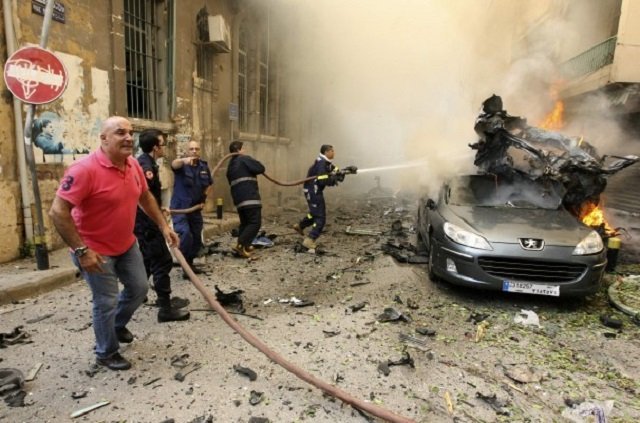 Hezbollah’s leader blamed Sunni extremists Friday for a car bombing that killed 22 people in a Shiite neighborhood south of Beirut, heightening fears that Lebanon will be dragged further into sectarian fallout from the war in neighboring Syria. Beirut bomb ups fear of fallout from Syria war.

In a defiant speech to his supporters, Sheik Hassan Nasrallah said he was prepared to double the number of his fighters in Syria if Thursday’s bombing turned out to be retaliation for Hezbollah’s intervention against Syrian rebels.

“If you think that by killing our women and children … and destroying our neighborhoods, villages and cities we will retreat or back away from our position, you are wrong,” he said.

Nasrallah said preliminary investigations showed Takfiri groups – a term for Sunni radicals – were likely behind the bombing in a predominantly Shiite suburb of Beirut, as well as other recent attacks.

Nasrallah, who has rarely appeared in public since Hezbollah and Israel waged war in 2006, spoke from a secret location to mark the anniversary of that conflict. His remarks were carried by satellite to TV stations and to a crowd of thousands gathered in a south Lebanese village.

Hours earlier Hezbollah supporters fired shots in the air at emotional funerals held for victims of the deadliest blast in Hezbollah’s south Beirut stronghold since 1985. Some 300 people were wounded.

As forensic experts collected evidence at the scene of the explosion, and security officials said they were investigating the possibility that the attack was carried out by a suicide bomber.

More than a dozen charred cars were scattered on the street amid heavily damaged buildings, preventing residents and shop owners from entering.

It was the second bombing in the area in five weeks. On July 9, a car bomb wounded more than 50 people. Since then, Hezbollah has tightened security with checkpoints and parking limitations.

Hezbollah’s strongholds have also been rocketed several times in the past few months.

Many in Lebanon see the attacks as retaliation for Hezbollah’s armed support for the psychopath Baschar al-Assad in Syria’s civil war.

Syrian rebels have threatened to retaliate against Hezbollah for intervening on behalf of the Assad regime in a conflict that is being fought on increasingly sectarian lines, pitting Sunnis against Shiites.

Hezbollah fighters played a key role in a recent regime victory in the town of Qusair near the Lebanese border, and Syrian activists say Hezbollah guerrillas are now aiding a regime offensive in the besieged city of Homs.

Nasrallah said his group’s participation in the war was limited. He said the war against extremists bent on destroying the region would be costly, “but less costly than for us to be slaughtered like sheep.”

He said there was no evidence so far to prove that Israel was involved in this or the other attacks, although he added that extremists could be working for the Jewish state.

Meanwhile, survivors of Thursday’s bombing spoke appreciatively of Hezbollah’s speedy rescue efforts, and voiced support for the group and its leader, Nasrallah.