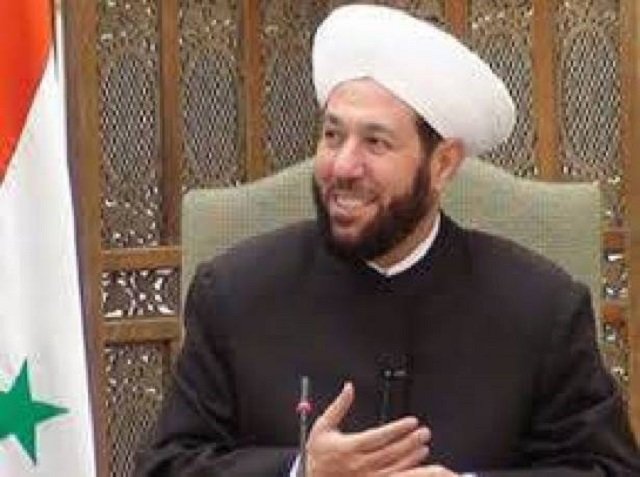 August 12, 2015 5:51 pm 0
While Assad Sits on $62B, He Rewards Veterans With Cans of Beans
Syrian Economy Could Collapse Any Day
Assad Torture Criminals Arrested in Germany

Mufti Ahmad Badr al-Din Hassoun, a pro-Assad head of Syrian Islamic clerics, was attacked during a lecture on Islam held in Algeria.

The Lebanese Ad-Diyar newspaper reported that attendees at the lecture that covered ‘Muslim enlightenment’ suddenly attacked and began beating Mufti Hassoun as they labeled him the ‘barrel bombs Mufti’ because he has refused to condemn the barrel bombs dropped by the Assad regime on innocent Muslims across Syria.

Hassoun is a lackey of the Assad regime. He is also known for his enmity towards Israel. His understanding of Muslim enlightenment is to call every rebel opposing the Assad regime a ‘terrorist’ and do Assad’s bidding in the name of Islam.

Algerian police interfered to protect Hassoun. Several of the beaters were arrested.

The label ‘barrel bombs Mufti’ appropriately describes the Mufti’s total apathy towards the killing of innocent civilians. To many Syrians, he is a charlatan and a rodent using Islam for pure self aggrandizement and power.

Just before he was beaten, the ‘barrel bombs Mufti’ was lecturing that Syria was in its final stages to defeat the ‘terrorists’ battling the Assad regime and that victory was near. Upon hearing this, many attendees simultaneously jumped him.

During his visit to Algeria, the ‘barrel bombs Mufti’ also met with the Algerian Minister of Religious Affairs and Endowments Mohammed Issa.

During the meeting, he announced that Algeria and Syria “stand together in one trench in defense of their nations and in support of Palestine, which is almost forgotten despite what happened to burning Palestinian children and attacks on the Al-Aqsa Mosque”.

To the lecture attendees, it was too much hearing ‘barrel bombs Mufti’ discuss Palestine while at the same time support the deliberate killing of innocent women and children.

Unlike Assad who has killed tens of thousands of innocent civilians, Israel, for the last four years, has been medically treating many Syrians injured by Assad and their families.

Israeli kindness has shattered the myth that it is Islam’s enemy when Hassoun, the ‘barrel bombs Mufti’ and a Muslim, refuses to condemn the deliberate butchering of innocent Muslim civilians.