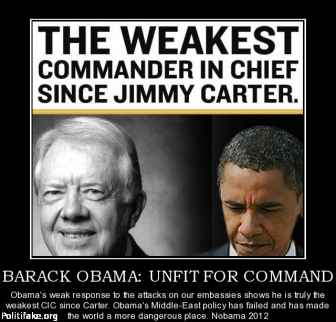 June 7, 2013 10:31 am 0
Useless Kerry Needs to Stop Inviting Himself
The Mother of All Stalemates in Syrian Civil War
The Unbiased Guide to Understanding The Civil War in Syria

Below is an article written by Charles Krauthammer in the Washington Post entitled “Message from the ruins of Qusair“. It details incessant missteps by Obama and how naive and clueless his administration has been with regard to his foreign policy on Syria. We read the title to mean: Barack Obama unfit to be President of the United States of America.

After reading this article, which sends an electric shock down your spine as you contemplate the utter incompetency of this President, we have come to a final opinion on this president: Barack Obama unfit to be President of the United States of America.

When America is led by an unfit U.S. President, our enemies gather around the gate to burst our confidence and safety. A Barack Obama unfit to be president means a weak America unfit to challenge her enemies.

You be the judge of Krauthammer’s article.

Message from the ruins of Qusair

On Wednesday, Qusair fell to the Bashar al-Assad regime in Syria. Qusair is a strategic town that connects Damascus with Assad’s Alawite heartland on the Mediterranean, with its ports and Russian naval base. It’s a major strategic shift. Assad’s forces can now advance on rebel-dominated areas in central and northern Syria, including Aleppo.

For the rebels, it’s a devastating loss of territory, morale and their supply corridor to Lebanon. No one knows if this reversal of fortune will be the last, but everyone knows that Assad now has the upper hand.

What altered the tide of battle was brazen outside intervention. A hardened, well-trained, well-armed Hezbollah force — from the terrorist Shiite group that dominates Lebanon and answers to Iran — crossed into Syria and drove the rebels out of Qusair, which Syrian artillery has left a smoking ruin.

This is a huge victory not just for Tehran but also for Moscow, which sustains Assad in power and prizes its warm-water port at Tartus, Russia’s only military base outside of the former Soviet Union. Vladimir Putin has stationed a dozen or more Russian warships offshore, further protecting his strategic outpost and his Syrian client.

The losers? NATO-member Turkey, the major supporter of the rebels; Jordan, America’s closest Arab ally, now drowning in half a million Syrian refugees; and America’s Gulf allies, principal weapons suppliers to the rebels.

And the United States, whose bystander president, having declared that Assad must go, that he has lost all legitimacy and that his fall is just a matter of time, is looking not just feckless but clueless.

President Obama doesn’t want U.S. boots on the ground. Fine. No one does. But between nothing and invasion lie many intermediate measures: arming the rebels, helping Turkey maintain a safe zone in northern Syria, grounding Assad’s murderous air force by attacking airfields — all the way up to enforcing a no-fly zone by destroying the regime’s air-defense system.

Obama could have chosen any rung on the ladder. He chose none. Weeks ago, as battle fortunes began changing, the administration leaked that it was contemplating possibly, well maybe, arming the rebels. Then nothing.

Obama imagines that if America is completely hands-off, a civil war like Syria’s will carry on as is, self-contained. He simply does not understand that if America withdraws from the scene, it creates a vacuum that invites hostile outside intervention. A superpower’s role in a regional conflict is deterrence.

(TFS Note: Barack Obama Unfit to be President of the United States of America)

In 1958, President Eisenhower — venerated by today’s fashionable “realists” for his strategic restraint — landed Marines in Lebanon to protect the pro-American government from threats from Syria and Egypt.

In the 1973 Yom Kippur War, Russia threatened to send troops on behalf of the Egyptian army. President Nixon threatened a U.S. counteraction, reinforced the Sixth Fleet and raised the U.S. worldwide military alert level to DEFCON 3. Russia stood down.

That’s how the region works. Power deterring power. Obama deals instead in empty abstractions — such as “international legitimacy”  — and useless conclaves, such as “Friends of Syria” conferences.

Assad, in contrast, has a real friend. Putin knows Obama. Having watched Obama’s retreat in Eastern Europe, his passivity at Russian obstructionism on Iran, his bended-knee “reset” policy, Putin knows he has nothing to fear from the U.S. president.

Obama’s response? No warning that such balance-altering provocations would trigger even the most minimal American response.

(TFS Note: Barack Obama Unfit to be President of the United States of America)

And when that WMD red line was finally crossed, Obama went into lawyerly overdrive to erase it. Is it any wonder that Assad’s allies are on full offensive — Hezbollah brazenly joining the ground war, Russia sending a small armada and mountains of military materiel, Iran warning everyone to stay out?

Obama’s response is to send the secretary of state, hat in hand, to Moscow. And John Kerry returns actually thinking he’s achieved some great diplomatic breakthrough — a “peace” conference that Russia will dominate and use to re-legitimize Assad and marginalize the rebels.

Just to make sure Kerry understood his place, Putin kept him waiting outside his office for three hours. The Russians know how to send messages. And the one from Qusair is this. You’re fighting for your life. You have your choice of allies: Obama bearing “international legitimacy” and a risible White House statement that “Hezbollah and Iran should immediately withdraw their fighters from Syria” or Putin bearing Russian naval protection, Iranian arms shipments and thousands of Hezbollah fighters. Which do you choose?