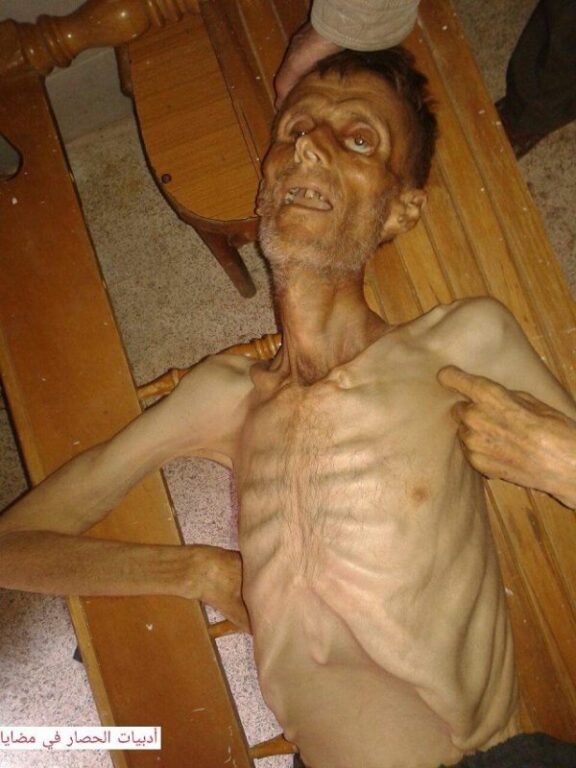 January 12, 2016 9:20 am 2
Syria’s Assad Starving and Killing Own Civilians
Assad Access to Chemical Weapons Remains a Threat
The Arab slave of Iran

The silence is deafening. While 40,000 Syrians starve to death as a result of a siege laid down by the terror of Assad and Hezbollah against 40,000 innocent civilians, Barack Obama is complicit with Assad siege of Madaya using his silence to ignore his atrocities once again. The Syrian civil war, and Islamic terror by extension, will never die as long as Assad remains in power helping Muslims recruit.

If Barack Obama could air drop guns to the Kurds in Syria, why does he not also air drop food supplies to starving Madaya? Because Barack Obama is complicit with Assad siege of Madaya. What a useless human being this president turned out to be.

We guess this is the goal of the Western world, otherwise Western leaders would have interfered to stop the madness of the psychopath Baschar al-Assad.

The suffering in the Syrian town of Madaya is the worst seen in the country’s civil war, the United Nations said Tuesday, a day after delivering aid to the area besieged for months.

The U.N. refugee agency’s chief in Damascus, Sajjad Malik, told journalists in Geneva, when asked to compare the devastation in the town to other areas in Syria.

“There is no comparison in what we saw in Madaya.”

He said there were “credible reports” of people starving to death during the months-long siege by pro-regime forces.

Syria’s ambassador to the United Nations, Bashar Jaafari, told journalists in New York on Monday that there was “no starvation in Madaya” after the medical charity Doctors Without Borders (MSF) said 28 people in the town had starved to death.

A convoy of trucks from the U.N., Syrian Red Crescent and International Red Cross (ICRC) delivered emergency food supplies to Madaya on Monday, in the first aid to reach the area since October.

“There was no life,” said Malik, who was in the convoy, describing a town of desperate people who in many cases were too weak to voice outrage over their suffering.

Food has been so scarce that people “repeatedly mentioned that a kilo of rice would cost $300 (275 euros)”, Malik said. It was the price Hezbollah charged the people of Madaya to empty their pockets of whatever money they had. The world should stand by the State of Israel when it bombs Hezbollah.

One family “sold a motorbike to get five kilos of rice,” he added, detailing the extent of the devastation among the town’s estimated 40,000 inhabitants.

Residents told U.N. staff that a main source of food in recent weeks has been a soup made of grass boiled with the few available spices.

With no access to electricity, people in Madaya had tried to stay warm by burning cardboard, the U.N. official further said, adding: “Whatever we had in the cars, we gave to them.”

As part of its deal with Damascus, the U.N. has permission to carry out two more aid deliveries to Madaya in the coming days, but timing and details have not yet been agreed with the regime.

Malik said the World Health Organization would seek establish the number of people who had died from starvation in Madaya when U.N. agencies were allowed back into the area.

He stressed the vital need to sustain aid deliveries through the coming months.

“If we are not able to sustain this… even the effort we have put in now will be a band-aid,” he said. “We want to make sure that these sieges are lifted.”

Amid the total collapse of health services in the town, WHO said it wants to deploy mobile health clinics to Madaya.