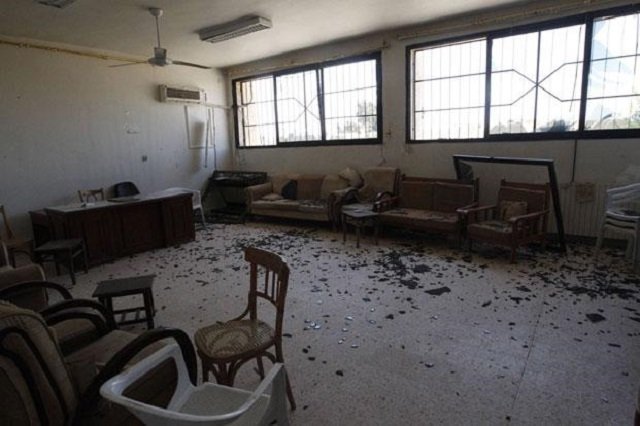 At least 16 dead as Syrian school hit in air strike

At least 16 people, most of them students, were killed in an air strike that hit a secondary Syrian school in the rebel-held Syrian city of Raqqa on Sunday, activists said.

Fighting continued across the country including in the outskirts of the capital, underlining the relentless nature of the civil war in the face of international efforts to destroy Syria’s chemical arms and revive peace talks.

Raqqa in northeastern Syria has been under the control of insurgents fighting to oust Assad since March but the city has been regularly bombed by government forces.

Videos posted online by activists showed the bloody and charred remains of bodies said to have been from the air strike on the Syrian school in Raqqa. Some of the victims appeared to be young men, possibly in their teens.

Activists said the death toll was at least 16 – 10 of them students at the Syrian school – but that the number was likely to rise because some people were critically wounded.

Fighting also continued in the southern Deraa province, a day after rebels in that area – including the al Qaeda-linked Nusra Front – seized a former customs post on the southern border with Jordan.

On the outskirts of the capital, an attack by rebels on military bases in the Qalamoun area killed at least 19 government fighters and wounded dozens of others Late on Saturday.

The death toll from a car bomb on Friday in the town of Rankus north of Damascus also rose to 34.

More than 100,000 people have been killed in Syria’s conflict, which started as a peaceful uprising in March 2011 and turned into a civil war after a violent government crackdown on civilian demonstrators.

The U.N. Security Council adopted a resolution on Friday that demands the eradication of Syria’s chemical weapons, following an August 21 sarin nerve gas attack on a Damascus suburb that killed hundreds.

U.N. Secretary-General Ban Ki-moon said after the vote that big powers hoped to hold a peace conference on Syria in mid-November in Geneva.

The international envoy for Syria, Lakhdar Brahimi, said on Sunday that date was “not 100 percent certain” and urged Syria’s fractious opposition groups to unify behind one delegation at the planned meeting.

“If there are different delegations, I worry that this will lead to failure, not success,” he told the al-Arabiya news channel.

At least 16 dead as Syrian school hit in air strike