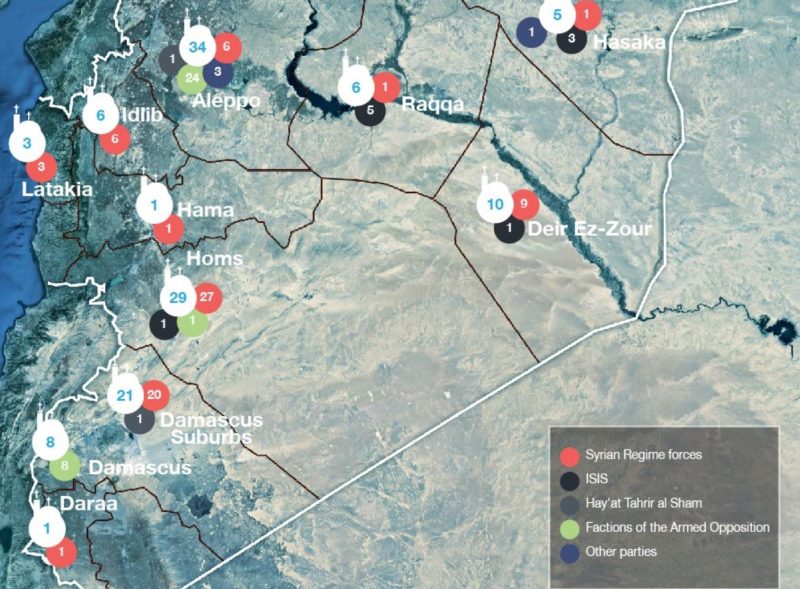 The Syrian Network for Human Rights (SNHR) published a disturbing report about the Christian faith in Syria. SNHR discovered the real Assad threat to Levant Christians by the number of churches he bombed deliberately. The report cites Assad attacked at least 75 places of Christian worship. In a span of eight years.

The extremist Islamic groups destroyed 12 churches over the last 8 years. For those, among us, who like to crunch numbers, the data points to Assad attacking about 3 churches every four months.

One would surely expect, given their enmity to the Christian faith, for the Islamists to commit such acts of destruction. But very few expected, or knew, the extent of Assad involvement in destroying churches.

No one should doubt that regime change in Syria is the best possible outcome. Because the so-called protector of the Christian faith is, in reality, their terminator.

Bank this fact Patriarch Bartholomew I of Constantinople.

The report pretty much went under the radar. We only know of the Christian Broadcasting Network (CBN) publishing an article it entitled with these strong words: “Assad Regime Named Number One Threat to Syria’s Christians After 120+ Churches Intentionally Attacked”

In the Executive Summary of the report, SNHR documented these kinds of attacks:

A large number of Christian places of worship have been subjected to more than one at-tack, by one party or two or more. For example, the Church of the Lady of Peace in Homs suffered seven attacks, all by Syrian Regime forces, while the Church of Saint Takla in Damascus Suburbs suffered four attacks, which were also all by Syrian Regime forces as well. Meanwhile, the Roman Orthodox Church of the Holy Cross in Damascus suffered four attacks, all of which were by factions of the Armed Opposition, while many churches in Aleppo in 2012 and 2013 were subjected to attacks by factions of the Armed Opposition in the course of engagement with Syrian Regime forces, as in the case of the new Syrian Orthodox Patriarchate, which was subjected to three attacks.

So much for Christians believing Assad is the answer to their protection when his troops, on several occasions, deliberately attacked their churches. The Christians, in our opinion, fear some of the Alawites belonging to the Assad Kalbiyya tribal clan. A clan known for its savagery, and treachery if you ask the Alawites from the Khayateen clan.