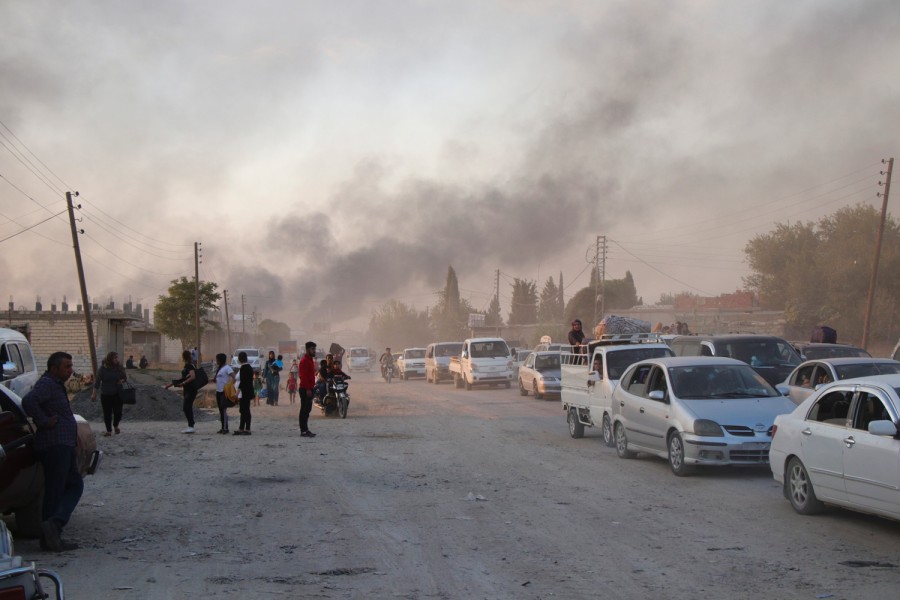 January 28, 2020 2:47 am 0
Erdogan Asked Putin to Step Aside in Syria
The Jihadist Foreign Fighters in Syria
Defeated ISIS Will Regroup Due to Short-Sighted U.S. Policy

A renewed drive by the psychotic Baschar al-Assad to recapture rebel-held territory in Syria’s northwest sparked a fresh exodus of tens of thousands of civilians toward Turkey’s border on Monday amid heavy air strikes as Assad terrorizes Idlib civilians.

Syrian government forces backed by Russian air power have stepped up a campaign to recapture Idlib province. It is the last stronghold where millions took refuge after fleeing other parts of Syria earlier in its nearly nine-year civil war.

A war monitor said Assad’s forces had since Friday wrestled control of 22 towns. They had cut through a strategic highway in Idlib that links the capital Damascus to Aleppo in northern Syria.

It said the Syrian army had encircled and was close to capturing Maarat al-Numan, an urban center 20 miles south of Idlib city. This would mark a significant advance for Assad’s drive to take back all of Syria.

A rescue worker who posted a video from Maarat al-Numan said the city had been devastated by an assault of barrel bombs, missiles and shelling in recent days that had laid waste to scores of homes and vital infrastructure.

The civil defense force worker aid, who did not identify himself, said:

Marat al-Numan is completely destroyed and its population has been displaced and is living in uncertainty.

Moscow and Damascus say they are fighting jihadist militants that have stepped up attacks on civilians in Aleppo. However, rights groups and rescue workers say air strikes have demolished hospitals, schools and other civilian areas.

The renewed fighting comes despite a Jan. 12 ceasefire deal between Turkey and Russia.

Fouad Sayed Issa, an aid worker with the Violet Organization in northern Syria, said Assad’s latest campaign has frightened Syrians in the rebel enclave who fear death or arrest if their towns are recaptured.

Over the past few days we have seen thousands of new internally displaced persons and we are talking here at the very least about 50,000 over the past four days.

A witness said that thousands on Monday fled from the Idlib towns of Ariha and Saraqib. Witnesses saw trucks and cars crawling in gridlocked traffic toward areas close to the Turkish border. The town of Azaz is one of their destinations.

On the ground witnesses estimate that about 120,000 people had fled from countryside around Aleppo and Idlib over the past 12 days. Aid workers said most have moved to relatively safer parts of northern Syria near the Turkish frontier.

Turkey, which backs the Muslim Brotherhood, already hosts more than 3.5 million Syrian refugees. It fears that millions more could soon cross the border.

Enmity between the Assad regime and the Muslim brotherhood go back to the early seventies. It resulted in the infamous Hama massacre of 1982. Rifaat al-Assad, Baschar al-Assad’s uncle, massacred some 30,000 civilians to kill few hundred Muslim Brotherhood fighters.