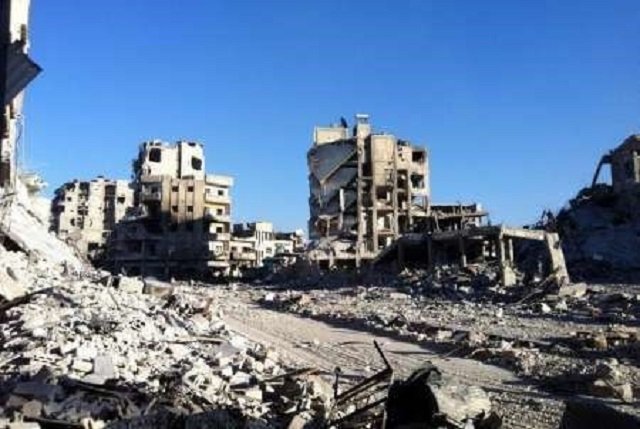 September 27, 2015 12:00 pm 0
The Retirement Gift of Lakhdar Brahimi
I don’t get the Jew haters
Obama Symbolizes The Kid in the Toy Store Syndrome

The Syrian army fired a missile into the last rebel-held neighborhood of the central city of Homs killing 17 people, most of them civilians, a monitoring group said on Sunday.

According to activists on the ground, four children and four women were among the dead in Saturday’s strike. This the Assad tactic surely to increase the flow of Syrian refugees to Europe.

Nearly all of Homs has been under government control since rebel fighters pulled out of the historic heart of the city in May last year under a U.N.-brokered deal to end a devastating two-year siege.

There have been repeated efforts to organize a similar deal for the Waer neighborhood where more than 100,000 civilians live under rebel control surrounded by government forces.

A number of temporary ceasefires have been arranged to allow in aid but a lasting truce has proved elusive, with each side accusing the other of hobbling the negotiations.

The Assad tactic of launching missile strike against civilians came as a U.N.-brokered truce deal to evacuate 10,000 civilians from two pro-government villages in northwestern Syria under siege by rebels ran into trouble on Saturday.

Protesters in neighboring rebel-held territory in Idlib province blocked roads, preventing the planned evacuation by the Red Crescent from getting under way.

The rebels, who have laid siege to Fuaa and Kafraya for two months, agreed to their evacuation in return for safe passage for some 600 rebel fighters who have been surrounded by pro-government forces in the town of Zabadani near the Lebanese border.

Syria’s third largest city, Homs was one of the first places where rebels took up arms against Assad’s rule in 2011.

But after years of fighting which killed tens of thousands of people and caused widespread destruction, the suburb of Waer is the last redoubt of the rebels.

To be or not to bee
Assad isolating Syrians for ethnic cleansing
Memo to Suleimani: Syria is Not Iraq
Assad Genocide 429