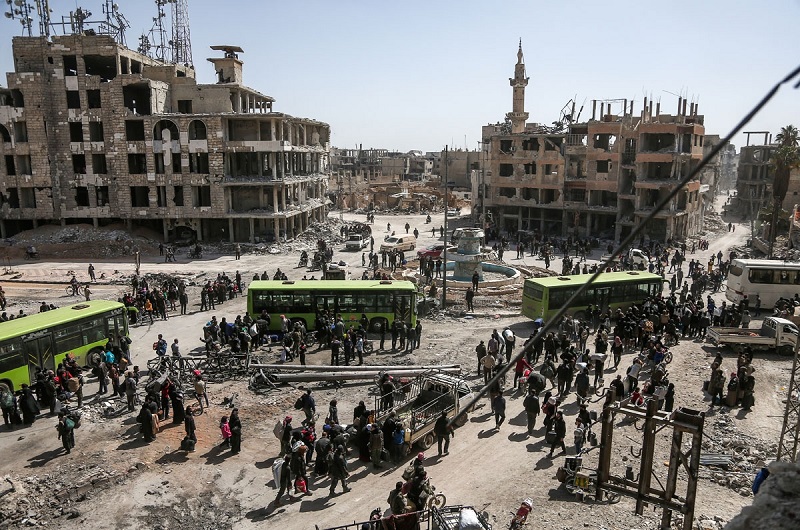 March 15, 2020 3:07 am 0
Will Joe Biden Hold Syria Iran and Russia Accountable for Their Crimes?
Russia is Playing God with Syrian Lives
The Coronavirus May Have Saved More Syrian Lives

Even though the Assad regime claims war-ravaged country is coronavirus free, Syria has delayed parliamentary elections, shut down schools and canceled most public events to prevent any spread of the coronavirus. WHO officials believe Syria is hiding cases just as Assad lied he never used sarin gas to suffocate innocent women and children.

On Saturday, Education Minister Imad al-Azab told a news conference the Syrian Government is closing schools until April 2. He claimed to the local press that it was “not possible” for the government to conceal infections.

Welcome to the Arab North Korea of our times.

CORONAVIRUS FREE BUT WE ARE TAKING EXTREME MEASURES

Damascus said on Friday that all scientific, cultural, social and sporting events would be halted; as well as many public institutions would be closed or staffed at 40% of normal levels. The government also reduced working hours.

The government went further on Saturday, postponing to May 20 parliamentary elections previously slated for April 13. A top religious council, meanwhile, said that Mosques are suspending Friday prayers until April 4.

War monitoring activists said Syrian doctors had detected cases of the virus in Damascus; as well in at least three other provinces but were under orders to keep quiet.

Pakistani health officials said on Tuesday that at least five of their country’s cases originated from patients traveling to Pakistan from Syria via Qatar.

It was not immediately clear whether the infections could have originated in Qatar, where cases have risen to 337, the highest among the Gulf Arab states.

Syria is one of just three countries in the Middle East that have yet to announce a confirmed coronavirus case. Libya and Yemen are the other tow. Wars and conflicts have also devastated both.

The three nations could face a daunting challenge to contain an outbreak after years of war that have ravaged their health care systems.

Syria had already suspended flights to and from several countries hit by the virus including Iran. Both countries are not suspending military flights to deliver weapons and terrorists to kill civilians.

Iranian militias back Damascus in its nine-year war. Usually, Syrians flock to Iranian holy sites such as Qom, where Iran first detected the virus.

Assad is Blocking Coronavirus Testing to Areas Outside His Control
Why Did Shoygu Fly to Damascus to Meet Assad?
American Capitalism is Vulnerable to National Disasters
Coronavirus Pandemic 45 Dumb Assad 95 Syria News 1210