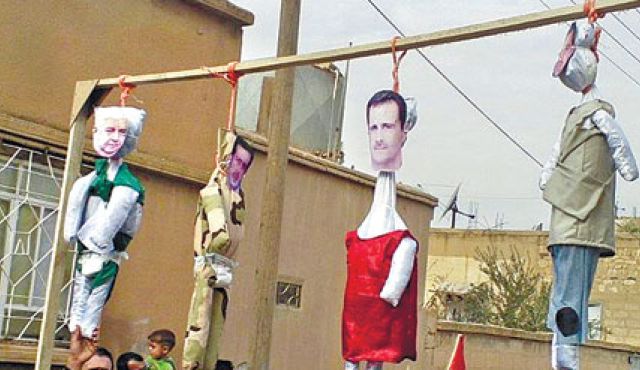 After Iran, Assad Number is Up

Washington DC – September 22, 2009 – (Farid Ghadry Blog) — There is a tremendous anticipation in the air. From afar, it looks like several trains are converging on the same bifurcation with none willing to stop.

The Iranian extremist regime of Khameini keeps upping the ante with its stubbornness to build a military nuclear arsenal hidden behind a civil nuclear program. At the same time, Ahmadinajead rubs everyone the wrong way when he denies his own people the decency of their rights, interferes in the internal affairs of other countries (Lebanon), and threatens others with extermination (Israel). How different is Ahmadinajead from Hitler?

Moreover, Iran is spreading its wings beyond its borders by undermining many Arab regimes simultaneously. Earlier this year, the Egyptians discovered Hezbollah cells trained to conduct terror operations against State-owned assets. In Kuwait, some were captured with plans to attack US bases. In UAE, Iran has infiltrated the most sensible of establishments so much so that the government is quietly refusing to renew Visas for thousands of Iranians.

In the US and abroad, there is a critical mass gathering against the Iranian regime. Calls vary from outright regime change, to support of active reformers inside the country, to an imminent strike against military and nuclear suspected sites, are all echoing inside the Oval Office. Although avoiding war with Syria and Iran has been a cornerstone of the Obama administration foreign policy, many analysts believe that lack of resolve coupled with lack of real risk assessment of what Iran is capable of can be disastrous given the small margin of error the White House is working with. The questions becomes: If the extra mile of the unclenched fist policy of Obama provides no exit strategy but a military action, then would it be too late to reverse the Iranian gains. When is it too late?

The fact that many eyes are directed at thwarting the Iranian threat has convinced him that he is off the hook. Temporary, yes. But not for long.

Assad believes he has defeated the United States. Seriously. Since Assad is incapable of such deep thoughts, someone close to him must be hallucinating and feeding his ego some remarkable composition. Nevertheless, his unabated terror against Iraqis, if added to the threats he recently leveled against returning violence to Lebanon and the random shells he orders against Israel, should be a cause for more than concern.

Governments around the world are becoming tired of Assad and his terror. We have seen this recently when the Iraqi government of al-Maliki took to the airwaves to shake his regime a bit. As patient and diplomatic as the west appears in public, I have this sense that most are seething with anger behind walls. Even the most patient of appeasers have a propensity to throw their arms up in the air after taking so many hits on the shin and call it a day. Regime change for Syria is still in the drawer but I believe it is a question of time before they are dusted off. Unlike past mistakes, when it happens this time, it will surprise everyone. Asma should consider a contingency plan to pack quickly her shoes.

If and when Iran falls, Assad will do his earnest to join the western alliance. He will acquiesce to all their demands aimed at safeguarding his neighboring countries, including giving-up on a secretive and potent nuclear program. But that will not be enough because many know Assad will be waiting for his opportunity to strike again if necessary thus recycling himself into the same violent dictator exposed before us today. There is a fact that Assad and his thugs are missing in their calculations: No on trusts Assad anymore. Too many have paid dearly politically for their support of his policies.

On the surface, this train seems to be attempting to slow all the other trains to avoid the wreck that must happen to balance the Middle East again in favor of US allies. But deep within, the Obama administration needs approvals more than successes. The pressure on the White House is mounting and it is a question of time before Obama is forced to make the right decisions. Enough said. Just watch the news before his first year in office is up. Those weekend media blitzes are aimed at depressurizing the Oval Office.

Nothing unites Israelis more than the behavior of Ahmadinajead and his threats. When it comes to their safety, Netanyahu has a Carte Blanche to eliminate the Iranian nuclear threat and given the slow process of negotiations with Iran, it is a question of time before the Israeli government decides it has no choice but to defend the country from the Ahmadinajead plague.

In spite of news leaks to the contrary, I believe (again without any access to any information of any kind) Israel will eventually exercise a military option to weaken Iran and to remove the nuclear threat it faces. Along the way, the oppressive institutions of the ruling government will take enough of a licking to empower the reformers to overthrow the government. The stage is set and as many intelligent analysts are predicting, the Iran regime is standing on a cliff with the wind whiffing by. The Israeli military strike will certainly start the process of a gusty wind hitting a cliffhanger.

The momentum created by the defeat of Iran will force the Obama administration to look at Syria from a different lens and perspective aided by the Lebanese and the Iraqi lobbyists in Washington in addition to few Arab countries eager to see Assad operate an Ophthalmology clinic in England rather than rule a country.

This is when the Syrian opposition must jump at the opportunity by showing statesmanship. Its fractured state must heal and its leadership must set aside its differences for the common good of Syria and Syrians. Because failure is not an option, RPS is concentrating all its efforts to create the critical mass necessary for such eventuality.

Any leader springing for unity will find international support and any leader believing he can ride to the front line alone, will be left to soak the heat generated from the mass we are creating. No dissent against unity is allowed and no selfish behavior will be tolerated. Much is at stake in this second round to save Syria to allow anyone, no matter the circumstances, to bolt unchecked or to destroy saving Syria from the Assad legacy of doom. Assad number is up.

When the Iraqis felt their unity will provide salvation for their country, they set aside their differences and met in New York to start the process of returning home with the duty to build a nation from the ruins of Ba’athism. Syrians are certainly capable of the same unselfish gesture.

Most importantly, no one will be able to stop us this time around. Our strength lies in understanding that our rights for freedom, democracy, and human rights for Syria is a birthright and not a privilege.

After Iran, Assad Number is Up