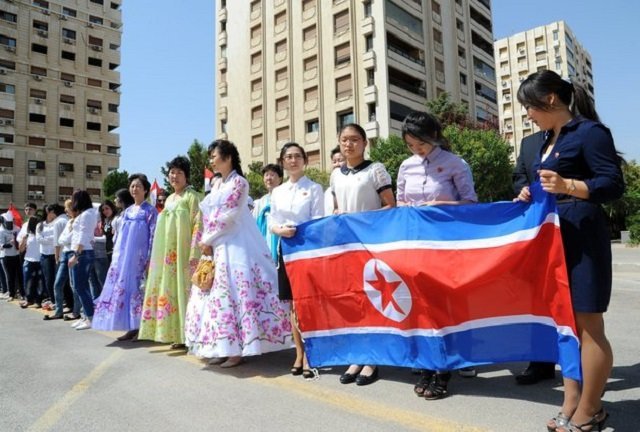 September 1, 2015 2:48 pm 0
The Face, The Muscle, and the Brain
Iran Tells Syria to Attack Israel on the Golan Heights
The Non-Punishable Terror of Car Bombs

An article in the Huffington Post entitled “Syria Names A Park After Kim Jong Un’s Grandpa” is raising some eyebrows. The title should have been “Assad Names Park …”, and not Syria. Syria is a prey in Assads’ claws.

The article explains the event with those two opening paragraphs:

North Koreans gathered Monday in the Syrian capital of Damascus, where authorities held a ceremony dedicating a park to the Hermit Kingdom’s late founder, Kim Il Sung. Members of the North Korean embassy watched as official Fairouz Moussa gave a speech praising their nation’s support for the Syrian government, according to state media agency SANA.

Syrian President Bashar Assad’s embattled regime doesn’t have many international allies, as nations and rights groups routinely condemn its horrific attacks on civilians and its human rights abuses. The government also lacks control over a majority of its territory, as various rebels and militant groups like the Islamic State carve up the country. But the Syrian regime is not without its sympathizers, among which is fellow pariah state North Korea.

The park is located in Kfarsouseh, which is the district where Imad Moughniyeh was assassinated on February 12, 2008. Is that ominous for the Jung Un family or what!

How many times does Assad sell Syria over to the undesirables and the rogues? Iran controls Syria militarily, and now North Korea controls Syria’s recreational parks. Are the Syrians lucky or what!

How many leaders would honor the crazy if they were not crazy themselves?